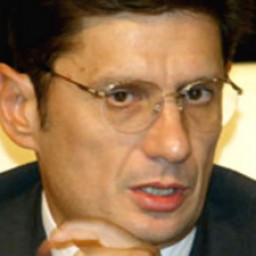 Leonid Fedun was born April 5, 1956 in Kiev. He was educated in the Rostov Higher Military Command School, which he finished in 1977. In 1984 he graduated from Adjuncture of the F.Dzerzhinsky Military Academy., then worked as a teacher of political science and economics at the Military Academy. In November 1992, he went into business, founding LLP «Neftkonsult». In 1993 he finished the High School of Privatization and Entrepreneurship with a degree in sociology, and work with securities.

After his dismissal from the Armed Forces of Russia in 1993, he became CEO of ZAO "LUKoil-Consulting".

Since March 1994 - Vice-President and Director of the Board of «LUKoil».

Since 1996 - Vice-President of OAO “LUKoil», Head of future development and operations with securities.

In late 2003, Fedun became the actual owner of football club "Spartak" (Moscow), buying for a little more than $ 70 million a controlling stake from the former club president Andrei Chervichenko. Fedun invested in "Spartak" his personal funds, and attracted major sponsors. Nowadays Leonid Fedun has been serving as chairman of the board of directors of "Spartak".

Fedun is a head of the board of directors in the Investment and Finance house (IFH) "Capital", which is a part of the board of non-profit organization " Russia's Association of Marketing», Supervisory Board of LUKoil-Petrochemicals.

In LUKoil Leonid Fedun was in charge of issues related to company corporisation, selling its shares at voucher auctions, the deployment of ADR on the London Stock Exchange.

IFH «"Capital"»- the financial group, formed in early 2003 through the merger of a number of major companies of the financial sector in Russia. The basis of IFH "Capital" consists of LUKoil non-core assets in the banking and investment spheres. Along with Fedun the main beneficiary of IFH "Capital" is the chairman of the company" LUKoil "Vagit Alekperov. IFH "Capital" includes the following structures: Bank Petrocommerce, Investment Group" "Capital" "(Managing company "Capital" , investment company" Capital "), as well as the company - administrator of pension funds LLC "Pension Capital "(NPF «Pension Capital", NPF «First Pension Fund, NPF "LUKoil-Garant").

In addition to Russia's business IFH "Capital" has established a unit in Ukraine, which also combines banking, pension and investment businesses. The cost of the Fedun's take in IFH "Capital" is a fairly significant part of his personal fortune.

Leonid Fedun - Ph.D. in Philosophy; Married; He has a daughter and son. His Daughter Catherine (born in 1986) is a student in the Department of "Public Relations", Faculty of International Journalism, MGIMO.
Source: www.lpl.org.ua/biography

In early 2000, "Vedomosti" newspaper posted an interview with Leonid Fedun, in which journalists took interest in the question of who was behind the Cypriot company «Reforma Investments»; it had acquired 9% of Russia's government-owned shares of LUKoil. Then Fedun hid the fact that the company "LUKoil Investment Reserve» (Kalmykia), having registered the Cypriot company, was under the complete control of LUKoil. They also doubted the legality of the transaction - the company paid only $ 200 million for a 9% stake to the government of Russia, as a few months before the deal Nikoil Registration Company (Moscow) had been artificially decreasing the price of LUKoil shares for several months; at the time of the purchase of shares by Reforma Luvestments the stock prices had declined in four times. At the same time, Leonid Fedun and Vagit Alekperov were accused of rigging the market of their own shares. After the incident with the sale of shares they began to talk about the mysterious death of one of the main founders of LUKoil Vitaly Schmidt - he died under very strange circumstances, and it was only after his death when Fedun and Alekperov transferred LUKoil's offshore center to Cyprus.
Source: "Novaya Gazeta" from 21.02.00

In 2001, Fedun became an active player in the conflict situation around MNVK "TV-6". They accused Fedun eliminating the independent channe on the orders of the Kremlin. In particular, deputy head of the faction "Yabloko" in the State Duma Sergei Ivanenko claimed that. Fedun took the position that personal problems of Fedun and largest shareholder of TV-6 Boris Berezovsky allegedly caused the closure of the channel. They were opponents for membership in political parties in the Duma elections, Berezovsky won and «washed out” his share of the channel), and Fedun solved all the problemsby closing the channel. Then Fedun completely denied any affect of Russia's government to the solution. He later said that LUKoil was ready to take part in competition on sale of "TV-6" property, and to buy a broadcasting frequency of the channel in the case of announcement of its liquidation.
Source: www.slon.ru from 19.05.2009, www.newsru.com from 13.12.2001

The story of the mysterious Cypriot offshore Reforma Investments again appeared in the newspapers in 2004. Now Fedun does not make any secret of who is behind the company "LUKoil-Reserve-Invest», which registered the Cyprus company. When Nikolai Tsvetkov bought the Fedun's share in the company «NIKoil»t, Fedun began to develop LUKoil-Reserve-Invest "actively which later became known as the "Capital".
Source: "Bulletin" from 04.03.2004

Leonid Fedun criticized assessment of his fortune specified in the rating of Forbes. He considered virtual An amount of 1.7 billion dollars stated the rating of Forbes. Fedun argued that in fact not all the shares of the company written to him in the international reporting did belong to him; some of them Fedun was holding for the company management and could not dispose of them.
Source: "Bulletin" from 13.05.2004

In 2006 Leonid Fedun announced accusatory facts from biographies of some leaders of the sports committee. For example, Fedun said that once when he stood behind the head of the CFA Nicholay Levnikov, who was talking to the unknown man and told him that he judged the match as agreed. Fedun also accused Pavel Kulalaev, judicial arbitrator of corruption.
Source: "Novye Izvestiya" dated 15.12.2006, Gazeta.ru was dated 13/12/2006

Leonid Fedun is believed to initiate the dismissal of one of the famous football functionaries Yevgeny Giner. On the eve of elections the head of Russia's football premier league Fedun said that he had documents allowing to reconsider the results of the championship of Russia, and the gold medal gained by players of CSKA. Giner was forced to withdraw his candidature from the next elections fearing of exposure.
Source: "Time of news" of 27.12.2006

In the foreign press they said that Leonid Fedun and Roman Abramovich paid 9 million euro for a ticket of the team of Croatia to to get to EURO 2008. Subsequently, the Croatian national team received 9 million and divided the sum equally among the 33 members of the team (players and coaches). There was a rumor also that Leonid Fedun offered Croat federation 4 "Mercedes" cars for a victory over the English in Wembley.
Source: www.jewish.ru/news of 03.12.2007

In 2008, IFH "Capital" completed the deal on sale of an insurance group "Capital" to the Cyprus company Syneron Holdings Limited. The cost of the transaction which had lasted from 2007 amounted to more than 500 million dollars. The buyer appeared to be CEO and co-owner of «Rosgosstrakh» Danil Khachaturov with partners. Hachaturov did not disclose his partner.
Source: "Bulletin" from 25.08.2008, www.maonline.ru on 16/02/2010

In spring 2008, Leonid Fedun planned to invest over $ 1 billion in major projects dealing with non-ferrous metallurgy, but he did not manage to do that and saved his money actually- capitalization of steel companies amid the global crisis was severely decreased. In addition, Fedun planned to build a stadium for the football club "Spartak", but again because of the crisis his projects went awry.
Source: "Russian Forbes», 05. 2009