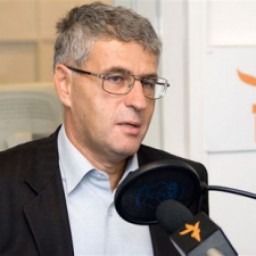 1992 He met Yegor Gaidar and worked for him as an advisor. Since 1993 he is a member of Choice of Russia movement.

1995 He took part in the State Duma elections as a candidate from Democratic Choice of Russia — United Democrats block.

August 2000 he campaigns for the Union of Right Forces block

2000 member of the board of RAO UES of Russia

28 May 2005 he is elected the deputy head of federal political board of the Union of Right Forces. At the elections to Moscow’s city council (of the 4th convocation) he was against the coalition with Yabloko party

October 2008 he is appointed an advisor to Anatoly Chubais, the director general of Russian nanotechnology corporation Rusnano

16 November 2008 at the founding conference he was elected co-chairman of the Right Cause political party.

Gozman is an assosiate professor for the social psychology department of the faculty of Psychology of Lomonosov MSU. He authored 8 books, including Psychology of Emotional Relationships (1987) and Political Psychology (1996, together with psycologist Yelena Shestopal)

Gozman is married and has a daughter and a granddaughter.

Gozman combined political activity with work for RAO UES of Russia. In early 2000-2002 he was elected to the board of Khabarovskenergo JSC, Dalenergo JSC, Lenenergo JSC.

In 2003 Gozman ran for the State Duma as a representative of the Union of Right Forces, but the party failed to reach the threshold and Gozman did not become MP. After the defeat party leaders, including Anatoly Chubais, Yegor Gaidar, Boris Nemtsov and Irina Hakamada, resigned from their posts, leaving the presidium of political board to govern the party. In 2004 Gozman became member of the board, responsible for ideological issues. Gozman was pushed through by Chubais who wanted to have the party afloat after the defeat.

In 2006 Gozman was the only high-profile politician who publicly supported gay-parade in Moscow. Gozman addressed Cyril, Russian Orthodox metropolitan, with an open letter, saying that “banning gay parade is a threat to the society”.

In 2007, Gozman as a candidate at the State Duma elections tried to conceal (from central electoral commission) the income of 448,130,750.85 roubles ($16m) he received from Uralsib Capital LLC.

In autumn 2009, when the election campaign was in full swing, Gozman asked president of Russia Dmitry Medvedev to sack Moscow mayor Yury Luzhkov, who was no.1 on the party list of the United Russia, in an open letter posted on netlujkovu.ru. On September 22, Luzhkov filed a libel suit againts Gozman and Ren-TV, accusing Gozman of defamation in a statement aired by the channel in July 2009. By turn, Gozman filed a libel suit against Luzhkov, asking Moscow's Tverskoy Court to oblige Luzhkov to pay him Rub642 m ($22.5m), his family's monthly income as reputational indemnity.

In Autumn 2009 Gozman launched an internet site which gathered signatures in support of resignation of Moscow mayor Yury Luzhkov. After the first day 100,000 people left their signatures, Gozman claimed. The inquiry, organised by Yabloko party, found out that almost all signatures were fake. Unique visitors counter (provided by liveinternet.ru) was just a picture laid upon the true counter: the picture showed 120,000 visitors, while the real number was just 3. Soon after the inquiry liveinternet.ru excluded Gozman's site from its rating.

In December 2009 Boris Titov resigned as co-chairman of the Right Cause. He said he was not going to leave the party, but resigned due to the conflict with Gozman. Titov considered the Right Cause as the party of middle class, formed to represent its interests, whereas Gozman’s approach was to focus on political activities, not business lobbying.

In May 2011 co-chairmen of the Right Cause Leonid Gozman and Georgy Bovt said to the journalist they would resign as the party leaders. “I have made up my mind. I will not stand for a member of a new political board”. Gozman said he would not leave the party, but did not want to meddle in the business of a new party boss Mikhail Prokhorov.