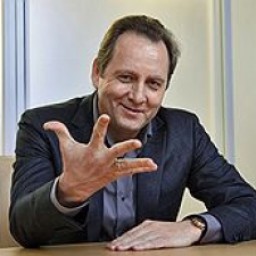 Leonid Maevsky was born on 6 September 1960 in Rubtsovsk in Altai region.

In 1982 he graduated from Makarov Pacific Higher Naval School in Vladivostok where he studied radio electronic weapons for submarines. He completed the Higher Officers' Course and is a doctor of Technical Sciences.

In 1996 -1999 he worked as technical director of the All-Russian Radio; then he was the general director of Novye tekhnologii - XXI Vek in Moscow.

In 1999 Maevsky was elected to the State Duma of the third convocation from the association of the Communist Party electoral list.

Since 2003 he has been the owner of LV Finance.

He is married and has a son and a daughter.

On the eve of 1999 parliamentary elections, Communist Party leadership suddenly turned its attention to a promising young man who was not a member of any party and was not engaged in any political activities. He was not just accepted into the party, but he was entrusted to represent the Communist Party in the Duma. This was how Leonid Maevsky, State Duma deputy from the Communist Party, became a politician.

In the media there were hints that Maevsky got a Duma seat as a gift from the Communist Party in exchange for donations to the election funds of the party. Mass media even pointed to specific companies, in particular, the consortium Alfa which owns several telecommunications companies, the most famous of which is VimpelCom.

In the Duma Maevsky was on the Committee on energetics, transport and communications.

In June 2000, Leonid Maevsky received his doctoral degree after defending his thesis on "Resource-saving methods ensuring the reliability of telecommunication systems in the design and operation"  in All-Russian Research Institute of Computer Science and Informatization. Three years after that scientists of St Petersburg Bonch-Bruevich State University of Telecommunications found severe violations in the abstract of his doctoral dissertation. The majority of works that were cited in the thesis were listed as his, which did not correspond to reality. Usually, even minor irregularities are enough for the Higher Attestation Commission to raise the issue of deprivation of applicant's academic degree. And Maevsky called himself the author of plenty of works.

In 2003, the communist Maevsky voiced critics concerning his party. He accused the party members in close contact with Boris Berezovsky. By themselves, these contacts are not criminal, but Maevsky exposed illegal financing of the Communist Party by Berezovsky through Rosagropromstroi. Maevsky said that last October he had visited Berezovsky together with Aleksandr Kravets, the secretary of the Communist Party Central Committee for Ideology.

In 2004, Prosecutor General Vladimir Ustinov received a request by deputies concerning ex-Duma member Leonid Maevsky. The figures mentioned in the document are extremely impressive and bear no comparison to the 3 million rubles allegedly stolen by the arrested Shashurin. Another shocking figures concern the alleged scope of offshore activities by the once active telecommunications lobbyist: "... In June 2003 (Maevsky’s term lasted for another six months. - Editor.) Palmer, 80% of the shares in which are controlled by Maevsky, bought the company which owned 25.1 % of MegaFon”. MegaFon is the third largest mobile network operator in Russia and the participation of chairman of a State Duma committee on communications points to abuse of office ... In August 2003, Leonid Maevsky sold these shares to another company. The amount of the transaction, according to some economists, ranged from 200 to 250 million U.S. dollars. It is not known whether Maevsky included the proceeds from the deal to his tax statement under the tax legislation of the Russian Federation...

In August 2004, Leonid Maevsky, head of LV Finance, was arrested at the airport Sheremetyevo-2 while trying to leave the country. The formal ground for the detention was the decision by October district court in Omsk which satisfied the petition of a group of people against Maevsky on the protection of honour, dignity, and business reputation. The court ruled to collect in favour of the plaintiffs 1.15 million rubles. However, the former lawmaker had more serious opponents. LV Finance, in particular, is famous for having sold its business including a blocking stake in mobile operator MegaFon to Alfa-Eko last year.

In 2005, Leonid Maevsky left Russia fearing arrest on charges concerning the sale of the blocking stake in MegaFon to Alfa Group. Previously Leonid Rozhetskin, former head of LV Finance, who was also involved in the sale, also left the country.

After the prosecutor's office officially announced that the call for questioning as a suspect had been a technical error, Maevsky returned to Russia and said that his company was interested in the upcoming issue of licenses in Russia for UMTS, the third generation of mobile network technologies (3G).

In October 2008, Maevsky sold 50% of the company Universal Telecom engaged in GLONASS and GPS geomonitoring to Alisher Usmanov. The other half of the shares remained in the hands of Maevsky and two former employees of Svyazinvest, Konstantin Kravchenko and Vladimir Lokhtin. The former is the general director of Universal Telecom and the latter used to be executive director of Svyazinvest.

In 2012, Voronezh region Arbitration Court introduced monitoring for Voronezh Ceramic Factory. The bankruptcy procedures were initiated by Sberbank that had claims worth 463.3 million rubles. According to Aleksandr Soloviev, head of the Central Chernozem Sberbank branch, "bankruptcy is a way to change the owner of the plant" and the process should not affect the operation of the plant. Voronezh Ceramic Factory is controlled by Rostov YuniTayl holding company, Russia's largest manufacturer of ceramic tiles with about a quarter of the domestic market. Leonid Maevsky was pointed to as the main contender for control over the YuniTayl assets.  Maevsky agreed with Sberbank to buy back the debt of the holding amounting to 4 billion rubles.