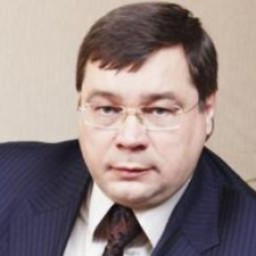 Leonid Makarevich (born 27 April 1961) was graduated from Ordzhonikidze Moscow Institute of Management with a degree in management in machine-building industry.

Makarevich is married and has two children.

As Electrozavod director, Makarevich has been out on a shop floor only once.

According to the accounting books, 93.7% of shares in Electrozavod are controlled by Vladimir Tatur, Andrei Kubar and Farida Urazbakieva. There is no information available about them. Market participants believe that it is a son of Soviet black-market businessman, Leonid Makarevich, who owns a controlling stake.

In 2000, a list of private companies linked to organized crime was published in the media. According to the document, Kuybyshev Electrozavod, MELZ Moscow Electro-Lamp Plant, and Salyut plant were controlled by Golyanovsko-Izmaylovskaya mob.

On 28 July 2006, the shareholders of Zaporozhye-based Research Institute for Transformer Building planned to hold an urgent meeting. Analysts expected that Elecrozavod, a Moscow holding company, would announce that it takes over control of the research center. The Russian company disputed with Konstantin Grishin over the ownership rights of the center.

In 1995, the scientific centre was privatized and transformed into VIT JSC with 53% of shares distributed the employees and members of their families and the rest held by Ukraine. At the same time, Konstantin Grigorishin, an owner of Metallurgiya Consortium, took interest in the Zaporozhye research centre. But due to the rules, established by Ukranian State Property Agency, Grigorishin had to wait until 1998 before he could buy shares in the research centre. In 2001, the State Property agency sold 25% of shares of the institute. The same year, the conflict emerged between Konstantin Grigorishin and Grigory Surkis. With bitter losses Grigorishin managed to keep the majority of his assets reregistering them as offshore companies. Currently, Grigorishin’s interests are being represented by Energy Standard Group. The group resumed talks to buy the research centre in Zaporozhye. At the same time, Moscow Elecrozavod Group took interest in buying VIT JSC. Electrozavod manufactures electric transformers.

Energy Standard offered 10 grivnas for a share of Vit with a par value 1 grivna per share, according to Viktor Choban, representative of the group, whereas Elecrozavod offered 25 grivnas for a share and announced its plans to invest 10 million US dollars in the institute and give it lucrative contracts. In March 2006 the controlling stake of the institute, that is 52%, was sold to the Russians. But that was only beginning of the struggle for the ownership. Energy Standard started a dozen of legal actions in Ukranian cities of Zaporozhye, Dniepropetrovsk, Odessa and Kherson, trying to put every legal obstacle to hinder the new shareholder from obtaining the company’s papers and holding shareholders’ meeting.

The scientific centre was reported to sign a $4 million contract with the Russians to design new equipment with a possible $1 million contracts in the nearest future. The analysts said that Electrozavod was linked to Moscow Golyanovsko-Izmaylovskaya mob, associated with out-favoured businessmen Mikhail and Lev Cherny and Oleg Deripaska.

On 28 July 2006, the new shareholders of VIT JSC planned to hold a meeting in order to amend the founding documents of the company, to approve the purchase of the shares of VIT by Electrozavod, and to change the registration body. On 20 April, VIT JSC new shareholders failed to give the right to keep the company’s register to Ukranian Privatbank. On 24 April, local prosecutors suspended the deal. Currently, Privatbank holds the shares, but only on paper.

Finans magazine ranked Leonid Makarevich 212th in the list of the richest Russians. His wealth was estimated 14.9 billion roubles, or roughly $ 0.5 billion.