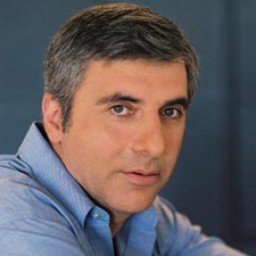 Professor of the International University.

1981 – graduated from Gubkin Moscow Institute of Petrochemical and Gas Industry (speciality of automatics and computer engineering).

After graduation he worked in the system of USSR Ministry of geology in the sector information support department (information gathering, storing and processing).

Graduated from Plekhanov Russian Academy of Economics on specialty of Management and Marketing.

Since 1988 - Deputy chief of the interindustry scientific and technical programs center.

1989 - 1991 – President of the Investment Commercial Bank of Scientific and Technical progress.

1991 - 1992 – MENATEP Bank Director of relations and at the same time the Chief of the MFO MENATEP Natural Resources Administration.

Since 1993 - first Deputy Chairman of OCFP MENATEP board of directors.

1993 – joined the Federal list of the electoral unit “Preobrazheniye”.

1996 – ranked among the 50 most authoritative interpreneurs of Russia.

Member of TEPKO bank Board of Directors;

From November 2001 till March 2003 he was the representative of Mordivia in Federation Council.

From June till November 2003 he took the position of the RGGU rector. In the end of summer of the same year after the beginning of “YUKOS” case left to Israel, in November got the Israel citizenship.

On 15-th of January 2004 he was annonced wanted internationally by the Russian Prosecutor General’s office on suspicion of financial fraud and tax evasions.

In July 2004 the Basmanny court of Moscow authorized his arrest. On the August 1, 2008 the Moscow City Court in absentia returned Nevzlin guilty in contract killings and attempted murders and sentenced to life-term imprisonment.

Nevzlin – the author of the books “Person with ruble” (written in co-authorship with Khodorkovsky) and "Public Relations – who needs this?".

Married for the third time, has three children.
Source: www.lenta.ru

The attention of the law machinery to the person of Nevzlin started from the so-called “YUKOS case” (about tax evasions and financial frauds). In July 2003 he was called out to the public prosecutor’s office to testify upon the case of one of the YUKOS co-owners Platon Lebedev, who was accused of grand theft by means of fraud, property damage and tax evasion. The matter of accusation was that through intermediary of a certain affiliate company of MFO “MENATEP” (which co-owner was Nevzlin) shares of Opened Company “Apatit” were stolen, the damage to the state was caused in consequence.
Source: "Gazeta" from 18.02.2004

In November 2003 Nevzlin became the rector of the Russian State Humanitarian University, which bewildered the scientific siciety, because Nevzlin had never done scientific work before and hadn’t had any academic degree. However already in summer Nevzlin took the educational leave to write dissertation and instead of giving himself up to new duties left to Israel. He applied for the Israel citizenship under the repatriation legislation. Nevzlin didn’t transmit the true reason of his actions but he talked that he wouldn’t experience the acts of anti-Semitism. In November of the same year Nevzlin got the Israel citizenship.
Source: "Gazeta" from 13.10.2003

And he got it in time because already in January 2004 the RF Prosecotor General’s Office announced Nevzlin to be internationally wanted on suspicion of econimic and tax crimes. Nevzlin was incriminated to “individual tax evasions in 1999-2000”. As the result of his financilal fraud the Russian government was caused a damage in the amount of twenty seven million rubles.
Source: “Vedomosti" from 16.01.2004

Afterwards the name of Nevzlin was basically mentioned in media in connection with the case of Aleksey Pichugin – the former security officer of YUKOS oil company. Pichugin was arrested in June 2003, after his arrest the “YUKOS case” was initiated. Pichugin was accused of organization of several contract crimes including murders. The investigation considered the possible worked-out scheme according to which Pichugin searched for the right people from criminal society for killing persons out of YUKOS favour by Nevzlin’s instructions.
Source: "Rossiyskiye vesti" from 17.09.2003

Pichugin was returned guilty in killings and attempted murders and Nevzlin was called the organizer and owner of those crimes.In July 2004 the Moscow Basmanniy court gave sanction to his arrest. Nevzlin was however in Israel that’s why on August 1, 2008 the Moscow City Court returned him guilty of contract killings, and attempted murders and sentenced him to a life-term imprisonment in absentia. In addition to that the court obliged Nevzlin to pay out 5,5 million rubles compensation to the victims and their families.
Source: www.lenta.ru

Nevzlin was brought in a verdict of guilty in the following crimes.

The organization of Limited liability partnership “Trade company “Phoenix” Director Valentina Korneeva. Korneeva owned the small “Tea” shop in Pokrovka street, which took Menatep’s fancy. The shop’s value amounted to approximately half a million dollars but Korneeva was offered for it only thirty thousand that’s why the woman refused. Hired killers Vladimir Shapiro and Mikhail Ovsyannikov shot a bullet in her head at the entrance of her own home in January 1998.

The contract murder of Nefteyugansk governor Vladimir Petukhov in summer 1998. In July 1998 Petukhov and his bodyguard were fired point –blank by contract killer Eugeny Reshetnikov and his fellow Gennady Cigelnik.
Source: "Izvestiya" from 18.05.2006

The YUKOS company intended to take Nefteyugansk under control, and to make it its own “capital”. Petukhov resisted it and was supported by the city residents. In response YUKOS began to delay payments to the city budget. Petukhov organized the mass meetings to go on hunger strike demanding to bring an action against YUKOS by fact of tax evasion. He also promised to gain the cancellation in Moscow of the decision to allocate the investment credit to YUKOS.
Source: "Rossiyskie vesti", 29.10.2003

The contract murder of the spouses Gorins. Sergey Gorin cooperated for a long time with Pichugin. In 1998 Pichugin offered Gorin to find people for beating the YUKOS employee Kolesov and Moscow governor’s adviser Olga Kostina. Pichugin was even the godfather of Gorin’s son Aleksey. Pichugin introduced Gorin to Mikhail Khodorkovsky and promised him career development. Gorin however didn’t wait for promises to be fulfilled and unsuccesfully tried to meet one more time Khodorkovsky. After that he met Khodorkovsky father who promised to help. At the same time Gorin laid down his demands to Pichugin – employment or 100 thousand dollars. Gorin got part of the amount. In the short run on November 20, 2002 Sergey Gorin and his wife Olga, who was in the know of her husband’s proceedings, were kidnaped from home. Children were locked in the bathroom. The bodies of Gorins were not found although the spots of blood and medulla were visualized at home.
Source: "Kompromat.Ru" from 20.02.2004

The murder attempt at the former Chief of Moscow government public relations department Olga Kostina . In November 1998 the explosion occured near the door of the apartment where the former “Menatep” PR employee Kostina was registered. Nobody suffered although several bridgings were damaged by the explosion wave.
Source: "Izvestiya" from 05.10.2004

The city hall official Kostina was suspected by YUKOS of endamagement to the company.
Source: "Vremya novostey" from 31.03.2005

The murder attempt at one of the managers of Austrian oil company East Petroleum Eugeny Rybin. Rybin’s car was exploded and shot from self-firer. By a lucky accident Rybin was not in the car because he remembered about his nephew’s birthday and decided to come over to his place. In the attempt on Rybin’s life his driver died. Rybin himself accused YUKOS in the attempted murder because he invested money in two oilfields owned by “Tomskneft” unit which was a part of East oil company. In 1997 YUKOS bought more than 60% of VNK shares and made “Tomskneft” cancell the agreement with Rybin’s company without returning his shares and money. Rybin filed a 100 million rubles claim.
Source: "Izvestiya" from 18.05.2006

On December 27, 2006 the Prosecutor General’s Office made a press release which announced Nevzlin to be one of the suspected of Hg poisoning of the former Federal Security Service member Aleksander Litvinenko. Nevzlin became suspected after the former Chief of “Menatep” bank Aleksey Golubovich, detained in Italy, declared that he was attempted to be poisoned by Hg. Golubovich informed that Nevzlin could be interested in the attempted murder because of the argue between YUKOS shareholders and top managers over the money control and property abroad.
Source: "Commersant" № 244(3575) from 28.12.2006

The Prosecutor General’s Office tried to gain Nevzlin’s extradition in connection with the life-term verdict sentenced by Russian court in absentia.
Source: www.lenta.ru

In 2006 the Israel journalists association member Juliy Nudelman brought an action against Ministry of internal affairs, Justice ministry of Israel and against Nevzlin to the Highest justice court. He asked the court to oblige Ministry of internal affairs to give explanation why Mr Nevzlin was not deprived of Israel state citizenship which he got in 2003. According to Nudelman the citizenship was given to Nevzlin with violation of the procedure.
Source: "Commersant" № 38(3855) 11.03.2008

The request of Nevzlin’s extradition was however juridically declined by Israel.

In June 2009 one more action was brought against Nevzlin with the demand to compensate the material and moral damage to the former YUKOS shareholder Vladislav Chernyshev. His shares, bought in 2001, burned as a result of company’s bankruptcy. In connection with that Russia also demanded Nevzlin’s extradition but didn’t get the consent.
Source: Izrus.co.il from 09.06.2009 10:57