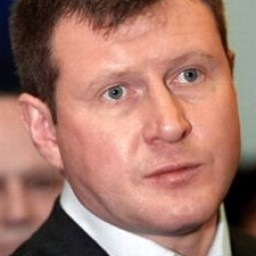 Education: Graduated from the Leningrad Institute of Physical Culture in 1989. He graduated from Finance Academy under the RF Government in 1997.

1995-1996 Deputy Director General of Interfin (the CEO is Alisher Usmanov). Founder of JSC "Financial Consulting and Management”. The representative of the Board of Directors of JSC “Oskol Electrometallurgical Combine ";

1997 Director General of the company "Lukoil-Garant". Member of the Board of Directors of “AGD Invest”;

1998 Member of the Board of Directors in OAO “Arkhangelskgeoldobycha” and OAO “Lebedinsky GOK”;

1999 General Director of Oskol Electrometallurgical Combine. Member of the Board of Directors of JSC "Arkhangelsk Diamonds";

2005 Member of the Board of Directors of OAO “Vnukovo Airport”;

2006 Owner of the banks "National Standard" and "Novoroscement”.

In September 2009, he was re-elected to the Board of Directors of OAO “Vnukovo Airport” (owns the terminal internal lines)

In 2000 Kvetnoy was involved in the conflict between the structures of Gazprom (Gazprominvestholding and Interfin), controlling the Lebedinsky GOK, and the Novolipetsk Metallurgical Complex (NLMC). Shareholders of LGOK did not introduce the representative of the NLMC supervisory council. At the same time shareholders reduced the number of members of the Supervisory Board, so that Chairman of the Board of Directors of NLMK, Vladimir Lisin could not carry his member into the supervisory board of GOK. Lev Kvetnoy entered it among others, while representative of NLMK, Andrey Leschikov did not.

This combination was performed in order to make NLMK waive the requirements to reduce tariffs on raw materials supplied to it. However, the Chairman of the Board of Directors of NLMK Vladimir Lisin did not to make concessions.

In 2005 Kvetnoy was elected to the Board of Directors of OAO "Airport Vnukovo". His candidature was proposed by a private shareholder of the company Vnukovo Vnukovo-Invest” to be an independent director. At the time Kvetnoy entered the board of directors, it largely consisted of government officials from Moscow.

In 2006, Lebedinsky GOK (LGOK) purchased shares of “Oskol Electrometallurgical Combine" (OEMC) - so the consolidation of assets began on the basis of mining and metallurgical holding that Alisher Usmanov created. At the time Alisher Usmanov owned a controlling stake of the company Gazmetall controlling LGOK and OEMC, other securities belonged to Kvetnoy and Andrey Scoch.

In the same year it became known that Alisher Usmanov, and Andrey Skoch had bought Kvetnoy’s shares in the LGOK and OEMC to merge the company with assets of Metalloinvest owned by Usmanov and Vladimir Anisimov into the largest iron-holding country.

The idea of its creation came from Usmanov after he had bought Mikhailovsky GOK. But Kvetnoy did not want to become his partner in the creation of the holding. He decided to sell his stake in the GOK and OEMC to the companies by Usmanov and Skoch .

Partnership of Kvetnoy with Usmanov and Skoch started in the 90’s when they began buying up shares of LGOK and OEMC. For a while all three had been partners in Gazprom.

In 2005, Kvetnoy were at odds with Usmanov because of the Magnitogorsk Steel Plant. In May 2005, Michael and Lebedinsky GOKs stopped deliveries of ore to the MSP.

This was due to the fact that there was no agreement on the price of supplies. Kvetnoy insisted on the resumption of supplies by LGOK, disagreeing with Usmanov.

After Kvetnoy had had his shares bought a subsidiary of OEMC - JSC "OEMC-Invest" he owned gained control over the bank "National Standard", it served accounts of the companies of the metallurgical holding Gazmetall. Kvetnoy received the bank in exchange for his shares Gazmetall.

Bank "National Standard" was captive and served enterprises of metallurgical industry. Kvetnoy announced plans to turn it into a universal bank, with a broad range of clients.

In 2007, due to growth in demand for cement Kvetnoy became interested in the cement business and acquired a controlling stake in OAO Novoroscement "- the second largest industrial enterprise in Russia. Earlier, Oleg Deripaska was interested in this plant, but did not agree on the price. The plant is close to Sochi, which almost guaranteed orders in the Olympics in 2014. However, Kvetnoy will have to compete with Inteko by Elena Baturina, whose cement assets are located nearby.

In 2007 the bank of Kvetnoy, National Standard began buying up regional banks. The first purchase was the Volgograd "Russian Southern Bank”.

Soon Kvetnoy announced his intention to buy the company "Gornozavodsktsement", in which the Basic Element of Oleg Deripaska had been interested also.

In 2009 Kvetnoy after two years became a member of the Board of Directors in Vnukovo again.

Previousely, upon having left the council, he retained an indirect connection with the airport: some accounts of OAO Vnukovo Airport and all accounts of "Vnukovo-Invest" had been served by owned by served the Bank "National Standard" of Lev Kvetnoy.

His return had to be at a difficult time for the shareholders. His arrival was associated with a desire to protect shareholders from the Moscow authorities’’ attempts to strengthen influence in the airport.

The Moscow government believed that Kvetnoy and Usmanov are the beneficiaries of offshore structures behind the private shareholders of Vnukovo. But they had been appealed for help only after Vasily Kichedzhi, a new member of the board of directors from the Government, wrote to Mayor Yuri Luzhkov on the need to make a check, assuming that they had been deriving assets from the airport.

According to some reports, Dmitry Baranovsky, one of the leaders of the Solntsevskaya OPG, nicknamed Dima Bely (“White”) had worked for Kvetnoy and Skoch .

There is information that Kvetnoy has intimate relations with the daughter of ex-chairman of the MAPO-Bank, Ananyev.