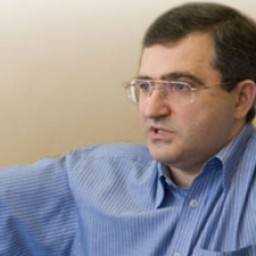 Lev Khasis was born on 5 June 1966 in Kuibyshev (now Samara). In 1988, Khasis graduated from Kuibyshev Aviation Institute, where he worked as a head of foreign economic ties department until 1990.

During 1997-1999, Khasis held various senior positions in the companies of aircraft and aluminum industry.

Since 2000, Khasis has switched to retail. He was a member of the board of TsUM Trading House.

He is married for the second time. His first wife, lawyer Natalya Barshchevskaya, gave birth to two children.

In 2009, in a move to counteract increased shoplifting Lev Khasis proposed his way to stop criminals: first, punishments for shoplifters should be made tougher, and second, the retailers should be allowed to include possible risks of theft in the price of the goods, that is to make up the losses out the customers’ pocket. The government did not agree in view of the fact that retail prices continued to grow rapidly, despite concessions to the retailers.

Source: ru-read.ru / review of the articles

Lev Khasis lobbied the State Duma for a new trade law. The State Duma was to consider the bill in July 2009. The bill put limits on deferment of payments of retailers to the suppliers for the sold goods, banned bonuses (entry fee) paid by suppliers for accessing shelves in the chains and barred those retailers, whose presence in a regional market was less than 25%, from buying additional trading spaces. The retailers were clearly against the legislation. For months Lev Khasis assured members of the Association of the Retailers of Russia that the situation was under his control and that the interests of retailers would not be infringed upon.

Khasis made them to believe that he was on good terms with the officials in the Ministry of Industry and Trade, which drafted the bill. The association paid large sums to help Khasis to maintain these relationships. He was said to spend over $5 million on lobbying and never gave a report. Moreover, Khasis officially proposed to spend additional 12 million roubles ($400,000) on PR campaign to discredit the bill. He planned to use the hire the same PR-agencies that, judging from the result of their work, ruined things with lobbying retailers’ interests.

In 2009, Lev Khasis got married for the second time. His spouse was a young lady, seen in the company of the billionaire several times before. For a 5-weeks-long honeymoon Khasis hired an ocean yacht and a whole island in the Caribbean. According to sources, he spent over $700,000 on the voyage.

Because of the holiday, Khasis halted his lobbying activities, which many saw as a sign of him losing the interest in the future of the bill. Moreover, he refused to come to the government meeting with Vladimir Putin, where the insiders discussed the bill. The formal meeting on the trade was broken off, when Putin took the participants in the nearby Perekrestok outlet of X5 chain. Putin found the price was marked up in the outlet. After Putin’s inspection, Perekrestok price policy and income structure fell under scrutiny. CEO of X5 was expected to quit.

In spring 2011, it emerged that Lev Khasis refused to continue serving as X5 Retail Group CEO. X5 said that it had entered into a new phase of development and looked for a new strategy. But since nothing had changed in the group’s strategy, the thing was not in the strategy. Khasis leaked that there might have been a conflict between him and one of X5 members, Fridman’s Alfa. Fridman did not want to have the obstinate CEO in the company and the sides peacefully parted. Khasis based himself in the USA, where in September 2011 Wallmart hired him as vice-president picked him.