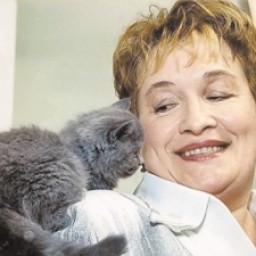 Lubov Sliska was born on 15 October 1953 in Saratov  into  a single-mother family. In 1971 he joined a bookselling college in Saratov. In 1990 she graduated from Saratov Law  School  as a jurist
In 1972-1976 she worked as a secretary  at Rospechat printing company.
In 1977-1985 she was a personnel officer at Rospechat.
In 1985-1987 she was a personnel director of Rospechat.
In 1987-1992 Sliska was a chairman of the trade union committee of  Rospechat.
In 1992-96 she was a chairman of Saratov Regional Committee of the Union of heavy engineering workers.
In autumn 1996 Sliska was a deputy of  Dmitry Ayatskov, the governor of the Saratov region.
In 1996-1998 she was a permanent representative of the governor to Saratov Regional  Duma.
In 1998-1999 she was a vice-speaker of Saratov  regional government.
In 1999 she was elected  State Duma deputy from Medved political group. She has been a deputy untill recently.
Since 2000 she has been the first deputy chairman of the State Duma.

Awards:
Order of  Merit for the Fatherland  4th Grade (2008)
Honorary title of Honored Lawyer of the Russian Federation (2005)
Order of Honour (2002)
Sliska has been married twice. She has no children. Her husband  Sergei Germanovich Sliska is a judge of the Moscow Regional Court.
In  2010 Sliska did not produced her income declaration.
Source: Wikipedia

Dossier:
Personal relationships between governor of the Saratov Region Dmitry Ayatskov and Lyubov Sliska started in 1996 when she excelled  in working for his gubernatorial campaign. Ayatskov liked Sliska's  energy and pertinacity that were expressed in her speeches. She said then: " I will fight for Ayatskov. Probably with my feet. " They were rumoured  to have an affair. However, when Ayatskov did not help Sliska's brother to be elected to the Duma, Sliska changed her attitude to Ayatskov.

State Duma Deputy Vasily Shandybin, notorious for his unethical conduct,  later remembered about Sliska's strong ties with Ayatskov. ''You've slept with Ayatskov, that's why you're a vice-speaker now", he said during debates in the State Duma. Sliska, who grew up in a working-class district, was not embarrassed. "I have a right to sleep with people I like", she responded.

But since they fell out,  Ayatskov   strictly instructed his ministers not to deal with Sliska during the election campaign of 2003. Sliska had to be nominated as a deputy of another region of Russia.

During the deputy campaign of 1999 in the the Saratov region Sliska's brother Sergei Timoshin was a member of the Regional Election Committee. Moreover, he got full voting status, what was a direct violation of the law. At the request of the Communist Party, Ayatskov  issued an order on suspending Timoshin's authority. However, Timoshin was not removed from his position and, according to deputies from the Communist Party,  that  resulted in Sliska's election as a deputy. Since she was nominated by Medved (Bear) political group, she was dubbed the Great Bear.

When Sliska became an active member of  Unity party and purchased a luxury car that was unwonted for  Saratov, she was called Sliska the Mercedes.

The Great Bear was suspected of  misusing  party funds. Having adapted to work in Moscow, she often criticized her colleagues for being corrupted. However, while criticizing Duma deputies for taking  trips at the public expense, she forgot that her trips to the Vatican, Canada and to the U.S had been also covered with the state funds. Sliska demanded to include 50-million costs on construction of a bathhouse  in Krasnoarmeisk city of the Saratov region in the federal budget.   That  was the boldest  lobbying of that time.

After her first shopping in Moscow  Sliska  apparently  forgot that her deputy salary was about 10 thousand rubles and said publicly: "Oh, here in Moscow the prices are so low! I got such a good coat just for 20 thousand! ". In Moscow Sliska also liked going to Marriott  first-class restaurant.

Some deputies told about scenes   Sliska made when offered  Volga instead of a foreign car as a service vehicle. Officials then had to let her have a foreign car.

Duma deputies of the third convocation could not stopped  Sliska from abusing her office. Speaker of the State Duma Gennadi Seleznev was overwhelmed with phone calls. People asked Seleznev to terminate somehow dashing  business activity of his deputy. As far back as 2004 Sliska  herself said: "I am ready to set a tin box at  my door with the inscription " for the needs of Russia. "  If there is someone in the world who does not need money,  one can bring it there"

She also added : "Compared to Abramovich, I'm just a beggar." However, when her apartment was robbed, 90 precious objects were listed stolen, including promissory notes for 4 million rubles and golden and gem jewellery of famous jewellery houses.

In summer  2006, after prosecutor general Vladimir Ustinov had been unexpectedly dismissed from his position, Sliska was reported to be Ustinov's potential successor as her candidacy "was being discussed." However, instead of Sliska, former Minister of Justice Yuri Chaika was appointed prosecutor general of Russian Federation.

In 2006  Sliska admitted that she owned  19% stake in Transmash-Grupp public company and another 19% stake in Transmash company in the total value of $60 million. Sliska  explained that company staff had asked her to accept the share packages as the companies had been afraid of corporate raiders. Sliska  considered the offer for two years and then agreed. "I would not have paid for the shares, I have never in my life had such an amount", she said. She immediately provided her securities with entrusted administration and, allegedly, had "never been interested" in dividends.

The scandal was extremely advantageous for Ayatskov, as he was glad to instruct local deputies to make a detailed report on Sliska's abuse and fraud.

In July 2011 Sliska announced that she would no longer stand for the State Duma. Reports say that her decision was caused by her conflict with  deputy prime-minister and head of government personnel Vyacheslav Volodin. Besides, at the end of the month  Sliska criticized the decision of Velsky district court of the Arkhangelsk region, that denied parole to former head of Menatep international financial organization Platon Lebedev. According to some observers, it was ''inconceivable demarche," whereas  Sliska's career "has always been absolutely opposed to any demarches."
Source: Kommersant-FM, 29 July 2011

On 11 September 2011 Lubov Sliska strongly advocated Khodorkovsky's parole. It can be attributed to her intention to quit the State Duma in style.