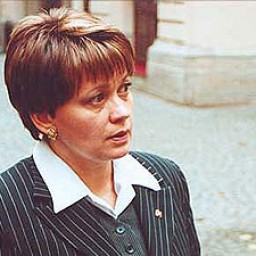 Sovershaeva Lyubov Pavlovna was born on August 17, 1956 in Leningrad.

In 1977 she graduated from the Leningrad Institute of Soviet Trade named after F.Engels, degree in economics.

From 1977 to 1991 she worked as an economist, chairman of the trade union committee, the secretary of Party committee of the catering Association of the Smolninsky district of Leningrad. From 1989 to 1991 - the private owner of a cafe in St.Petersburg.

From 1991 to 1996 - Head of Department, Head of Division, Department Director of the Committee on City Property Management of St. Petersburg.

From June 1998 - Member of the Board of Directors of OAO "Petersburg - the 5th channel”.

Since August 2000, Lyubov Sovershaeva became deputy plenipotentiary presidential representative in the North-West Federal District, where she was responsible for the financial and socio-economic unit, retaining the post under the three envoys: Viktor Cherkesov, Valentina Matvienko and Ilya Klebanov. Lyubov Sovershaeva iswell acquainted with Russian Prime Minister Vladimir Putin – due to their work in the Smolny. It is said that he took care of her moving up the career ladder.

May 13, 2004, as part of reforming the structure of the plenipotentiary representative in the district, the number of authorized deputies of plenipotentiary envoy has been reduced from nine to two. Sovershaeva retained her post.

Since January 2005 - Member of the Board of Directors of OJSC "Territorial generating company № 1", created on the basis of certain assets of subsidiaries of RAO “UES of Russia".

1 September 2006 she was appointed Chairman of the Board of Directors Abros, a subsidiary investment company of the bank "Rossia".

On December 18, 2006 shareholders of OOO Media-Holding REN TV (this structure involves the like-named TV channel and broadcaster) approved the new Board of Directors, chaired by Lyubov Sovershaeva. In February 2007, she headed the board of directors of another federal channel - JSC "TRK Petersburg" ("The 5th Channel ").

Lyubov Sovershaeva - Member of the Board of Directors of OAO Ust-Luga. Honored Economist of the RF (2005).

She takes great interest in travelling.

First time Lyubov Sovershaeva was involved in the conflict story in the mid-90's, when the press rumored that Lyubov Sovershaeva could be involved in a forgery for a reputable businessman Ilya Traber. The story of the conflict was as follows: in 1993 the Russian government issued an order, under which 29% of shares in the Seaport of St. Petersburg were to become voting and gain a foothold in state ownership. If this order was realized the state would own 49% of the port (another 20% belonged to the state initially). On July 1, 1993 the then chairman of the city committee for the administration of state property (CASP), Sergey Belyaev adopted the changes corresponding to a given order in the privatization plan "Seaport", but the documents filed by employees of the CASP to Estate Fund contained two arithmetic errors, on this reason the process of strengthening the state's influence in St. Petersburg port was stalled, and then stopped altogether. The mistake was made by Lyubov Sovershaeva; in those years she worked in CASP of Petersburg, and her then-colleague, now president of the All-Russia Association of Privatized and private enterprises - Grigory Tomchin.

At the time Head of Department for Supervision over the implementation of laws and legality of legal acts of the Prosecutor's Office of Petersburg - Nikolay Fatnev - suggested that that Sovershaeva and Tomchin had made the mistakes on reason - the state was extruded from the port intentionally, but that has not been proved. At the time the head of the St. Petersburg CASP Vice-Governor Mikhail Manevich made an attempt to correct the situation, but he was assassinated in 1997. Later, outside organizations were actively buying up shares of the Seaport from its staff, and by early 1998, the vast majority of the voting shares was owned by two foreign companies, one of which - Nasdor Incorporated, registered in Liechtenstein - belonged to an authoritative businessman Ilya Traber. And in 1999, Traber was in fact the sole master of the Seaport.
Source: www.rospres.com of 11.07.2002, "Tayny Sovetnik» № 9 of 2000

In 2005 the media reported that the presidential envoy in the Northwestern Federal District Ilya Klebanov, is leaving his post. An interested group of persons took interest in this position, among them the then Deputy of Ilya Klebanov, Sovershaeva Lyubov was together with her colleagues - the assistant ambassador to the Northwestern Federal District - Mikhail Motsakov, and Deputy Klebanov - Alexander Nesterov. In the struggle for the post Sovershaeva was opposed by the former president of North Ossetia, Alexander Dzasokhov and Senator from the Vladimir region, Vadim Gustov.
Source: “Kommersant-SPb” № 223 / P (3307) on 28.11.2005

In 2006, Lyubov Sovershaeva was named among the officials, creating a talent pool in the bank "Rossia" for the then president Vladimir Putin and his successor, Dmitry Medvedev. At the end of August 2006, Sovershaeva voluntarily resigned from her post as deputy presidential representative in the Northwestern Federal District and was appointed head of the board of directors of OOO “Investment Company Abros- a subsidiary of the St. Petersburg Bank «Rossia» Based on the past career of Lyubov Sovershaeva, many were calling the new appointment to the post of a private banker as a "career suicide", given that the previous position of Sovershaeva concentrated an enormous number of contacts in the administrative, political and economic elite of the country, administrative, financial and lobbying capabilities. At the same time, this appointment was due to the fact that Vladimir Putin, after leavimng the presidency, would need his own team, which was formed in the bank "Rossia”. Sovershaeva was said to be not the first Russian official from the team of Vladimir Putin, coming to “Rossia”: in different years, the head of the Ministry of Education Fursenko, RR President Vladimir Yakunin, the deputy head of MERT, Vitaly Saveliev used to work in the bank.

Presumably, the movement of Sovershaeva to the bank was a temporary phenomenon, and soon her experience and opportunities were going to be needed somewhere else.
Source: "Century" from 14.09.06, www.polit.ru from 07.09.2006

In 2006, Lyubov Sovershaeva mentioned in the media in connection with the conflict story of the power change of ownership in the channel REN-TV - then, on the eve of presidential elections, the private Federal Channel was put under the control of pro-Kremlin structures. Immediately after Lyubov Sovershaeva was appointed to the post of Chairman of the Board of Directors of the Investment Company Abros, the share of the company in the Media-Holding REN TV has grown to over 50 percent. Prior to this transaction, 35% stake in REN-TV was owned by Severstal and Surgutneftegaz, and 30% of the shares were in the German media company RTL Group. Department of German publishing group Bertelsmann, which owned shares in REN-TV, then stated that after the expansion of "Abros" it was going to sell its stake in the broadcaster, and later it was forced to do so. And in December, "Abros” acquired the share of "Surgutneftegaz "and" Severstal-groups "in" Media-Holding REN TV and December 18, 2006 the shareholders of the holding approved the new Board of Directors, chaired by Lyubov Sovershaeva.
Source: "Gazeta" from 13.04.07, “Kommersant” № 237 (3568) on 19.12.2006

In 2010, the pages of the media reported on conflict between the leader of the Regional Charitable Fund "Pokrovsky”, which President was Lyubov Sovershaeva - and entrepreneur Vardges Kazaryan. The essence of the conflict was as follows: Pokrovsky fund used the money of philanthropists to work on recreating the complex of landscape art "Zinoviev Ensemble estate” in Nevsky Forest Park, Vsevolozhsk district of the Leningrad region and to develop an ethnographic park of Russian wooden architecture in the protected area. To follow up the project, "Pokrovsky" obtaied 600 hectares of land on the banks of the Neva River – an entire Nevsky park for free use in an odd way. Then Sovershaeva was actively assisted by the then head of the Leningrad regional territorial management Rosimushchestvo, Mikhail Blinov. At the time, the entrepreneur Vardges Kazarian built cafe in the estate. Members of the Fund, including Lyubov Sovershaeva, initiated legal action in court to admit the structure illegal and in early 2010, the Arbitration Court decided to demolish the cafe.

Immediately after the court decision had taken legal effect, on the Internet sites an article entitled "Pseudo-church traditions” was published, in which the author questioned the legitimacy of the Fund, saying members of the Fund forged the documents in order to gain control of Nevsky forest park and the prosecution of its general director, Andrey Antonov. After the publication of the article Lyubov Sovershaeva stated that the leadership of the Pokrovsky Fund decided to go to court to protect the honor and dignity of the organization.
Source: www.fontanka.ru on 02/04/2010