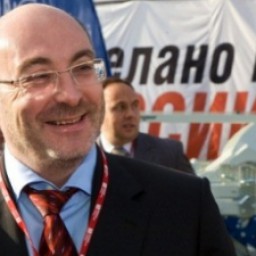 He was born on May 23, 1961. In 1984, he graduated from D. Mendeleyev University of Chemical Technology of Russia/ majoring in Chemical technology of Rare and Scattered elements. Ph.D. in Chemistry.

In 1988-1990, he worked as a junior researcher of the department of rare elements of MchTI (Moscow Chemical Technology Institute).

From 1996, at various times he headed boards of directors of several large machine-building enterprises of the Russian Federation, combining his activity with the post of President of Non-Commercial Partnership Concern Tractor Plants.

From 2006, he was President of the Concern Tractor Plants, from 2007 - General Director.

From 2008, he headed the Committee on tractor, agricultural, logging, municipal, road-building, and transport mechanical engineering at the Bureau of the CA of the Union of machine builders of Russia. Honorary machine builder of Russia.

Mikhail Bolotin became the tractor oligarch by agreement with the Kremlin and Staraya Square (literally Old Square). By that time he had already had assets in Cheboksary Industrial Tractor Plant Promtractor and other machine-building enterprises. After a short bargaining the parties quickly came to an agreement. Shortly such giants as Lipetsk Tractor Plant JSC, Vladimir tractor Plant JSC, a leading developer of tractor machines and constructions of FSUE NATI, and some more Russian and Belarusian enterprises became parts of the new empire. The last acquisition of the KGB & tractor serviceman was Cheboksary Aggregate Plant producing components and constructions for Russian and foreign customers. There is no need to say that in addition to Russian buyers, the new tractor empire immediately formed echelons of exports directed to the regions influenced by security and intelligence structures - from Iraq to Cuba.

In 2012, the Moscow district court of Cheboksary considered the petition of the Investigative Directorate of the Investigative Committee of Russia in Chuvashia about arrest of the Deputy General Director of Uralvagonzavod Semen Mlodik. As Chairman of the Board of Directors of Promtractor-Wagon CJSC (the enterprise is included in Concern Tractor Plants), in the spring of 2006, pursuing the aim to become a co-owner of the successful company and to receive dividends, Mlodik organized additional issue of shares and thus received 26 per cent stake worth 273 million rubles at his disposal. The preliminary investigation revealed that through some firms being under his control, in particular through RZHDS-Region LLC and Promservisvagon LLC, Semen Mlodik acquired an additional package of shares, washed away by the additional issue, which he then transferred to one of his offshore companies.

For a long time Semen Mlodik was a partner of the President of CTP (Concern Tractor Plants) Mikhail Bolotin. In 2006, he even headed the company operating all assets of the group. But a year later there was a conflict between them, and Mikhail Bolotin, who was the main owner of the CTP at that time, dismissed his partner from the post of the General Director, and at the beginning of 2008, he dismissed him from the group. But it was assumed that Mlodik was a minority shareholder of CTP, however Bolotin assured that his partner was not a shareholder but only a hired manager.

In 2009, structures of Bolotin owned 30 cinemas, including, multiplexes XL (Moscow) and Peak (Saint-Petersburg). Bolotin said that he planned to create a network of 200-250 cinemas, which would take 10-15% share of Russian cinema market.

Bolotin also has personal investments in film production: in 2007, he together with the Vice-President of CTP Albert Bakov and actor Mikhail Porechenkov created a film company GDP Alliance; its first picture was the film D-Day (Michael Bolotin personally invested in it about $5 million).

It seemed by all signs that CTP was going to cease its existence in the summer of 2010. But a miracle happened - banks and creditors agreed to restructure bad debts of CTP. And then even Vnesheconombank entered into the transaction.

The miracle had its explanation. Albert Bakov, a junior partner of Mikhail Bolotin, married to the daughter of Nikita Mikhalkov Anna, had asked his famous father-in-law-a filmmaker to talk with the Prime Minister of the Russian Federation Vladimir Putin. And the CTP’s debt in one and a half hundreds of millions of dollars was suddenly forgiven.

In the spring of 2011, CTP was to “go” under control as a result of a competition for a new management company, which Vnesheconombank planned to carry out. But Mikhalkov again appealed to Prime Minister Putin. And Mikhail Bolotin got another chance for a year; he promised to carry out IPO and repay the debt to banks.

In 2012, film director Nikita Mikhalkov, his son-in-law - the first vice-president of the Concern Tractor Plants (CTP), Albert Bakov and the President of CTP Mikhail Bolotin became co-owners of Kusinsk diamond manufacturer ChelProm-Diamond LLC (UralDiamond). Mikhalkov owns 10% of shares of the plant, Bolotin and Bakov both have 20% each. The remaining 50% is controlled by the company's Director General Alexander Sintyaev.

In 2012, Dorogomilovsky court of Moscow dismissed the claim of VEB to the president and former owner of the CTP Mikhail Bolotin to collect from him $155 million according to a contract of guarantee to the bank. It was about non-execution of the contract of the bank guarantee of 2010. Bolotin became the VEB guarantor for AgromashHolding B.V. (controlled by Machinery & Industrial Group) for loans for purchasing of Dunham-Bush. The lawsuit was filed in May. The lawsuit was stopped because VEB then refused its claim. Mikhail Bolotin explained that he paid off the bank. VEB confirmed this information.