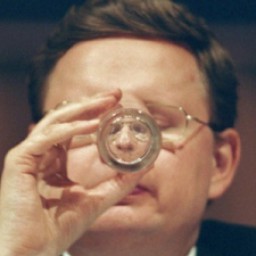 Mikhail Delyagin (born 18 March 1968, Moscow) graduated with honours in economics from Lomonosov MSU. Before going to university, he did compulsory military service to the Soviet Army (1986-1988).

In 1990-1993 he was an analyst in Boris Yeltsin’s pool of experts. He quited the group by his own decision. He chaired analysis center of Kominvest Group.

His articles and appearances on TV and radio were considered “anti-government propaganda”. He was sacked on 17 August 1998, a day before the default.

August 1999 advisor to Evgeny Primakov, chairman of the Coordination Council of the politic bloc Fatherland-All Russia

In 1998 he established and chaired Institute for Globalization Problems (IProG). In March 2002 he became the president of the institute and its chief researcher, in April 2006 – the director of the institute.  Chairman of the council for ideology of Rodina political party (2004-2006), member of the presidium of the Congress of Russian Communities, member of the political council of the Other Russia (2006-2007). In March 2010 he founded and chaired organisation committee for forming political party called Rodina: Common Sense.   Active state councilor of the 2nd Class

President Yeltsin awarded him with personal commendation (decree no.70-rp signed 11 March 1997).For the long time he has been the youngest doctor of science of economics, the highest academic degree in Russia (1998).

He was awarded V.V.Leontyev medal for “achievements in economics” (2011). Member of the Council for Foreign and Defence policy think-tank (1999), administration board of the All-Russia Union of the Producers of Consumer Goods, supervisory board of the Global Anti-crime and Anti-terrorist Forum (2001), presidium of the National Investment Council (2005). Deputy chairman of Russian Union of Taxpayers (2003). Delyagin has got over 1000 publications in Russia, the USA, Germany, France, Finland, China and India. He authored 13 monographs, including well-known titles such as «Economy of nonpayments» (1997), «Ideology of the National Revival» (2000), «World Crisis. General Theory of Globalization» (2003), «Russia after Putin. Is orange-green revolution unavoidable?» (2005), «Drive of Humankind» (2008), «Crisis of Humankind. Will Russia Survive in Non-Russian Mutiny?» (2010), «New Oprichnina. No Need to Flee from Russia Right Now. Why?» (2011). Editor of the book «Practices of Globalization: Games and Rules of the New Epoch» (2000). He coauthored, together with Vyacheslav Sheyanov, a book called «The World Inside Out. What Will the Crises Bring to Russia?» (2009), «Russian Space: Victories and Defeats» (2011). He was the editor of Russian translation of Paul Krugman's book «The Return of the Great Depression» (2009), editor of a textbook on Russian culture called «I am Russian» (2010).

Source: The Russian Mafia own information

In August 1998 Delyagin founded Institute for Globalization Problems and became its director. The media poked fun at Delyagin. According to the journalists, the institute consisted of one Delyagin, one table and one chair. He was nicknamed a «one-man research center».

In April 2004 Delyagin joined Dmitry Rogozin's Rodina political party. But he did not stay long. In July 2006 he was expelled. A spokesman of Rodina cited «actions infringing damage on the party's reputation and attempt to dishonour the party» as reasons of Delyagin's expulsion. Delyagin claimed that it was his participation in the conference of the Other Russia coalition that prompted his displacement. He told journalists at the press-conference on 13 June, that Rodina's leadership followed the orders from the presidential office and banned members of the party from taking part in the conference. He urged fellow partymen to gather extraodinary conference and banish Aleksandr Babakov (a party leader)  and his supporters.

Delyagin was elected to the presidium of Rodina - the Congress of Russian Communities organisation at its conference. The organisation was a regenerated version of the Congress of Russian Communities. Delyagin made a number of statements which gave cause for the newspapers to say that he had turned to the radical nationalist out of the liberal economist.

In September 2010 Delyagin was reported to become the atchitect of a new political entity - the party called Rodina: Common Sense. Delyagin said that the founders of the new political force saw it as a regenerated variant of Rodina party and planned to retain its name. Delyagin also said that the party would not cooperate with the Duma opposition and the Dissenters' march.

Early in May 2011 Vladimir Putin founded All-Russia People's Front movement which will be the basis for the coalition for the Duma elections in December. The opposition responded by founding their own coalition - the Committee of National Salvation. The coalition was formed on 22 May. It unites Rodina: Common Sense, Eduard Limonov's the Other Russia, ROT Front, Sergei Udaltsov and Konstantin Kosyakin's Left Front. The aim of the coalition is «counteracting «rubber stamp elections» in December 2011.