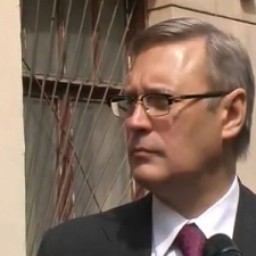 Mikhail Kasyanov was born on December 8, 1957, in Solntsevo village in the Moscow Region.

1978-1981 senior technician, engineer at the Research and Design Institute for Industrial Transport within the USSR Gosstroy (building committee)

1981 Mikhail Kasyanov, 23, graduated from the MADI with the diploma in Construction Engineering

1981 The administration of the Gosplan (State planning committee) takes on Kasyanov.

1987 He graduated from the Gosplan’s High Economics School

1993-1995 head of the department for foreign loans and external debt, member of the collegium of the Ministry of Finance of the Russian Federation

On May 25, 1999 he was appointed the finance minister in Sergey Stepashin’s cabinet. In June he became member of the Security Council of Russia

On January 10, 2000 he was appointed the deputy prime-minister of the Russian Federation

On May 7, 2000 he became acting prime-minister of the Russian Federation and the finance minister

In 2006 he headed the People’s Democratic Union movement.

He met his wife Irina in school, she was a year older than Kasyanov. They have two daughters - Natalya (1986) and Aleksandra (2005).

In 2006 Kasyanov married his daughter Natalya. The nuptials cost $400,000. Natalya Kasyanova united in matrimony with Andrey Klinovsky, a 22 years old graduate of prestigeous Moscow State Institute of Foreign Relations (MGIMO) and the heir of a grate estate empire. Andrey Klinovsky, Kasyanov's son-in-law, is a younger child of famous (among business groups) Timofey (or Timur) Klinovsky, the director general of Shelter Corp and co-founder of the number of firms (StroyLandInvest, Tetra T, Land-Service, Gorki-2 agriculture complex, Narskiye Islands fishery). Kalinovsky's core business is land. He is the largest land-owner in the Odintsovsky District of the Moscow Region, the most expensive corner of Russia.

On July 20, 1998 the International Monetary Fund decided to grant Russia a $11b loan to stabilize economy. The loan was doled out in 3 tranches. The first tranche (which turned out to be the last) was $4.8b. During the period from 22 to 28 July the tranche was domiciled in the Federal Reserve Bank. On August 16, Boris Yeltsin ordered the Central Bank of Russia to use the whole amount of money to “strengthen monetary reserve”. But it did not happen. The said $4.8b were lost in Switzerland. Geneva's investigative magistrate Laurent Kasper-Ansermet established two facts: the money were not wired to Moscow, all transfers were carried out by the orders of Mikhail Kasyanov, the head of Russian delegation at the negotiations with the IMF.

At the end of the 90s, Kasyanov abused his official position and played the stock market to speculate in shares. The mastermind behind the corruption scheme was Aleksandr Mamut. By spreading «classified» information, Kasyanov triggered the share price fall. MDM-bank and Sobibank, affiliated with Kasyanov, Mamut and Roman Abramovich, bought the shares at knockdown prices. Later Kasyanov, the minister of finance, made a statement («the situation is resolved») or ordered to use Russia's state funds to pay off the debt instruments. The shares immediately rose in prise. The profit was funneled via the Bank of NY.

This money was a part of estimated $15b, which was at the center of a major “Russiangate” money laundering scandal. According to the reports, top officers of the Bank of New York funneled the dollars of Russian mafia, including $10b from the loan granted by the IMF.

Since 1999 the media have linked Kasyanov with Mabatex company, the Swiss firm which was a supplier for the Kremlin restoration works - the project managed by Pavel Borodin, the head of Presidential Property Management department. Kasyonov, as the finance minister, have been rumoured to «oversee» all currency transfers by Mabatex.

In January 2001, Borodin was arrested in the USA by request of Swiss prosecution. Later he was released on 5m SFr. bail. In March 2002 the criminal proceedings against Borodin were dropped: he paid fines and that was it. Borodin said he was not going to appeal.

Since 2003 Kasyanov has become an outspoken advocate of head of Yukos Mikhail Khodorkovsky and CEO of Menatep Platon Lebedev. He made a number of statements, saying that criminal prosecution of the businessmen undermines the investors’ confidence in Russia. The media gave extensive coverage to his statements, speculating that the relationships between Kasyanov and state security agencies (the interior ministry and the Prosecutor General's office) grew tense.

In 2005 the State Duma deputy Aleksandr Khinshtein accused Kasyanov of unfair purchase of state dachas called Sosnovka-1 and Sosnovka-3. In the appeal submitted to the Prosecutor General Khinshtein claimed that Kasyanov signed an order to transfer the dachas to the state-run company called VPK-Invest. The company put up the property for auction. The companies that won the auction sold Sosnovka-1 to Kasyanov and Sosnovka-3 to Mikhail Fridman, the head of Alfa Group. Khinshtein claimed that the winners of auction paid knockdown prices for expensive dachas and were affiliated with each other and Kasyanov. The former prime-minister and his wife, Khinshtein writes, are the co-founders of Art-group firm that bid for the dachas.

At the beginning of July 2005 the Prosecutor General’s office opened a criminal investigation into what might fall under Article 165 of the Criminal Code of Russian Federation, “infringing large-scale damages by means of deceit and abuse of confidence”. Kasyanov was questioned by investigators. In 2006 Moscow’s Arbitration court overturned the results of Sosnovka-1 auction, but did not uphold the appeal by Rosimushestvo (State Property Maintenance Agency) to retrieve the dacha. The court ruled to clear Kasyanov of allegations and to consider him a fair buyer (unlike Mikhail Fridman who was ordered to give the dacha back). On January 29, 2007 Moscow’s Khoroshevsky Court also overturned an appeal by Rosimushestvo to recover 46.5m roubles from Kasyanov.

In May 2010 Kasyanov gave evidence as a former prime-minister in favour of Khodorkovsky and Lebedev at their trial. He said that Khodorkovsky and Lebedev could not embezzle 350m tons of oil on grounds that  Yukos could only extract such an amount of oil, but not embezzle. Kasyanov confirmed the fact that the company had been among largest tax-payers in the country. He said the trial was “political” and that Khodorkovsky was put on trial because he “dared to provide opposition with financial support without the Kremlin’s consent”.