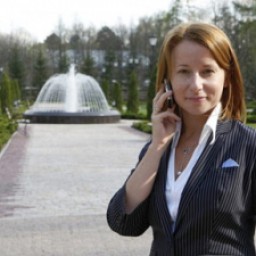 In 1998 she graduated from the Philosophy Faculty of Moscow State University.

In 1995-1997 she worked as a correspondent in the politics department of Moskovsky Komsomolets newspaper.

In 1996 she provided press coverage for the presidential campaign of Boris Yeltsin.

In 1997-1999 she worked as a correspondent in the politics department with Kommersant publishing house.

From March to October 1999 she was a political columnist for Interfax news agency.

Since October 1999 she has been Acting Press Secretary to Vladimir Putin and at the same time filled the position of Deputy Director of the Department of Government Information.

On November 11, 1999, after Mikhail Kozhukhov was appointed press secretary to Russian Prime Minister, she retained the post of Deputy Director of the Department of Government Information.

Since 2000 she has been member of the Russian Presidential Administration.

In 2000-2002 she was Deputy Head of Press Service of the Presidential of the Russian Federation.

In 2002-2004 she was first deputy to the press secretary of the Russian Federation President and Head of the Presidential Press Service.

In 2004-2008 she was Head of Press Service and Information Directorate of the President of the Russian Federation.

She is married to Alexander Budberg.

In 2010, according to the tax return, Timakova’s income amounted to 3.8 million rubles. She owns an apartment of 60 square metres. Her husband, journalist Alexander Budberg, earned 25.8 million rubles. Budberg owns three apartments. In 2010 he bought a parking spot and a limousine Mersedes Benz S 350 L.

In October 1999 Timakova was appointed deputy to Andrey Korotkov, Head of the Department of Government Information with the Presidential Executive Office, becoming at the same time press secretary to Prime Minister Vladimir Putin. Timakova’s connections within Kremlin played a significant role in her appointment. According to some reports, Putin hesitated for a long time whether he should make this young woman his press secretary, but he was persuaded that "a woman will be able to soften his image that is too tough."

In 2007 the media reported that Timakova, as well as Igor Shuvalov, Assistant to the President for Economic Affairs, and Arkady Dvorkovich, Chief of the Expert Department, are among the most close people to first deputy prime minister Medvedev. For two years Timakova supervised the so-called successor project in the Kremlin in relation to Medvedev.

In 2009 Dmitry Medvedev approved the new member list of the Presidential Council for Human Rights headed by Ella Pamfilova. Among those on the list formed by Timakova there were those who criticized leadership of the country. The council included Irina Yasina, head of the regional journalists Club; Dmitry Oreshkin, political analyst (who called Putin “Hitler’s successor and follower of his ideas”, comments Russian mafia) and former head of Open Russia founded by Yukos oil company; journalist Svetlana Sorokina, Lev Ambinder (Foundation Help), Kirill Kabanov (National Anti-Corruption Committee), and Elena Panfilova (Transparency International - Russia).

Voloshin recommend Timakova to Medvedev and she kept the position. She began to play a bigger role than just that of a press secretary. In some way she is an informal head of the ideology department. And Timakova is almost the only confidant of Medvedev in the president's entourage. For instance, she formed the new Council on Civil Society. Timakova is the architect of modernization. Her team is the Institute for Contemporary Studies (INSOR). Medvedev is the chairman of the board of trustees; chairman of the managing committee is Igor Jurgens; and Alexander Budberg, husband of Timakova, is member of the managing committee

In summer 2010 Alexey Chadayev, acting head of the Political Department of United Russia, said that Strategy-31 is a cover-up for the intrigues of a number of Kremlin officials. In his opinion, an attack on democracy is conducted by "infantry" so to say (participants of Strategy-31), media (Moskovsky Komsomolets, Kommersant, and Vedomosti), and administrative block comprised of Pamfilova, Timakova, and ideologue Voloshin. Explaining that the attack was formally aimed at Surkov, but in reality it is aimed at Putin, Chadayev came to the conclusion that it was time to protect the constitutional liberties from the Presidential Administration members in pink dresses.

Christina Potupchik, Nashi movement press secretary, used the same wording when describing in her blog President Dmitry Medvedev's trip to Seliger. Among those who went to Lake Seliger with the president the only person in a pink dress was press-secretary of the head state, Natalia Timakova.

Manifestations by the opposition set up a surface PR effect to ease the struggle of one Kremlin gangs with another. This is a fight between Natalia Timakova and Vladistav Surkov, deputy Chief of Staff of Presidential Administration who is hated by the West.

But Surkov is just a sideline goal of the organizers of the Russian Umbrella Revolution. The main task is to remove Vladimir Putin from the political life of the country. Or at least to keep him away from the main political arena, say, by concentrating his interests within Gazprom.

Boris Nemtsov acted out as a disturbed citizen, Surkov is the whipping boy, and the rival faction that is represented by Natalia Timakova, who dreams to take place of "the chief ideologist of the country”. Reportedly, Nemtsov agreed his attack against Surkov with Timakova.