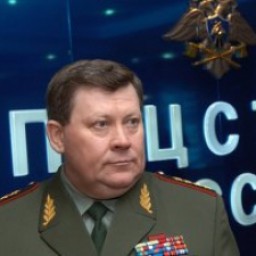 Nikholai Abroskin was born on 1 January 1951  in   Armievo village, Penza region. In 1973 he graduated from  Ogarev Mordovia State University as an animal technician. After graduation  he joined the Armed Forces. He took different educational, personnel and command positions in Rosspetsstroy, the Federal Agency for Special Construction.

In 1997 – 1998  he was the first deputy head of Rosspetsstroy.
In  March 1999 he was appointed head of the Federal Service for Special Construction under the Russian Government.
In May 2000 the FSSC was reorganized as an independent federal body of the executive power. Abroskin was re-appointed its director.

Order for Merit to the Fatherland  4th Grade.

Abroskin is ranked colonel-general.
He is married and has two daughters.

Reports say that, according to record copies of the Moscow  Military Prosecutor's Office, the Federal Service for Special Construction had been used for money laundering for 10 years. Both public and private funds  were  transferred through it and then put into anonymous accounts of commercial banks. No complicated scheme was invented. Mostly, money was laundered through false bills for services actually never provided to the FSSC.

Lieutenant  Colonel Andrei Vdovenko, department head of the FSSC, knew that during the period from April to December 2001   7.025 million dollars had been received from Private post-construction office of the Moscow Military District as a customer, but he did not submit a payment order and a bank statement on a receipt of funds to the account. The money put into the account of his department were transferred to internal bank accounts of International Bank for Trade and Cooperation and used in the interests of the bank.

In 2002  Abroskin's subordinate  Colonel Oleg Kosovan  and an unknown company made an agreement   for '' providing   unarmed security to the department of the FSSC''. According to the agreement terms, 1.4955 million rubles were transferred from the account of the FSSC to  UNITRADECOM production company. In all Kosovan's department transferred 3.564 million rubles to the accounts of  various organizations. The audit found that no company was registered  at the address   indicated in  tax documents and all the companies were shell ones.

Managers of the FSSC, including  Colonel Oleg Kosovan,  succeeded in  construction business as well. It turned out that a 243-apartment  building constructed by the FSSC  was put into service despite more than 900 defects. About 185 million rubles were paid to builders just after acceptance certificate had been signed. However, military experts believed that it would cost 22 million rubles to finish the work and to eliminate the defects. Head of the FSSC  General Abroskin was well aware of his employees' activities. Moreover, he personally wrung out loans of the banks for them.

In 2010  director of  the Federal Service for Special Construction General Nikolai Abroskin got involved in a scandal related to a default on a huge debt to commercial banks. Sobinbank, Finservice, MDM  and Morskoy  banks  issued loans to the FSSC in the total amount of   more than 500 million rubles. Working capital loans were issued on  Abroskin's parole. Despite the fact that 2008 public funds were distributed and the FSSC received the money due, he did not paid off the debt,  although bankers applied to the court and the judge held that Finservice bank should get  257 million rubles from the FSSC.

On 22 April 2011  Dmitry Medvedev finally dismissed Nikolai Abroskin. Abroskin was replaced with   former Deputy Defense Minister Grigory Naginsky. It took 4 years to remove a general who neglected his duties of constructing  defense facilities. At the end of 2009 General Abroskin was first transferred to the civil service, then lost  the most valuable employees in several regions, and only after that was fired.