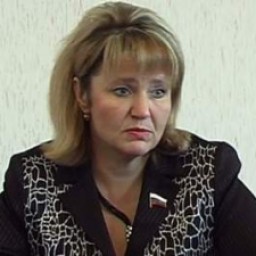 Bio:
Nina Ostanina was born on 26 December 1955  in the Altai region.
In 1978 she graduated from the faculty of history and philology at Altai State University in Barnaul. She worked as a senior lecturer of social science for Altai Medical School and Siberian Mining and Metallurgical College  in Novokuznetsk.
In 1979 he joined the Communist Party.
At the end of 1993 she was a co-founder of Democracy regional bloc supporting  Aman Tuleyev.

Awards
Letter of commendation from the State Duma.
Medal  for 850th anniversary of Moscow.
Medal Pro Fide
Medal 60 years of the Kemerovo region.
Medals   For contributing to the development of Kuzbass  2nd and 3rd Grade.
Order of St.Olga  3rd Grade awarded by the Russian Orthodox Church.
Order of Peacemaker  awarded by Peacemaker the World Charity Alliance.
In 2006 she received Ph.D.degree in sociology.  Her Ph.D.work was titled Russian youth in the labor market: social and  administrative aspects.

She was the deputy chairman of  State Duma Committee on Women, Family and Children.
She is married and has two sons, Daniil and Evgeny.
In 2010  Ostanina earned 1.963 million rubles. She got  two state apartments.  One of the apartments, measuring 111 square  metres, was given to Ostanina for the period of her public service, while another one, measuring   67  square metres, is provided to her for free use.
Source: Wikipedia.

Dossier:
At the end of 1993 Ostanina took part in establishing Democracy regional bloc supporting  Aman Tuleyev. In 1994 – 1995  she was an aide to Tuleev. It was a very good job, as Tuleyev who exploited anti-Moscow sentiments in the cities of Kuznetsk coal basin, or  Kuzbass, was very popular among people of the Kemerovo region. Therefore, while taking part in public events,  Ostanina always sought to be noticed by Tuleyev's side. Also, up to 1999 she was one of the leaders of Democracy, that is, she received a double salary from Tuleyev. Being supported by Tuleyev, Ostanina was elected to the State Duma four times. However, in 2007, when Ostanina broke off her relations with  Tuleyev, she had a difficulty in being elected. In December 2007 very small percent of people voted for the Communist Party in Kuzbass. So, Nina Ostanina had to collect votes additionally in other regions of her electoral district. Interestingly, in 2003, when she was last backed up by Tuleyev, she polled more than 70% in the Kuzbass region. In 2008  she participated in the 13th congress of the Communist Party and joined internal opposition in the party, trying to remove Zyuganov as party leader.

At the end of January 2008 Nina Ostanina applied to the prosecutor of the Kemerovo region. She claimed that a certain Ms. Suprunenko, an accountant of Kemerovo office of the Communist Party, had stolen an office stamp, financial documents, membership dues and party funds and was then in hiding. Police officers  make an inspection of the office and seized all the financial documents. Police discovered  that Ostanina had violated a law  herself, too.  She established special election fund that was not officially registered. During 2007 parliamentary elections  11.7 million rubles were put there. In 2007 communists of the Kemerovo region appealed to Gennady Zyuganov and asked him to stop Ostanina's arbitrary actions

Ostanina's assistants who worked at Kemerovo office of the Communist Party were repeatedly exposed as frauds. Svetlana Tuzovskaya did not paid her debt in the amount of 143,000 rubles to Textile Torg company, while Leonid Burakov extorted money from 300 defrauded shareholders of Guryanin cooperative. He demanded  1000 rubles of each person who appealed to him and asked for assistance in returning the money that were placed in the cooperative. However, Burakov  did not help them and did not return the money he took from them himself, too.

Nina Ostanina, though, set a good example for her subordinates. In 2008 she tried to evade sales tax. She sold two  two-bedroom apartments in Barnaul and Prokopyevsk for 2.56 million rubles. However, in 2009 she declared only 1.8 million rubles in her tax return. Ostanina disregarded Revenue Service's decree on collection of arrears and imposition of a fine. Only in February 2010 magistrate's court made a decision to  collect  76 000 rubles from Ostanina.

In May 2010, after another explosion at Raspadskaya mine and death of miners, Tuleyev's press service spread information that State Duma deputy Nina Ostanina masterminded escalating unrest among workers in Mezhdurechensk and supported previously unknown Union of Kuzbass residents public association. Ostanina denied that, although she admitted  that  she had been going to take part in miners' protest action in Mezhdurechensk. She said she had failed to do that as her car had been stopped by traffic police four times and then she had had a car accident. She stated that the accident had been set up.

Ostanina stated that miners' monthly wage  had been only 15-20 thousand rubles. She also said that  railway track had not been blocked by ''drunken young strangers'', as local authorities claimed before, but it had actually been miners' protest action.

At the end of November 2010 Ostanina's son Daniil was detained for the murder of his business partner  Mikhail Milshtein. Daniil Ostanin gave money intended for development of their joint business to Milshtein, but Milshtein spent it on drugs.   Ostanin and Milstein quarrelled  and in the heat of the quarrel Ostanin killed Milstein with a knife. He was caught in hot pursuit. It turned out he was drugged up as well.

Daniil Ostanin got money for his business after he had defrauded shareholders of Cheremshanskiy Kuzbass open-pit mine of 10 million rubles.

On 17 September  2011 Ostanina said ''Russia does not need  parties of the right, as we are left country naturally  and spiritually.  Ostanina claimed that the Communist Party was supported by 90% of Russian people, which is a blatant lie. Moreover, Ostanina is hardly able to hold her positions in the Communist Party. In April, despite intrigues and attempts at discrediting her rivals, Nina Ostanina failed to become the chairperson of Hope of Russia  All-Russian Women's Union  under the auspices of the Communist Party.