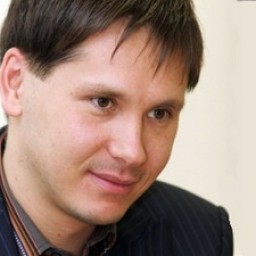 Oleg Leonov was born in 1969 in Kishenev.

In 1992 he graduated from the First Medical Institute in St Petersburg.

In 1991 he founded and headed Rossiysky Posylochny Dom (literally - Russian Parcel House) which in 1993 was transformed into Uniland.

In 1999 he established Dixy grocery chain

In 2007, he sold a controlling stake in Dixy to Igor Kesaev, the owner of Mercury group of companies

Oleg Leonov, the president of Uniland holding, made his first money while still a student.  He sold cheat sheets to those who wanted to pass exams to the First Medical Institute. He hired tutors who prepared answers to the questions that could be asked during the exams, and sent the cheat sheets by mail to everyone who would want to buy them. Such activities brought about 4,000 rubles per month, an average salary at 200 rubles at those times. Then he switched to all kinds of mail orders: Automatic Number Identification, gas pistols, food processors, video tape recorders.

In 1998 Jephson Company acquired from Skania 25 trucks for its Uniland-Transport. Uniland was the guarantor of the deal and Jephson, registered in an offshore zone, was founded specifically for this transaction so that to pay less taxes. Uniland, however, was unable to pay out the whole sum and the status of the trucks remained unclear.

The status of Uniland-Transport was also uncertain. In August 1999, Panda presented papers on the acquisition of Uniland-Transport and appointed a new CEO. Top managers of Uniland did not agree with that. A first instance court sided with Uniland and Jephson Services Inc. However, so far Uniland-Transport remains under the control of Panda, although, according to Oleg Leonov, Uniland managed to prove that the signature of the head of Jephson on the documents was forged. In addition Leonov said that he and his staff were subjected to outdoor surveillance.

By 2000, Uniland-Neva JSC owed 988 thousand dollars to Dresdner Bank. The arbitration court ordered Uniland-Neva to pay out the debt and another 158 thousand dollars for the installment plan covering 54 months. By the end of 2001, however, the payments were not made. In order to enforce the court decision, Dresdner Bank turned to the Arbitration Court of Saint Petersburg and Leningrad region which satisfied the petition of the bank to grant a writ of execution. However, Uniland-Neva again refused to pay, saying that the court had violated its rights by not postponing the hearing due to sickness absence of the company’s CEO and the absence of other representatives at the litigation.

Oleg Leonov, former owner of the grocery chain Dixy, and Valery Bezverkhny, former top manager of the United Aircraft Corporation, in 2010 are going to build housing and integrated homebuilding factories in regions. Another participant in the project is Vitaly Klyuchnikov, the ex-president of Dixy. The project will receive its funding from AYONA fund that is willing to allocate up to 1 billion dollars. The fund’s investors are Leonov and several unidentified businessmen.