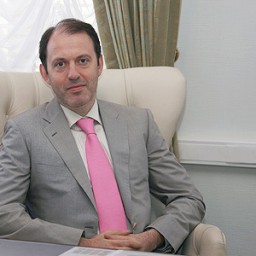 He was born on October, 3rd, 1966 in Moscow; graduated from the Moscow electrotechnical institute of communication and Academy of national economy of G.V.Plehanov;

Doctor of History, professor of the department of history in Moscow State Pedagogical University. From November, 1989 till October, 1993 - President of the company "Westphalia club";

Since January, 1994 - Vice-president of Council in the bank "Oil Alliance";

Since August, 1997 - Chairman of board of directors in Open Society "Information publishing group "Noviye Izvestia "(at the same time he was financial director and holder of a controlling interest (76 %) of "Noviye Izvestia");

On January, 18th, 2008 Mitvol resigned from a post of deputy head of Rosprirodnadzor.

In the end of June, 2009 he obtained a post of prefect of Northern administrative district of the capital.

Married; has a daughter.
Source: www.lenta.ru

In 2003 Mitvol discharged the editor-in-chief and general director of "Noviye Izvestia» Igor Golembiovsky, and the State Office of Public Prosecutor initiated criminal cases on him and his former assistant Sergey Agafonov for a deliberate bankruptcy. According to procesution’s version they had artificially created creditor debts to the firms which purchased the bills of the publishing house. Mitvol told mass-media about three episodes of financial infringements. The first concerned leasing when the appraiser estimated the same equipment in the different sums. The second was about payment of debts to nonexistent firms which whad been confirmed by Agafonov. The third one was a debt creation because of the purchase of bills. According to Mitvol, Golembiovsky was not guilty in that case as that time he had been in the hospital and he had not realized what kind of documents he signed.
Source: "Gazeta.Ru", 4/7/2003

After dismissal of Golembiovsky and Agafonov the control over the finance of «Noviye Izvestia» passed to Mitvol; also he became an owner of the newspaper’s building in Dolgorukovsky street.

Golembiovsky and Agafonov asserted that funds for "Noviye Izvestia" had been devoted by businessman Boris Berezovsky and the management had been charged to Mitvol. Then Berezovsky wanted to sell the newspaper to "Alliance" group. Mitvol did not want to be out of work, therefore he decided to break Berezovsky's deal and to sell "Noviye Izvestia" independently (then 76 percent of shares of the enterprise belonged to Mitvol).
Source: "Lenta.Ru", 8/31/2005

In April, 2004 Mitvol was appointed deputy head of Federal Supervisory Natural Resources Management Service (Rosprirodnadzor); then he began a "cottage war" by liquidation of the cottages constructed in a water protection zone.

In August, 2005 owners of the cottage co-operative society “Friay” on the Istra water basin were accused of violation of the nature protection legislation; workers started to take down their cottages.

Then Mitvol applied to Office of Public Prosecutor concerning former prime minister Mikhail Kasyanov’s summer residence "Sosnovka-1" in Troitse-Lykovo. Experts of Rosprirodnadzor found out that its reconstruction had been made without positive conclusion of the state ecological expertise.
Source: "Lenta.Ru", 8/31/2005

The arbitration court held the deal on privatisation of the summer residence of Kasyanov invalid, however it was not taken away as the judgement concerned not him but the legal persons participating in the auction.
Source: "Commersant", 6/16/2006

Among the constructions planned by Mitvolem to be pulled down there were always those belonged to celebrities – Mitvol promoted himself in such a loud way. In particular it was a summer residence of the former minister of culture of Mikhail Shvydkoy and a bath-house of singer Alla Pugacheva. Suspicions in ecological violations came also on broadcasting company ТNТ creating reality show "Dom-2".
Source: "Lenta.Ru", 8/31/2005

In September, 2005 employees of tax departments arranged audit of accounts of Open Society “Noviye Izvestia” and arrested them. Then attachment was removed but the checks still lasted for some time. At that moment stocks of Mitvol already belonged to his wife Lyudmila. Mitvol considered that check was initiated by Kasyanov, in reply to that he achieved a pulling down of his illegally reconstructed summer residence. Accounts were arrested in the first day of check of Kasyanov’s construction.
Source: "Commersant", 8/31/2005

However Mitvol refused his words, and declared he did not connect the check with Kasyanov and he was not going to achieve at all a pulling down of his summer residence; then he submitted the claim against the newspaper "Commersant" on honour and dignity protection.
Source: "Gazeta.Ru", 9/28/2005

In May, 2005 Mitvol applied to Office of Public Prosecutor with requirement to iniciate a criminal case about obviously false denunciation concerning governor of Belgorod Evgeny Savchenko. It was the reply on Savchenko's statement in Office of Public Prosecutor with the requirement to Mitvol to account for slander. Their conflict was connected with the ground area under building of a branch line from Jakovlevsky mine to the basic highway. Mitvol declared that transfer of those areas from agricultural into transport was illegal. After that Gromov submitted the claim. After the check of Rosprirodnadzor the court recognized unvalid the transfer of the areas from one category to another. On the basis of this fact Mitvol brought an accusation in a false denunciation.

The area which was going to be given under railway construction belonged to company "Inteko-agro" supervised by the Elena Baturina - wife of the mayor of Moscow Jury Luzhkov. In 2004 authirities accused the company of buying up of the area under grey schemes. The regional administration gave the area to "Metal-group" LLC which decided to construct the railway.
Source: "Commersant", 10/5/2005

In 2006 Mitvol opposed inhabitants of villa community "Rechnik" and "Ogorodnik" located in Stroginsky bottom land of Moscow river. He considered that constructions of summer residents disturbed to clear up the river bottom and wished them to be taken down. A secret motive of Mitvol could be the fact that in Stroginsky bottom land realisation of the investment project of the Korean corporation was outlined and the areas could have been sold for 7 billion dollars.
Source: "Aloud.Ru", 2/6/2006

In June, 2006 Mitvol disclosed several employees of the Ministry of Internal Affairs: the employee of Chief Administration (CA) of the Ministry of Internal Affairs for the Central federal district major Valery Pavlyukov and his younger brother, the employee of criminal investigation department Department of Internal Affairs "Basmanny" captain Andrey Pavlyukov, and also Vyacheslav Zaytseva (well-known among Moscow businessmen as Slava-traffic police) which, as he said, tried to give him a bribe through intermediaries. Mitvol did not exclude that people from an environment of prime minister Michael Kasyanov who suffered from Mitvol’s "country" check could be involved in provocation. In Kasyanov's environment these suspicions were named ridiculous. According to Mitvol provocation was connected with elections of 2008 – in a pre-election PR campaign there could be a possibility to present Kasyanov as suffered from actions of dishonest officials.
Source: "Commersant", 6/16/2006

In July, 2007 the Office of Public Prosecutor initiated criminal case on excess of powers with application of violence concerning employees of PSC "Lonvik" protecting TC "European" which didn’t give access to deputy Alexander Hinstein and Mitvol to the construction territory. Hinstein, Mitvol and deputy Sergey Mitrokhin had the instruction of Rosprirodnadzor about constrction check but they were not let het in. To Hinstein’s fingers were pinched with an iron door and then everyone was sprinkled with a concrete dust.
Source: "Gazeta.Ru", 7/17/2006

Mitvol withdrew construstion licence of the object unexpectedly in February, 2006 despite all approvals that constructors had. Mass-media wrote that so favourable construction object couln’t help but draw raiders’attention, unexpected initiative of Mitvol was connected with it.
Source: "Financial News", 7/17/2006

In September, 2006 Mitvol demanded to stop works under the project "Sakhalin-2" having accused the foreign companies participating in the project of drawing of harm to environment. In the companies it aws considered that claims of Mitvol were connected with intension of company "Gazprom" to get a controlling interest of consortium Sakhalin Energy - the operator of the project "Sakhalin-2". In December, 2006 under threat of closing of the project foreign shareholders had to agree for conditions of "Gazprom" which became the main owner of Sakhalin Energy.
Source: www.lenta.ru

Later, in the end of 2007 Mitvol declared that the British company Shell offered him a bribe of 50 million dollars for hushing up check of the project "Sakhalin-2". After failure (Mitvol has refused) Shell also transferred the project to "Gazprom".
Source: "Your Day", 8/9/2007

In December 2006 Mitvol’s bass, head of Rosprirodnadzor Sergey Say initiated internal check of Mitvol’s activity. However the minister of natural resources Jury Trutnev returned Say’s reference back with explanation that according to public reaction his assistant Mitvol worked better than the chief.
Source: "Globalrus.Ru", 12/15/2006

In January, 2007 Mitvol accused the governor of Moscow suburbs Boris Gromov that he refused to register party "Green" for elections in Moscow regional Duma. His wife Lyudmila Mitvol was a member of the party. Mitvol considered it was a revenge of Gromov for inspection of the Mozhaisk sewer pump station which has decayed in spite of the fact that money from regional budget was tranferred for it. Mitvol planned to check up other objects as well which appeared in a similar situation.
Source: "Moscow truth", 1/31/2007

Gromov brought an action against Mitvol because of the publication related to a press conference where Mitvol made statements that Gromov had given the health resorts "Barvikha" and "Zhukovka" for construction, thus few fundshad been transfered to the regional budget for them. The court satisfied the claim of Gromov.
Source: www.lenta.ru

Since 2007 Mitvol repeatedly made complaints against Open Society "Baikal pulp-and-paper mill" (BPPM) in connection with pollution of lake Baikal by crude sewage. Mitvol applied to the Ministry of Internal Affairs and the State Office of Public Prosecutor with the request for opening criminal cases under article 171 CC (illegal business) concerning BPPM. In April, 2009 it became known that BPPM aftrer it stopped on request of nature protection department to use chlorine in manufacture is recognised as unprofitable and it would be closed.
Source: "Our Version", 12/28/2007

On January, 18th, 2008 Mitvol resigned having declared that the step was caused by coming appointment to the post of the head of department of the former vice-governor of Leningrad region Vladimir Kirillov. Mitvol said that he found in the Internet a lot of impartial information about Kirillov concerning suspicions in the swindle connected with the areas. However, his application was rejected by the minister of natural resources Jury Trutnev, and Kirillov after some days obtained the post of a head of Rosprirodnadzor.
Source: "Your Day", 1/23/2008

In summer, 2008 the decision on reduction of amount of assistants to Trutnev was made and in September, 2008 Mitvol was dismissed from Rosprirodnadzor of Russia in connection with staff reduction. Subsequently he decided to protest the dismissal in the court. In December, 2008 the claim was refused. However in the court representatives of department confirmed that is still a deputy head of department. In April, 2009 Mitvol resigned voluntary. In the end of June, 2009 the mayor of Moscow Jury Luzhkov suggested Mitvol to hold a post of the prefect of Northern administrative district of the capital. Official appointment of Mitvol to this post took place in July of the same year.
Source: www.lenta.ru

In the end of January, 2010 Mitvol publicly accused heads of two regional offices of corruption in the territory entrusted to him. Relatives of the head of the board of the Beskudnikovsky area Vladimir Nazarov and the head of the board of the Golovinsky area Valery Kulachkov owned and managed the companies “Omonia” LLC and «Management company Beskudnikovsky area» LLC— unique contractors of accomplishment of territories in those two areas. All available residential properties of areas were under control of those two firms.

Nazarov tried to re-conclude a new contract with "Omonia” and informed that situation with snow cleaning was really bad, and when "Omonia" had been a contractor the situation like that one never happened. Kulachkov started to blackmail prefect Mitvol that noone was going to clean the snow.

In the government of Moscow it’s promissed that police and also financial-control services of Nothern district would be involved to investigate all aspects of the case.
Source: «The Moscow Post", 1/26/2010