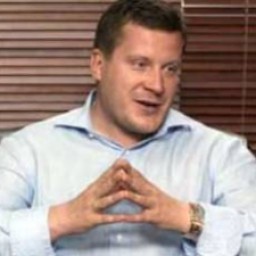 In 1992 he graduated from the Faculty of Physics at Moscow State University.

In 2000-2002 he was the director-general of  the Federal Food Market Regulation Agency.

In 2002 he became director-general of Sigma international investment and consulting group.

Pavel Svirsky has  son Ilya and daughter Liza by his his first wife Lada Dance. Now they are divorced.

In 2006   Svirsky's wealth was estimated at 1 billion rubles.

In 1997  Svirsky provided himself with powerful patrons once he became director-general of  the Federal Food Market Regulation Agency the sole founder of which was the Ministry of Agriculture and Food. The Agency inherited schemes on withdrawal and distribution of  state funds  from formerly eliminated Federal Food Corporation. The position of director-general was a big help in business Svirsky was engaged in  despite the law banning  managers of state unitary enterprises to go into business. During his tenure as director-general, Svirsky became a founder and a co-founder of at least seven companies involved in  purchasing food abroad, and in particular, in frozen chicken legs trade. Hence he was even nicknamed Chicken Leg Tycoon.

In May 2001 police finally paid attention to Svirsky's activity. Investigators of the Stavropol region accused him of serious fraud. Svirsky's accomplice, lawyer Herman Zhadan, produced a forged power of attorney allegedly from shareholders Nevinnomyssky oil extraction plant, according to which   Svirsky  as chairman of the board of directors  had the right to  transfer all the shares to his own corporation, National Product Holding. Financial loss of the plant caused by that operation was estimated at $ 4 million dollars. At that time Svirsky himself chose not to appear at his official residential place. His secretary repeatedly said to investigators that Svirsky was ''ill'', ''out'' or ''away on business''. But on 25 May  2001 Svirsky was finally detained at  Sheremetyevo-2 airport  when he had just arrived from Zurich. Svirsky was allowed to make a phone call. He phoned to Deputy Minister of Agriculture Vladimir Loginov.   Loginov was in no minute at the airport and in hard words demanded to release  Svirsky. But he did not succeed. Svirsky was arrested and sent to Stavropol. However, four days later, on 29 May, he was released on bail owing to Loginov. Loginov's assistant Yuri Kobyakov explained to journalists why Loginov was so concerned about Svirsky  ''Svirsky is  more than a son to Loginov. Why do you think  he can not stand for him?'', he said.

In 2000  Svirsky met singer Lada Volkova also known as Lada Dance. Svirsky skipped courtship and soon arranged a marriage contract, according to which Lada had no right on his property and  was to retire from the stage and become a housewife. Lada Dance stopped giving concerts.

Cruelty verging on sadism turned out to be Svirsky's way of doing things both in business and in  relationships.  Svirsky's country house was mostly coloured black and red inside. The bathroom was separated from the studio with a transparent wall. The bedroom had a huge cast-iron bed and the walls were covered with images of buxom girls  with a whip.

Lada Dance  spent four years with Svirsky and they had two children, Ilya and Liza. The boy took after his father a lot. Lada  told about it in her interviews '' One day my son appeared in the kindergarten with the words ''Hello, kids, it's me, Ilya Svirsky, came to see you!''. Once, riding in a car  Ilya, who was then two years old, was asleep in the backseat. When the car shook  he said to a driver  ''Careful, it's ME you are carrying!'' The car shook once again and Ilya cried ''I said, careful, or I'll give you the sack!''.

At the beginning of 2002 the couple divorced. Lada Dance was left virtually penniless.

In 2004  clients of Creditanstalt company, Austria,   asked Pavel Svirsky  to return 27.5 million shares of Gazprom stolen from them in 1999. It was found that the shares were placed into the accounts of companies controlled by the United Financial Group. In  summer   2004  State Duma deputy Yuri Saveliev blamed the group for illegal  selling of 6.5% of Gazprom's  shares. The United Financial Group put his accusations down to Sigma's scheming.   Svirsky's managers, in turn, said that they ''do not work on the stock market at all''. The scandal was hushed up, but shares of  Gazprom once fell by 12.5%  which resulted in $ 3.3 billion damage to the state-owned share. Police failed to sort the case out.

After a brief stay in the detention centre Svirsky left the post in the Federal Food Market  Regulation Agency ''at his own request'' and got engaged in  hostile takeovers of enterprises specializing in different fields. In 2002 he founded  Sigma   investment consulting group for this purpose.

Svirsky himself not once said that he was like Richard Gere's character in Pretty Woman.  Nonetheless, he always emphasized that ''we have different conditions in Russia''  and ''the trade is unhealthy here''. As a result of ''unhealthy trade'', by February 2006 Svirsky  had committed at least seven attempts of hostile takeovers, failed or successful. Svirsky got away with all the violations.

The largest enterprises that suffered from Svirsky's activity were Red boilermaker boiler  manufacturing company, Kropotkinsky and Labinsky oil extraction plants, SMARTS mobile operator of the Volga region. Svirsky used different schemes. For instance, once Sigma got access to the controlling stake  through purchase of  company's debts. And according to   ''splitting scheme'', unrest among minority shareholders and working groups was fomented. Finally, Svirsky used his connections and forgery talent to falsify  lists of shareholders.
Source: Kommersant Money, 9 August 2004

In 2009  Pavel Svirsky  who was not doing well  during the global crisis  sold  Sigma company to Leonid Mayevsky known to be involved in the conflict between shareholders of Megaphone siding with Alpha Group. In 2011 Sigma fell victim to another investment predator. Debts of  SMARTS mobile operator of the Volga region gave cause to a hidden struggle between  Sigma  and Sistema analytical and financial company.

In 2010 Mayevsky arranged an agreement with the director-general of SMARTS on selling  a 20% stake in Sigma in exchange for mortgage debt. However, representatives of Sistema claimed that Sigma put the right to claim a 32% stake in SMARTS in pledge to them, and applied to the court to get the shares. Managers of SMARTS, in turn, suddenly accused  Sigma  of raider attack and also sued for  2.44 billion compensation. As a result, Sigma was declared bankrupt  and an external manager was appointed to the company.