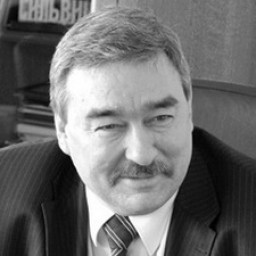 Born in 1949 in Armavir, Krasnodar region.

He graduated from the Mining and Metallurgical Institute in Magnitogorsk, Chelyabinsk region as a mining engineer on technology and complex mechanization of underground mining.

Since 1972 job experience of P. I. Kondrashov is connected with potash industrial complex: he rose from the mountain master to the chief engineer of the enterprise. In 1990 labor team of "Silvinit" elected Kondrashov as the general director.

Peter Ivanovich Kondrashov is an author of 9 scientific works and several inventions. Cand.Tech.Sci., the full member of Academy of mountain sciences.

He is awarded with a number of the governmental and public awards: Order of Honor, badge «Miner's glory» of all three degrees, breastplates: «For wisdom and flexibility of management policy», «For merits to Fatherland», «For active work in trade union», «For fidelity to duty» (Ministry of Internal Affairs of the Russian Federation), a gold sign «Russia Miner» and others.

In 2003 Peter Ivanovich was awarded with rank «Honorable citizen of Solikamsk».

In 2004 P. I. Kondrashov was awarded with the National award of a name of Peter the Great with delivery of a gold Sign and the Diploma «Best manager of Russia».

P. I. Kondrashov is married, has two children – the daughter and the son.
Source: www.chem-vip.ru

In the summer, 2001 company management of "Uralkali" suspected Kondrashov and "Silvinit" in initiation of trial process against the company. The shareholder of company "Uralkali" AO «Investment fund Childhood-1" tried to achieve payment of dividends through court.
Source: "Vedomosti" from 10/9/2001

All other shareholders decided to refuse dividends in favor of enterprise modernization. But unexpectedly it became known that one of shareholders brought an action the claim, and it was satisfied. It was senseless action as at will of the majority of shareholders dividends any way could not be paid. Representatives of AO “Investment fund “Childhood-1" did not show up on the meeting of shareholders and did not state their position. Such mysterious behavior forced a management of "Uralkali" to suppose also that incident was provoked by "Silvinit", the old competitor of the enterprise.
Source: «New partner» from 6/19/2001

Kondrashov ’s enterprise "Silvinit" also appeared in the center of attention of mass-media in connection with the scandal which happened in 2001. Minority shareholders of the enterprise began to submit the claims, actually demanding to cancel its creation.

On September, 18th Krasnooktyabrsky district court of Volgograd recognized registration of the report on release of securities of "Silvinit" at its creation in Federal Commission on Securities in 1999 as void. Claimant Rasud Laipanov demanded to cancel it. Thus, according to National Registration Company, Laipanov was not mentioned in the register of shareholders of "Silvinit" at all.

Kondrashov learned about this claim on accident, during trial in Perm arbitration court of the similar appeal complaint of other shareholder of "Silvinit" - the company «Stone belt».

The similar claim was directed by the inhabitant of Kazan Boris Korentsvet. This time, unlike previous, "Silvinit" was at least sent the summons.

Kondrashov suspected that behind these claims there was an owner of "Uralkali" Dmitry Rybolovlev. For a long time he wanted to receive control over "Silvinit". According to Kondrashov , the company «Stone belt» was created by him. Together with «Stone belt» "Uralkali" already owned a part of shares of "Silvinit", and claims of shareholders, according to Kondrashov , could be favorable only to Rybolovlev.
Source: "Vedomosti" from 10/9/2001

In 2005, Kondrashov ’s enterprise "Silvinit" got Lovozersky MPC. This is unique enterprise in the world on manufacture of loparite concentrate. Recent years the enterprise was in low ebb. Magnesium factory of Solikamsk belonging to "Silvinit", bought its production, however after reconstruction of the factory the concentrate wasn't necessary any more in former volumes. «Silvinit» decided to redeem the enterprise and to pull out it from the crisis. Kondrashov agreed about it with the governor of Murmansk area Yury Evdokimov.
Source: murman.rfn.ru from 1/20/2005

The same year the government offered to the heads of the largest enterprises to lower the profit tax from 24.5 to 20 %. Thus the provided industrial growth would compensate dropping out incomes of the budget. Perm turned out the original offshore within Russia. Many heads of the enterprises sounded a note of warning the tax indulgence nevertheless couldn't quickly raise volumes of their manufactures. However Kondrashov in reply to the offer said that for his enterprise this offer was extremely favorable.
Source: Kommersant (Perm) № 24 (3108) from 2/11/2005

In 2006 "Silvinit" applied for a water canal of Solikamsk, exposed on the auctions for debts saved up for 12 years. According to Kondrashov , such interest was not connected with profit acquisition; social stability in Solikamsk was his purpose as "Silvinit" is city core company.
Source: Kommersant (Perm) № 69 (3400) from 4/19/2006

The same year Kondrashov started to reflect on possibility of the entry of "Silvinit" to «Byelorussian Potash Company», recently created for realization of production of "Belaruskali" and OAO "Uralkali" in the international markets. Kondrashov doubted, whether the BPC could carry on negotiations with foreign countries; for example - with India and China.
Source: Kommersant (Perm) № 90 (3421) from 5/23/2006

In 2007, an action against "Silvinit" and "Uralkali" on suspicion in an unfair competition was brought. FAS suspected that both enterprises exclusively overestimated the price for chloride potassium.

Some experts considered that company "Akron" which wanted to sell the share of actions of "Silvinit" for a long time could act as the claimant.

However, experts asserted that "Silvinit" and "Uralkali" held the prices below export ones, therefore such attention of FAS could be profitable to someone.
Source: аnnews.ru from 30.01.07

Therefore the companies couldn't agree about creation of BPC in any way. «Uralkali» and "Belaruskali" insisted that all production of "Silvinit" was realized through the trader, and "Silvinit" agreed it only in exchange for control of BPC.
Source: Vedomosti from 07.04.06

Kondrashov exclaimed surprise at prosecution by FAS, and informed that the prices at the enterprise are much lower than average world prices.
Source: Advis.ru from 31.01.07

As a result, FAS nevertheless fined "Silvinit" and "Uralkali" on 190 million roubles and ordered to the companies to reduce the prices for potassium.
Source: www.finam.ru from 21.05.07

In 2007 Kondrashov ’s enterprise got ship-building factory "Kama" (OAO "Shipyard Kama»), having left thus from the opaque scheme of possession of this factory. Before that "Silvinit" supervised 30 % of shares of the enterprise.
Source: Kommersant (Perm) № 22 (3598) from 2/13/2007

Even in the spring, 2006 factory "Kama" was got by the new owner – OOO «Verhnekamsky ship-building complex» (VSC). The transaction then was financed by "Silvinit", officially without confirming the participation in it. But soon after reception of permission of FAS on share holding expansion in enterprise Kondrashov openly declared intentions of the reacquisition of the enterprise.
Source: Kommersant (Perm) № 53 (3629) from 3/31/2007

In 2007 Kondrashov nevertheless decided that "Silvinit" would not be a part of Belarus potash company (BPC). In his opinion, in BPC "Uralkali" supervised completely everything, and "Silvinit" was necessary to the company simply as an income source. However, in BPC they said that "Silvinit" addressed with the offer to be a part of founders of the company, but it was ignored.
Source: «Kommersant » № 22 (3598) from 2/13/2007

After purchase of "Kama" "Silvinit" started negotiations with its shareholders about the repayment of their actions. The offer arrived to Sergey Stepanov, but he disagreed with the named price, as it was much less than he wanted. Another one, Mikhail Antonov, was ready to sell the package, but the management of "Silvinit" was not interested in it.

Even in the spring, 2006 factory "Kama" was got by the new owner – OOO «Verhnekamsky ship-building complex» (VSC). The transaction then was financed by "Silvinit", officially without confirming the participation in it.
Source: Kommersant (Perm) № 53 (3629) from 3/31/2007

In April, 2007 it became known that Kondrashov could leave a post of the director of "Silvinit" which he held for 17 years. At that time it was a fourth year of his five years' contract. In the company this news was explained as health problems. However there was also the information that Kondrashov was going to be promoted to Moscow where he could supervise the holding including all actives of the enterprises controlled by "Silvinit" anyway: Solikamsk magnesium factory, Lovozersky MPC, Kopeisk machine works and Shipyard "Kama". Thus Kondrashov planned to keep his place in board of directors of the enterprise.
Source: «Kommersant » № 67 (3643) from 4/20/2007

In the autumn of 2006 "Silvinit" became the supplier of carnallite concentrate for titanic corporation "VSMPO-AVISMA", instead of its basic competitor OAO "Uralkali". The factory then lost its carnallite manufacture because of failure – the mine was flooded. However in 2007 "Silvinit" declared reduction of volumes of output of carnallite after several technical incidents in mine. Experts said that the increase in volumes of extraction was the reason for that. Problems with resources for "Silvinit" could be solved by reception of the license for the Polovodsky site of the Verhnekamsky deposit of the potassium-magnesium salts, which "Rosnedra" was going to expose for the auctions for a long time already. But the auctions were postponed without assigning any reasons.
Source: Kommersant (Ekaterinburg) № 92 (3668) from 5/30/2007

In June, 2007 shareholders complied Kondrashov ’s request for resignation from a post of director of "Silvinit". The former chief engineer of enterprise Rostyam Sabirov became the new general director. Kondrashov remained in board of directors of the enterprise on a post of the vice-president. It was still possible that in Moscow he would head holding which supervise actives of "Silvinit".
Source: Kommersant (Perm) № 95 (3671) from 6/2/2007

In 2007 of "Silvinit" outran the main competitor – "Uralkali" - on production volumes. It happened basically because at first "Uralkali" did not manage to agree about the price for production with India and China, and then at the enterprise there was a failure. But Kondrashov noticed that because of increases in volumes of output his enterprise was working flat out.
Source: «Kommersant » № 131 (3707) from 7/26/2007

In 2010 OOO "Silvinit-capital", affiliated company of "Silvinit" got share holding of OOO «Verhnekamsky ship-building complex» (VSC) which was created on the basis of actives of wasted OAO "Shipyard Kama». Shares were purchased at the offshore «Livelist Limited» which in the beginning of the year redeemed 100% of actions of VSC at OOO «Mineral Group» that supervised non-core assets of majority shareholders of "Silvinit" (presumably, Kondrashov and his partner Anatoly Lomakin). According to one version, "Silvinit" decided to concentrate non-core assets by means of branch. But FAS refused "Silvinit-capital" to purchase 100 % of shares of VSC as the valid owners of the company were not specified in the documents.
Source: Kommersant (Perm) № 148 (4446) from 8/14/2010

Also in 2010 "Silvinit" replaced owners. The package was sold also by Kondrashov . The deputy of State Duma Zelimhan Mutsoev and the co-owner of coal company "Sibuglemet" Anatoly Surkov became new shareholders of the enterprise. Shares were bought in interests of company "Nafta-Moscow" belonging to Suleiman Kerimov. Kerimov is going to merge "Silvinit" and "Uralkali" that was redeemed a bit earlier. Participation of Mutsoev and Surkov was needed to avoid the offer to minorities of "Silvinit" and reception of the permission at FAS.

Kerimov is not the unique applicant for association of the enterprises with "Silvinit". The offer on it was brought to government by "Fosagro", and also State Corporation "Rostechnologies". And WHAT HAPPENED TO KONDRASHOV ’S SHARE?
Source: Kommersant (Perm) № 149 (4447) from 8/17/2010