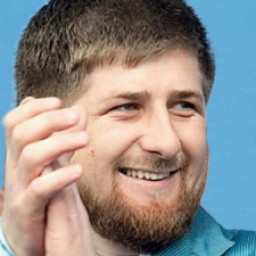 Ramzan Kadyrov (born on 5 October 1976, Tsentoroy village, Chechen-Ingush Autonomous SSR) finished secondary school no.1 in his home settlement now called Tsentora-Yurt (Kurchaloevsky district of Chechnya). In 2004 he graduated from the law faculty of the Makhachkala Institute of Business and Law with honors.

During the first Chechen war he fought against Russian federal forces on the separatists’ side.

1996-2000 advisor and personal bodyguard of his father, a senior Muslim leader and mufti of Chechnya Akhmad-Khadji Kadyrov who called for a jihad against the Russians

In autumn 1999, together with his father, Ramzan joined federal forces.

On 10 May 2004, the next day after his father’s assassination in the result of bombing of the stadium in Grozny, Kadyrov was appointed deputy prime minister of the Chechen republic

Second half of October 2004 advisor to Dmitry Kozak, the presidential plenipotentiary in the South Federal District, responsible for cooperation with security forces in the district

Order of Merit for the Fatherland 4th Grade (2006)

Medal of Merit for All-Russia Census

Order for Development of Parliamentary Rule in the Chechen Republic (2007)

“Defender of the Chechen Republic” Medal (2006)

Medal for Participation in Counterterrorist Operation in the Chechen Republic (2006)

Medal for Service in the Caucasus (2006)

Medal for Development of Agriculture (2011)

Badge For Achievements in the Field of Culture (2007)

“Aqsaqal, or Man of Honour” Prize in nomination “Caucasian politician 2008”

Honorary professor of the Modern Academy of Humanities (2006)

After 10 years of severe conflict between the federal forces and the Chechen separatists Akhmad Kadyrov came to power and the Chechens began to do the job of Russian soldiers, the Guardian (UK) claimed in 2003. Four thousand strong personal guard of newly elected president Akhmad Kadyrov, led by his son Ramzan, began to carry out mopping up operations, the fighters of the president guard imprisoning, interrogating, torturing and killing alleged separatists in the name of “stabilizing situation”. Chechnya has entered the worst phase of the conflict when the federal centre looks through the fingers at violence and even provoked it by officially saying that it was the republic’s domestic affair.

Zulay Kadyrova and her three bodyguards were arrested in Khasavyurt (Dagestan) for illegally carrying weapons on 10 January 2005. The same day Zulay’s brother Ramzan Kadyrov with the group of Chechen president’s guardians beat up Dagestan’s policemen and freed Zulay.

In 2006 representatives of St Petersburg-based Salolin JSC approached Ramzan Kadyrov and Sulim Yamadayev, the Lieutenant Colonel, commander of Vostok (East) battalion (both Kadyrov and Yamadayev are from Benoi clan). They asked to “help” them get back 54 hectare land plot which had been seized from Salolin by Samson meat factory, owned by Moscow-based Abubabakar Arsamakov’s Moscow Industrial bank.

Kadyrov sent Yamadayev to St Petersburg to sort out conflict situation with the land.

In September 2006 the car with 20 armed people from the North Caucasus stopped in front of the factory. They disarmed the company’s securities at the entrance and put there their own post. The assailants also put fighters at the key points on the way to the main office and cut off communication in the office. Than the man who looked like Sulim Yamadayev entered the office of the director general.

Director general of Samson factory Khamzat Arsamakov (Abubakar Arsamakov’s nephew) was “asked” to sign the document that could solve the conflict in favor of Salolin JSC. Levan Kharazov, head of Salolin, was also present when the armed people talked with Arsamakov. Kharazov came with his own group of fighters.

At 2 am the armed people left the factory. Arsamakov was found lying on the carpet in his office. He was hospitalized. Doctors who examined him said: “He was not beaten, he was tortured”.

Ramzan Kadyrov gave Sulim Yamadayev 2 jeeps and a large sum of US dollars.

In 2007 Ramzan Kadyrov was reported to be involved in the conflict over Kislovodsk-based garment factory called Progress. Chechen riot police officers threatened local Cossacks from the private security company with guns: “the factory belongs to president Ramzan Kadyrov”.

Umar S. Israilov, 27, former bodyguard to president Ramzan Kadyrov, was shot in Vienna on 13 January. On 31 January The New York Times published an article, containing Israilov and his father Sharpuddi’s testimony about secret prisons in Chechnya. The Israilovs said that they sake justice and wanted to stop lawlessness of Russian and Chechen authorities. In 2006 they filed a complaint against Russia in the European court of Human Rights.

Umar Israilov testified that during his 10 months service as Kadyrov’s bodyguard in Tsentoroye he had seen at least 20 people secretly kept and tortured there. Many of the prisoners were separatists’ relatives and members of their families.

Israilov was not the first Chechen who filed a lawsuit against Kadyrov of Chechnya. In 2006 Mokhmadsalakh Masayev accused Kadyrov and the administration of the republic of his abduction.

Concerts of pop singers and corporate events took place in the sports club called Ramzan. The club grew rapidly. Akhmad Kadyrov Foundation sponsored building works: the club opened branches in Tsentoroy and Kurchaloy settlements, and all other countries. Central building of the club in Gudermes became unofficial residence of president Ramzan Kadyrov. This club, as well as Kadyrov's own zoo with leopards, tigers, lions and wolves is the evidence of his eccentricity. According to the information of Skrin company, director of Ramzan sports club is Ramzan Kadyrov, the founder is the administration of the Chechen Republic.

The president's guests who sang «good old songs» at Ramzan club, received gifts and honorary titles. These gifts were called nothing else but Ramzan's gifts.

In 2008 Russian pop singer Sergey Zveryev received gifts worth $100,000 from Ramzan Kadyrov. Another pop star Yana Rudkovskay received a Porsche Cayenne Turbo worth $250,000 as a birthday present. The car was reported by Russian media to be “Ramzan’s gift”. After the scandal broke out, Kadyrov contradicted information about yje costly gift. Being asked by Ekho Moskvy radio station, Kadyrov said: “The car is a gift from a rich businessman. I do not want to reveal his identity”.

In 2007, shortly before his birthday Ramzan Kadyrov bought an Arabian stallion, nicknamed Eselmdish worth 1m roubles, according to Russian media. The media reported that the stallion was bought by Kadyrov as a birthday present for himself.

Medal For Services to the Chechen Republic was confered on Aleksandr Maslyukov, the president of international union of the KVN teams (competition in amateur stand-up comedy), by the decree of the Chechen president. The captains of 3 Chechen teams of the KVN received a VAZ-2110 car each - from the Akhmad Kadyrov Regional Public Foundation. The same year Ramzan Kadyrov at once officially gave Russian pop singer Filipp Kirkorov honorary title «the people's artist» of two Caucasus republics - Chechnya and Ingushetiya.

In summer 2006 Ramzan Kadyrov signed a decree to confere honorary title «the people's artist» on Pierre Narcisse, Cameroon-born singer and participant of the First Channel show called Star Factory who gained popularity for his song «Chocolate bunny». Narcisse received an expensive Swiss watch as a gift from the president. The same year Vakhit Usmayev, commander of the special regiment of militia no.2, received Mercedes S500 as a gift from Akhmad Kadyrov Foundation. Ordinary soldiers received a few millions of roubles of help from the same organisation. Ramzan Kadyrov presented the gifts personally.

In 2010 Chechen businessman Isa Yamadayev published an open letter, claiming Ramzan Kadyrov ordered his assassination. Yamadayev refered to the video showing a Khavazha Yusupov, presumably Yamadayev's bodyguard, under interogation. The man said that Ramzan Kadyrov had hired him as an assassin to kill Yamadayev.

On the record which Yasa Yamadayev said he received at the investigative committee the man says that Kadyrov's aide Shaa Turlayev brought him to the president's office. Having threatened to kill members of Yusupov's family, Kadyrov ordered to kill Isa Yamadayev. Yusupov adds that Kadyrov told him that he also hired a hitman to kill Sulim and Ruslan Yamadayev.

On the same video Yusupov claims that Turlayev gave him a gun and money and went to Isa Yamadayev and tried to kill him. He says the Chechen president was going to pay him for Yamadayev's murder.

The Chechen Republic has stopped providing Russian army with troops for national service since 1991. However, recently the commissariats have been restored on the territtory of Chechnya. They draft young men for military service and maintain records on military manpower. In 2011 about 7000 men were registered, a few hundreds were sent to the military units of Chechen interior ministry. <…> The reserves for future full-fledged army have already been created in Chechnya.

The structure of Ramzan Kadyrov's army as of 2011:

Total number of the forces loyal to Ramzan Kadyrov may be between 10-12 thousand people.

Chechnya is the only region in Russia, where the Kremlin agreed to keep local military forces which are under direct control of the head of the republic. Ramzan Kadyrov may raise up to 30 thousand fully equiped troops ready to fight under his banners, according to the sources. This force is loyal to Putin's administration, the analysts say.