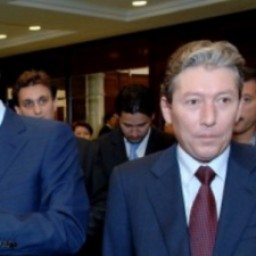 Formed in 1991, LUKOIL became first Russian oil company to begin offering shares to foreign investors. Merger of state-run oil production plants in Langepas, Uray and Kogalym, and two oil refinery plants in Volgograd and Perm, firmed the company. The initials of three Siberian cities gave the name of the company - LUKoil. The idea belonged to Ravil Maganov, director of Langepasneftegaz. Vagit Alekperov appreciated the idea and paid Maganov 300 roubles as an award.

In June 2002 vice president of  LUKoil Ralif Safin, who is a father and chief sponsor of popular singer Alsou, was ousted from the company. Maganov was reported to pushed out Safin, because “he could’t handle his job the way the responsibilities of top manager require” and abused alcohol.

In 2010 tax inspectorate for the Odintsovo District of the Moscow Region said that Ravil Maganov, millionaire with the wealth of estimated 230m and co-owner of the largest private oil company LUKOIL (0.368% of shares), did not pay taxes for his real estate property in the Moscow Region. The duties he had to pay amounted to 114,000 roubles ($4000).

In 2011 Maganov was ranked 88th in the list of the top managers with the highest salary. His annual income amounted to 67.11m roubles ($2.4)