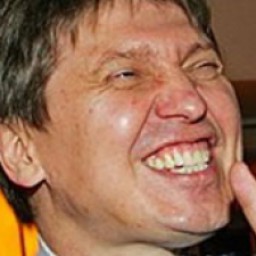 Bio:
Sergei Chernikov was born on 21 January  1964  in Sterlitamak city of Bashkir ASSR.
In 1984 he graduated from Sterlitamak chemical engineering college.
In1984-1986 he served in the army.
In 1987 Chernikov got engaged in business.
In 1995 - 1998 he was the director-general of  Finneftehimprodukt LLC.
1998 - 2001 he was a project manager of  EMBIEL real estate agency.
In 2000  he graduated both from  Institute of Management, Economics, Law and Informatics and from Shuya State Pedagogical University.
In 2000-2001 he was the first deputy chief of the North-Western department of the Ministry of Natural Resources, and then for a few months he had been first vice-governor of Nenets Autonomous District.
In 2001-  2005 headed  Petrotek-Holding company.
In 2002 he became chairman of the board of directors of CanBaikal Resources company.
In 2005- 2007 was the director-general of   Bashkirskaya Khimiya closed corporation.
In 2008 he joined the Public Chamber of Russia.
Chernikov has a son and a daughter. His family lives in Canada.
Source: RusPres

In 2002 Chernikov and his partners invested money  in CanBaikal Resources Canadian oil company. However, as Chernikov admitted, the  investments did not pay its way during a year.

Another  their undertaking were experimental  online  projects. Under Chernikov’s direction cheloveche.ru network was created, but  Chernikov failed even to describe its functions. It was praiseworthy of him to look for the way off the beaten track in business and it was  quite reasonable to invest in online industry, but Chernikov lacked any activity concept  in this field. As a result, his ideas turned out to be idle.

In 2009 Sergei Chernikov was a mastermind of  the scandalous deal on  a purchase of Berezniki Soda Plant, Russia's largest soda ash producer incorporated by Bashkirskaya Khimiya. Two companies applied  for the plant,    Solvay company, Belgia, and  Soda company  operated by Petrotek Group through  Bashkirskaya Khimiya closed corporation.   Owner of the plant  Valery Zakoptelov and Solvay's management came to an agreement about the purchase. As Zakoptelov sorely needed money at that time he insisted that the deal must be made  no later than 31 May   2010, otherwise  it would be  denounced. Solvay filed an application to the Federal Antimonopoly Service. After a six-month  protraction and endless inspections the FAS did not authorized the deal, yet. However, immediately after  the agreement between Zakoptelov  and Solvay had expired  the FAS  permitted a purchase of Berezniki Soda Plant to all the  companies that had filed an application by that time. Those were  Soda, Solvay  and Caustic owned by Bashkirskaya Khimiya. Permission was issued on   4  June and on the same day Berzniki Soda Plant was sold to Caustic.

In June 2010  Chernikov through a long chain of Petrotek's subsidiaries received site development licence for building up Kadashevskaya suburb as a part of construction project of the Moscow Government  started  in   2002. Most likely, Chernikov promised a kickback to some officials to win the tender.

Previous development project was rejected under public pressure in spring 2010 because of the threat to historical architectural monuments. So starting a build-up  of Kadashevskaya was an arbitrary decision of Moscow officials. Representatives of Architectural control public movement and  local residents made a stand for the architectural complex.  They blocked the road and started a fight with security officers of the company. The conflict started on  17 May and  reached its climax on 6 June when only a human chain of protesters managed to prevent builders from destroying  Kadashevskaya. Only after inteference of Moscow deputies a moratorium on a development project was declared.

According to Finance magazine, in 2011 Chernikov whose wealth was estimated  at 6.4 billion rubles was ranked  408  in the list of Russia's richest businessmen, whereas in 2010 he was ranked 287.