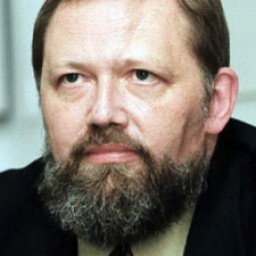 Sergey Dubinin was born on 10 December  1950  in Moscow.
In 1973 he graduated from the faculty of economics at  Moscow State University   as an economist and a lecturer in political economy.
In 1973-1991 he was a graduate student, then a senior lecturer, an associate professor, and a senior researcher at the faculty of economics of Moscow State University. In 1990 he defended a doctoral thesis on "Budget and financial management of the economy and its impact on  competitiveness of national economy of capitalist countries. "
1991-1992  he was an economic  consultant to the USSR Presidential Administration.
In 1993-1994 he was  the First Deputy Minister of Finance of Russia.
In January 1994 he became acting  Finance Minister. He was dismissed from this post after  Black Tuesday, 11 October 1994, when ruble exchange rate suddenly sank.
In 1994 - 995  he was the first deputy chairman of the board of  Imperial commercial bank.
In August 1995 he joined the board of  Gazprom.
In 1995 – 1998 he was the chairman of the Central Bank of Russia. He was dismissed after the default in August 1998.
In  October 1998 he became a deputy chairman of  Gazprom public corporation.
In  2001 he became a deputy chairman   of RAO  UES of Russia.
In  2005 he was appointed the chief financial officer of RAO  UES of Russia.
In 2008 he joined the board of directors of VTB Capital.
Since 2011 he has been the chairman of the supervisory board of VTB.
Dubinin is fluent in English and Italian. He is married and has two sons.
Source: Wikipedia

Last year chairman of the Central Bank Sergey Dubinin  officially earned one billion two hundred fifty eight million rubles. Well, and some small change. It is about 20 thousand dollars a month at dollar rate of 1997. That is, approximately 240 thousand dollars a year, almost as much as the President of America earns. It is an official document signed by deputy chief accountant of the Central Bank Ilyukhina which on  8 February  1998 was sent to Moscow State Tax Inspectorate.
Until recently Dubinin was the chairman of the Central Bank. His personal annual income was equal to the budget of two State Tax Service departments, five large schools in Moscow  funded only with teachers' salary, and twelve village schools, for instance of the Tver region,  where schools have difficulties even with purchasing chalk,  or equal to salaries of  210 ministers and deputies. Dubinin's salary is only one-fifth less than the budget of an outpatient department in Moscow. And an inter-district hospital in Dagestan receives almost as much money as the chairman of the Central Bank.

La Repubblica launched a new campaign against financial fraud of the Russian authorities. This time the newspaper looked into activity of  the International Monetary Fund. La Repubblica published a series of articles titled The Way IMF was Defrauded.  The first article covered the story of the first tranche of a $ 11.2 billion stabilization loan   which amounted to 4.782 billion and was issued to Russia on 20 July 1998, just before the crisis of 17 August 1998. The newspaper claimed to have got private documents of the RF Accounting Chamber  which proved that the sum of that tranche was used not for support of  the economy, but for a turn over in insider transactions. As a result, 27 Russian banks  transferred about  6 billion dollars to their accounts. According to the newspaper, Russia's Ministry of Finance and former Finance Minister Mikhail Zadornov along with  first Deputy Finance Minister Alexei Kudrin put pressure on the IMF so that the fund would transfer the first tranche of the loan  to the account of the U.S. Federal Reserve Bank alone. At that  time on August 16  1998 Boris Yeltsin signed a decree which entitled the Central Bank to spend the entire tranche of the loan on increasing its foreign reserves.
From  27 July to 18 August 1998 a $ 4.5 billion tranche was transferred from the initial account of the Central Bank of Russia to the account  N608555800  of Federal Reserve Bank in Republic National Bank of New York.  According to the documents of the Accounting Chamber, that account could only be used for foreign currency sales on foreign exchange, sales of foreign currency to commercial banks, and transfers ordered by  the RF Ministry of Finance. On 27 July   400 million dollars were deposited there. From 27 July to 24 August  21.4 billion dollars were transferred to the account from different sources, including money from the loan of International Monetary Fund. And at the same period, 21.5 billion were written off the account. The records say that  by 24 August over   300 million dollars had been deposited into the account again. After the crisis of August 1998 the Central Bank of Russia provided a number of banks with loans totaling 35 billion rubles. They were recorded as received, while the debt was immediately covered with bonds of the Central Bank  and other securities  that lost its value on 17 August.

Is it true that  former chairman of the Central Bank Sergei Dubinin was involved in the default of August '98? Former Prosecutor General of Russia Yuri Skuratov who had investigated the cause  of the financial disaster said  "Absolutely ... Why were miscalculations made at the issue  of Government Treasury bonds ? As far back as December 1997 it was known that the income earned from the bonds did not exceed  maintenance payments costs. It was clear then that a financial pyramid had been formed, which sooner or later would collapse. But though the Central Bank, which was a major portfolio holders of Government Treasury bonds, already knew about that, it placed new bond packages on the market and thus aggravated the situation.  Why was that done? Because many of the officials  responsible for financial policy  were market participants themselves . "