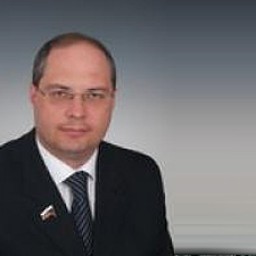 Sergey Gavrilov was born January 27, 1966 in Tula. Graduated from Moscow State University and the Academy of State Service under the President of Russia; Ph.D. in Economics; Elected President of Association of Young Economists and politicians in "New Generation"; was deputy of the Tula City Council, led the subcommittee on Youth.

In 2003, unsuccessfully ran for the State Duma of the third convocation from the "Communist Party of Russia (CPRF). He ran under #3 of the regional group  "Southern Black Earth" (Belgorod region, Voronezh region, Kursk region).

2005 - Consultant of the CPRF Central Committee on Economic Affairs.

Prior to 2005 - acting lead researcher of the Institute of International Economic and Political Studies, Russia Academy of Sciences, head of the Center for Studies of economic crises and armed conflicts.

In 2005 - 2007 - Member of the Belgorod Regional Duma of the fourth convocation on a temporary basis (nominated by electoral association "Belgorod regional office of the political party «Communist Party of RF»). On December 27, 2007 Gavrilov's powers were terminated due to his election as deputy of the State Duma.

In 2007 - Adviser to the Director General of JSC «Voronezh Stock Aircraft Community” (VSAC).  Gavrilov's duties included provision of airlineenterprise interaction with the federal bodies of the state power. VSAC specializes in production of long-haul wide-body air-crafts of the family of IL-96 (IL-96-300, IL-96-400 and all-cargo aircraft IL-96-400T), various aircraft components made of polymer composite materials.

Since December 2007 - deputy of the State Duma Federal Assembly of the Fifth convocation  (he ran for a post in the Voronezh region in the regional group of the federal list of candidates nominated by the Communist Party); member of the faction of the Communist Party of Russia.

Gavrilov is married and has three children.
Source: www.lobbying.ru

Scandalous information about Sergei Gavrilov appeared in the media in 2007. It was because of the unusual biography of Gavrilov: Sergey Gavrilov started his career in the mid of the 90's; then he began working for the National Reserve Bank with Alexander Lebedev, Russian well-known businessman and former diplomat, currentlychairman of the Board of Directors of CJSC «National Reserve Corporation», former Deputy of the State Duma of Russia. Gavrilov's relations with Lebedev strained after a few months of working together; and Sergey Gavrilov together with a KGB colonel named Yavlyuhin was sent first to Vnesheconombank, and then to Vneshtorgbank.

The next period of Sergei Gavrilov's life was strangely connected with local wars - he was in Transdniestria and Abkhazia when the republics had Civil Wars flared up. He was in Kosovo, then in Iran and Iraq - also in times of armed conflicts there. Gavrilov has been twice in Baghdad - during the first and second wars (together with Gennady Zyuganov he strengthened the legitimacy of the regime of Saddam Hussein). Gavrilov was in the Crimea when confrontation between Ukrainians and Crimean Tatarsthere occurred there. All of those trips Sergey Gavrilov combined with his main work in the MiG corporation in which he officially oversaw the execution of the corporation export contracts. In fact, he was a member of the acting pool of intelligence agencies.

There were officers from the security agencies of St. Petersburg, presidential aide Igor Sechin among the contacts of Gavrilov at that time. Subsequently Gavrilov was appointed the head of the Center for economic crises and armed conflicts research at the suggestion of Director of the Foreign Intelligence Service Sergei Lebedev.  Gavrilov's career in politics was a total surprise for everyone — on decision of the XII Congress of the Communist Party he headed the list of the Communist Party from the city of Voronezh, became an adviser to deputy chairman of the State Duma Valentin Kuptsov. Gennady Zyuganov promoted Gavrilov. Nowadays Gavrilov is still considered to be a security officer. From personal life: Sergey Gavrilov - a devout person, he confesses to Father Tikhon (Shevkunov) in Sretensky Monastery.
Source: solomin on 01/10/2007

In January 2010 the name of Sergei Gavrilov was associated with elections to the Voronezh Regional Duma. He arranged patronage of Constantine Afishin there, deputy head of the airline "Ruslayn». Owner of the company Nicholas Ulanov financed campaign of the Voronezh Communists. Sergey Gavrilov headed one of the territorial groups of the Communist Party in Voronezh, the other two were led by his colleagues - Victor Ilyukhin and Ruslan Gostev.
Source: "Kommersant" (Voronezh) # 2 (4300) on 12/01/2010

In December 2007, during his election campaign as a candidate for the State Duma of the Voronezh region Sergey Gavrilov confessed that as a PR man he had been involved in three dozens of election campaigns, such as Aleksandr Lebed's and Leonid Kuchma's compaigns.
Source: www.voronezh-media.ru on 04/12/2007

In 2007, it was openly said that Sergei Gavrilov - henchman of the State Duma of the fourth convocation deputy Alexander Lebedev (a member of the party "Fair Russia"); according to some sources, he needed an insider in the Duma to represent the interests of JSC «Voronezh Aircraft Company"(Lebedev owns a stake in an aircraft factory).
Source: "Kommersant" (Voronezh) # 152 (3728) on 24/08/2007

Sergey Gavrilov come in a view of the media when he proposed to tighten the moderation of the leading Internet resources of Russia. He decided to actively oppose pornography. Gavrilov proposed fighting depravity through legislative measures, like developing bills aimed at tightening the state policy regarding the sites posting virtueless materials.
Source: www.telnews.ru of 09.10.2008

Lobbying.ru website has information posted that in 2007 Sergey Gavrilov owned 2,205,882 shares of OJSC "Bank VTB". Other sources about the fact are absent. Nevertheless, Sergei Gavrilov's  relationship with OJSC "Bank VTB" can be observed in other areas - in particular, in August 2009 Gavrilov participated in the presentation of the new aircraft CRJ-200 transferred by VTB-Leasing airline to «Air VOLGA»( Volga-Aviaexpress ") for leasing. Besides, Gavrilov brought an accusation  against the Finance Ministry as it had not been protecting interests of depositors - victims of financial scams and shareholders of different banks; he said that only VTB offered an adequate compensation program.
Source: Lobbying.ru, www.vtb.ru from 10.08.2009, www.kprf.ru on 13/05/2009

Sergey Gavrilov openly supported the governor of the Samara region Vladimir Artyakov when the latter had been accused of embezzling funds in the amount of 1,5 million rubles. He defended the governor's interests despite the fact that some "communists" were ardent opponents of the policy of Artyakov towards the staff of AvtoVAZ and the fate of the enterprise as a whole. Gavrilov turned to the federal government with a request not to charge a fault upon Vladimir Artyakov for the failure of the government's plan of transferring the social infrastructure «AvtoVAZ» to the municipal and regional balance. Some of the Communists accused Gavrilov of supporting illegal actions of the official.
Source: http://forum-msk.org/material/news/