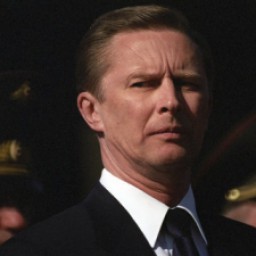 In 1975 he graduated from the Philological Faculty of Leningrad State University and in 1977 from the KGB Higher School. After graduating from the Higher School of the KGB of the USSR he met Vladimir Putin.

In 1982 he graduated from Red Banner Institute of the Soviet KGB.

After graduating from Leningrad State University he began his career as trainee professor at the Leningrad Higher Naval Engineering College. Then he was a detective officer and held various positions in the KGB of the USSR in Leningrad region.

In 1982 he started out as a security officer of the First Main Directorate of the KGB and by 1998 he was promoted several times and became the first deputy head of one of the offices of the Foreign Intelligence Service of Russia.

In 1998 -1999 he was Deputy Director and later Head of the Department of analysis, forecasting and strategic planning of the Federal Security Service of the Russian Federation.

On March 28, 2001 he was appointed Minister of Defense

On March 20, 2006 Ivanov was appointed head of the Military-Industrial Commission under the Russian government. The budget of the committee was about $ 25 billion.

In May 2006 Ivanov was included in the federal headquarters of the National Anti-Terrorist Committee (NAC).

In December 2006 he was elected head of the United Aircraft Corporation.

On February 15, 2007 he was appointed First Deputy Prime Minister

Since May 2008 he has been deputy prime minister in the government of Vladimir Putin.

He was awarded the Order of Merit, II degree.

In 2010 Ivanov stated his income in his tax return at 4.5 million rubles, and his wife Irina had an income of 4.8 million rubles. The spouses own an apartment with total area of ​​257 square metres and Ivanov owns an apartment of ​​47.3 square metres. In addition, the tax return includes a government-owned dacha at his disposal while he remains on government service. The deputy prime minister also owns 21 thousand 146 square meters of land for individual housing construction, and his wife owns a land plot of 2905 square metres.

He is married and has two sons who work in banking.

According to British press, Ivanov left the position of second secretary of the embassy ​​which he filled from 1981 to 1983 because he was expelled from Britain on suspicion of spying. Ivanov was authorized to control the supply of arms to the continent. There was also an opinion that KGB defector Oleg Gordievsky was involved in exposing Ivanov.

Many accidents and unfortunate incidents happened in the Russian army since Ivanov’s appointment as Defense Minister. Orbit missile warning control station burnt down, ammunition warehouses in different regions of Russia exploded and burnt, helicopters (including one shoot down in Khankala that was a cargo Mi-26 with 119 wounded people on board) and airplanes crashed, submarines sank, bathyscaphes lost control (it was possible to save bathyscaphe AS-28, belonging to the Pacific Fleet only with the help of a potential enemy - the United Kingdom). Also there was a series of catastrophes in space.

On March 20, 2006 Ivanov was appointed head of the Military-Industrial Commission under the Russian government. The budget of the committee was about $ 25 billion. The right to dispose of these funds, as well as to control the means of the state defense order, passing through budgets of other agencies, was granted to the defense minister. In particular, Ivanov was given the opportunity to distribute export orders for military-technical equipment among Russian companies in the framework of cooperation between Russia and foreign countries.

In May 2005 Ivanov’s eldest son Alexander ran over a Moscow pensioner Svetlana Beridze, but in November of the same year the criminal case initiated against him was dismissed for alleged lack of corpus delicti in the actions of the driver. Relatives of the victim complained about the unfair investigation of the case.

In December 2005 case proceedings were instituted against the husband of the dead woman. He was charged with beating Alexander Ivanov immediately after the accident, but later the son of the Minister dropped charges against the man.

On New Year's Eve 2006 Andrey Sychev, who was drafted to serve at a support battalion of Chelyabinsk Tank School, was subjected to abuse by Sergeant Sivyakov, who was drunk and forced the victim to squat and remain in this position for a few hours on the night of January 1. Sychev became disabled because of thrombophlebitis, gangrene, and sepsis that he developed as a result. The case was widely publicized.

A conflict erupted between the Main Military Prosecutor's Office headed by Alexander Savenkov, and the Ministry of Defense headed by Sergey Ivanov. Alexander Savenkov pointed to an increase in bullying in the armed forces and the dysfunctional staffing situation in the army. The Main Military Prosecutor's Office supported by the Attorney General Vladimir Ustinov accused the military of hiding this crime and other similar crimes and promised to personally supervise the investigation of the incident.

But in the midst of the trial against Sychev Ustinov and Savenkov had to resign, according to some analysts, it was due to their excessive activity in the attacks on Sergey Ivanov.

It was believed that Ivanov, in contrast to other officials was in no way connected with business. But the same cannot be said about his wife. Since September 1999, about five years Irina Ivanova worked in Moscow Company Solvay Pharma, which represents the interests of the international chemical and pharmaceutical group Solvay - namely, its affiliated companies Solvay Pharmaceuticals. At the same time Irina Ivanova received money from Alcatel Company, the world's largest manufacturer and integrator of telecommunication systems, with headquarters in Paris. Just in the period from January to August 1999 she received more than a million rubles. Since 2004 Irina Ivanova has worked at the Central Bank.

In 2009 the son of Sergey Ivanov became deputy chairman of the managing board of Gazprombank. He is also a shareholder of Gazprombank and owns 0.113% of the shares. Ivanov is concurrently on the Board of Directors of the Armenian-Russian Export-Import Bank, a group of Gazprombank, Gazprombank Leasing closed JSC, Chemmash Group closed JSC, Outpost Management closed JSC, Izhorskiye Zavody (Izhora Plants) JSC, Objedinennye Mashinostroitelnye Zavody (United Heavy Machinery Plants) JSC ", Atomstroyexport, Gazprombank-Invest Ltd, Carbon Trade & Finance SIGAR SA, and also occupies the post of Deputy Chairman of the Board of Directors of the Bank Sibirgazbank.

In 2011 the Board of Directors of SOGAZ JSC, one of the largest insurance companies in Russia, appointed Sergey Ivanov, Jr., son of Vice-Premier Sergey Ivanov chairman of the company. Prior to that he worked at Gazprombank, the largest shareholder of SOGAZ. The eldest son of the deputy Prime Minister, Alexander Ivanov, is a top manager in Vnesheconombank.