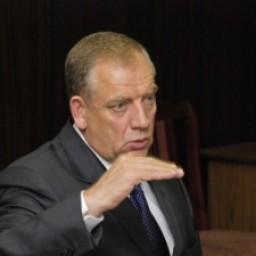 Sergei Mitin was born on 14 June, 1951 in Gorky (a city later renamed Nizhny Novgorod). In 1974 he graduated from the Gorky Polytechnic Institute and afterwards took a Doctor of Economics degree.

In 1974 – 1995 he worked for Ulyanov Plant Gorky production association (since 1993 named Termal Nizhny Novgorod public corporation). He was a foreman, then a production director, an engineering manager, a deputy director general and, finally, the director general.

In 1995-1997 he was a deputy of the State Duma of the second convocation representing pro-government Our Home – Russia political party. Mitin was a deputy chairman  of State Duma financial  committee.

In 2004 – head of industry sector at the Ministry of Industry and Energy.

Since 2007  he has been a member of the Government Nanotechnology Council.

Since 2007  he has been the governor of the Novgorod region.

Letter of commendation from the Russian Government.

He is married to Vera Mitina, the main specialist at the Moscow Department of Education. He has a daughter, born in 1982. She graduated from the Nizhny Novgorod secondary school N13 specialized in linguistics. Now she lives in Moscow.

Reports say that Mitin was eager to become the governor of the Novgorod region as far back as 2005. He was said to use all his power for that but Moscow vice-mayor Valery Shantsev stole a march on him then. Still, Mitin was put in ''immediate reserve'' and after Mikhail Prusak's retirement was delegated to the Novgorod region just as Sancho Panza was sent to Borneo island.

In 2007 Vladimir Fedorov, the director general of Splav (Alloy) corporation – one of the key nuclear, gas and military equipment producers – suggested incorporating in Rosatom (Russian Atom) state company. Mitin, in turn, hinted that company itergration could not be carried out without his mediation.

Fedorov refused and immediately got in jail. He was blamed for larceny of two buildings from the property of his own сompany. In few months he was convicted and put into prison. Splav representatives came to see Mitin by the appointment they had set up to ask him for mitigation of the sentence.  Mitin, as petitioners later claimed,  replied them plainly: Fedorov should sell him the enterprise or give him a power of attorney for corporation property management. Then, he said, Fedorov can be discharged.

Shortly after assumption of the governor position Sergey Mitin invited  the Continentalinvest holding company owned by Nikolai Makarov  to construct a pulp mill. Productivity of the plant is supposed to be 300 thousand tons.

Makarov  as well as his company were frequently mentioned in media reports. Continentalinvest  owned  notorious Baikal Pulp and Paper Plant that caused long-term lake pollution and was sought to get closed down by ecologists. Also the company was known to be spotted with raider activity.

Despite all those facts, Sergei Mitin put at risk a huge amount of money  - construction costs are about 500 bn euro. The loan was given under the sovereign guarantee, so the region government took upon the responsibility both for the project and for the investor. Thus, if something goes wrong the Novgorod region financially supported by the state as it is will pay off the money for tens of years.

Reports say that the project must have been approved at the Presidential Plenipotentiary mission in the North-West Federal District as its head Ilya Klebanov has vested interest in Continentalinvest.  Klebanov put pressure on Mitin as well.

On May 2008 media reported that Mitin surrounded by his subordinates had illegally shot from the light weapon during a sail jaunt. Fisherman Alexander Vasilyev from Seltso village became a random target, he was shot in a back. But the governor's name was not mentioned in a police report.

On August 2011 at the meeting with Novgorod veterans Mitin said: '' We will try to push out all the negative information spread by media and overwhelming TV-screens. We'll replace it with proper, good-quality films – produced in Russia ones.''

Audience, however, did not support Mitin's opinion. Novgorod veterans turned out to be concerned with issues quite different from pernicious media influence