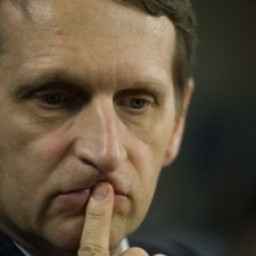 Naryshkin was born on October 27, 1954 in Leningrad. In 1978 he graduated from Leningrad Mechanical Institute (Voenmech) receiving the diploma of engineer-radio mechanic. Subsequently he received a degree in economics at St. Petersburg International Management Institute.

Since 1982 Naryshkin was assistant rector at Leningrad Polytechnical Institute (LPI) in international relations, expert at the State Committee on Science and Technology, member of staff with Economic Adviser to the Soviet Embassy in Belgium, and deputy head of the department of foreign economic relations at LPI. According to some media, Naryshkin worked for KGB and studied at the KGB Red Banner Institute in the same group with Vladimir Putin.

Since 1995 he was head of the foreign investments of Industry and Construction Bank OJSC (St. Petersburg).

Since 1997 he was head of Investment Department, deputy chairman of the Committee on Economy and Investment with the Government of Leningrad region.

Since 1998 he was chairman of the Committee on External Economic and International Relations with the Government of Leningrad region.

Since February 2004 he was deputy head of Economic Department of the Presidential Executive Office.

Since March 2004 he was Deputy Chief of Staff of the Presidential Executive Office.

Since February 2007 he was Deputy Prime Minister and Chief of Staff of the Presidential Executive Office. In September the same year he became chairman of the board of directors of the United Shipbuilding Corporation.

On May 12, 2008 he became Chief of Staff of the Presidential Executive Office.

Medal of the Order of Merit for the Fatherland, II degree (2003)

Officer of the Order of the Legion of Honour (France)

Order of Friendship of Peoples (Belarus, 2009)

His wife, Tatiana Naryshkina, in 2008 earned about 4 million rubles, becoming the first among the wives of Kremlin officials in terms of income.

The Naryshkins have two children: son Andrey is a businessman, and their daughter Veronica is a student at the Academy of National Economy under the Russian government.

In 2010, according to the tax return, Naryshkin earned almost 4.6 million rubles, while the income of his wife amounted to 1.431 million rubles

In 1988 Naryshkin was appointed to serve in Brussels a member of the staff of Economic Adviser of the USSR Embassy in Belgium. One of the diplomats, who worked in the embassy in Brussels in the late 80s, said about Naryshkin that there was nothing definite that could be said about the man, except that he "seems to have been "a neighbor ". In diplomatic slang, the word "neighbor" means a man who works for security agencies. "Near neighbours" are those from the KGB, "remote neighbours" are those from the GRU.

Judging by the fact that Naryshkin was sent to Brussels, he has a good reputation in the agency he worked for. It has always been considered most prestigious in intelligence to work in Western Europe, and especially in Brussels where the headquarters of NATO are located.

In March 2006 at a press conference in Paris Naryshkin, commenting on the progress of the criminal case against the former owner of Yukos, Mikhail Khodorkovsky, admitted that the so-called Yukos case had affected the perception of Russia by foreign investors. He also expressed hope that the case be the last of its kind

In December 2006, Naryshkin, summing up the intermediate results of the administrative reform, told the media that he considered the elimination of corruption through the introduction of stringent administrative regulations for all state employees as his main task.

In autumn 2010 it was reported about an attempt to get compensation for a large amount of VAT from the budget. Law enforcers suspected friends of Mikhail Mishustin, the head of FTS of Russi,a and FNS staff. Andrey Khorev, Deputy Head of the Department of Economic Security (DES) of the Ministry of Internal Affairs of Russia, organized pre-investigation checks so that there would be no cases initiated against firms of Mishustin. However, he failed to completely hush up the scandal, and the leadership of the Russian Interior Ministry wanted to get rid of General Khorev whose reputation was tarnished.

To resolve this conflict, Mikhail Mishustin introduced General Khorev to Sergei Naryshkin, whom he had been friends with for several years, and asked his friend to help the general. Naryshkin, while under an incredible influence of Mishustin, agreed to help.

After a conversation between Naryshkin and Interior Minister Rashid Nurgaliyev, Khorev kept his job. All these details were supposed to remain a secret, but Khorev disclosed the information and blabbed it to a few confidants, thereby letting down Sergei Naryshkin.

In December 2010 Gatchina city court arrested Aleksander Tabachkov, the former CEO and co-owner of Gatchina distillery, on charges of extortion and money laundering.

According to investigators, Tabachkov embezzled over 15 million rubles from the government. In 2008, the distillery received a target-specific loan from the Government of Leningrad region. The loan was issued for the purchase of grain for further processing. Money passed through the accounts of several firms, and Tabachkov provided Finance Committee of Leningrad region with forged documents about spending the allocated public funds.

Tabachkov was also a co-founded of Bodegas Makhas and Bodegas Vinos that trade in alcoholic beverages. After the arrest of Tabachkov, control over Bodegas Vinos was in the hands of his business partners, Michail and Yelena Yakubchik who were close relatives of Naryshkin.

Anonymous sources claimed that Tabachkov began to have troubles with law enforcement authorities just after his working relations with Yelena Yakubchik became tense. It was assumed that Naryshkin did not ask to put anyone in prison and just advised to sort things out.

Media published the words of Dmitri Vasilchuk and in particular him stating that Khorev paid Naryshkin fifty million dollars to keep his job.

In 2010 after St Petersburg newspaper Vash Tainy Sovetnik mentioned in its articles the interests of the Naryshkins in the alcohol market, it closed for the New Year vacation, but never opened again. The newspaper could not operate as usual in the paralyzing atmosphere created by a comprehensive probe into its activities by the tax service and other agencies.  The probe was launched at the end of December and was in progress all throughout January and February 2011. As a result, the newspaper was closed down.

Naryshkin not only retained his interests in the spirit drink market, but also successfully lobbied the interests of his vodka producing line through having his people appointed to the relevant committees of the federal parliament. For instance, the vodka market issue in the Duma is now supervised by Viktor Zvagelsky, the owner of one of the largest vodka distilleries in Moscow region, Naryshkin’s protégé and colleague in the spirit drink market, who now is the deputy chairman of the State Duma Committee on economic policies. It is Naryshkin who lobbied for Zvagelsky to get the position as chairman of the committee.  But he failed, as Vyacheslav Volodin, the current first deputy of the Presidential Administration head, managed to have Igor Rudensky, his political ally in the bloc Fatherland – All Russia they used to be members of, appointed to the mentioned position. However, Zvagelsky is still eager to head the committee.