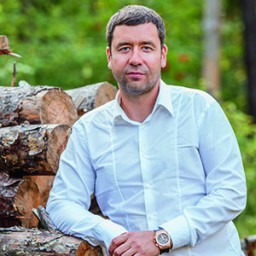 Was born in January 31, 1979 in Yuzhno-Sakhalinsk city. In 1998 he moved to Voronezh. He has two higher educations. A graduate of the Voronezh State Pedagogical University in the specialty "Teacher of Physical Education" and the Voronezh branch of the Russian State Trade and Economic University in the specialty "Economics and Management of trade companies". Winner of the "Golden Fund of Voronezh Region" of 2005 in the category "Business". Member of the Board of Trustees of the church of St. Xenia of Petersburg. Master of Sports Candidate in ski jumping.

... Winner of the "Golden Fund of Voronezh region" in the category "Business". He enjoys extreme sports. He is married and has a son.

Over the last few weeks to the Editorial Office "MOE!" come calls from perturbed Voronezh residents, who are dissatisfied with the erection of the market near the temple in the Northern Region.

- The head does not fit, haw can such a neighborhood be permissible - the reader Ekaterina Viktorovna is perplexed. - It turns out; it can be purchased meat, as well as the milk during the abstinence near the church. By the way, judging by the project, which developers hung on the fence, they also provided a café there. So, a beer will be poured in front of the church also?

... On the same day the staff of the Editorial Office "MOE" talked with the founder and the project manager of trade yard "Soborniy" Sergei Rodkin.

- When the preparatory work near the church were just beginning, we encountered a lack of understanding from the part of the parish, - said Sergey. - Then we were able to agree. We promised to equip the territory around the temple and to help with its construction.

Then "the owner effect" turned on: for the place, where you are the master, the care is different, and the attitude also - linoleum will be laid more prettier, and a fitting will be organized. And the object itself wins in the end: the market "Nevsky" - is a multiple winner of the urban competition for the most well appointed enterprise. The last two years - this is one of the best markets, although its area - is only two thousand square meters, and it didn't allow us to do what we wanted. But there are enough things we managed to do: we spent the landscaping of the surrounding yards - roads, playgrounds and entrances. We spent a lot of money to break the stereotypes: at the place where the market is - there are dirt, deception and lack of sanitation - and to consolidate the good that is in the market.

You are concerned by the private entrepreneurs of the people's market "Nevsky" in the northern area of the city of Voronezh. The market belongs to Mr. Rodkin Sergey Sergeevich!

To us, the entrepreneurs, tenants of the market “Nevsky”, were presented the official paper of the financial assistance, quote: "DEAR TENANTS! ON THE THRESHOLD OF ELECTIONS TO A STATE DUMA OF THE FEDERAL ASSEMBLY OF RUSSIAN FEDERATION WHICH WILL BE HELD IN DECEMBER 4, 2011, THE ADMINISTRATION OF VORONEZH CITY AN VORONEZH REGION APPLIED TO THE MANAGEMENT OF THE MARKET "NEVSKY" WITH A REQUEST OF MATERIAL SUPPORT OF THIS EVENT. SO, PLEASE FOR THIS HANDLING OF THE ADMINISTRATION TO PROVIDE ALL POSSIBLE ASSISTANCE TO 31.10.2011 YEAR.

... But it did not stop!!! Entrepreneurs of the market went to the reception to him: He said: You have a period to October 31, 2011 to hand over the money. Otherwise you will lose your retail space! LAWLESSNESS!!!!

United Russians of Voronezh yesterday summed up the preliminary results of the intra-party primaries, ended on the eve, for the selection of candidates for deputies of the City Duma and the regional Duma of Voronezh. Hot fight broke out only for "urban" places - at least five current status deputies suddenly lost the vote, and politicians and businessmen, well known in the region, appeared among the winners. This outcome has sparked public complaints of the losers on violations.

Another loser deputy became the businessman Sergei Kudryavtsev (№17), conceded a native of the FSS Viktor Kovalev. Among the other winners of the "new faces" are - the director of the Integral Accounting Centre of the Voronezh region Ruslan Kochetov (№5), the head of the Voronezh fund of overhaul Andrew Slesarev (territorial group №2) and the top manager of the retailer "Tsentrtorg" Rodkin Sergey (district №7).

The owner of the retail network "Tsentrtorg" Rodkin Sergey will earn serious cash in the New Year days. The Head of Business Development Department, the consumer market and innovation policies Lubov Parshina signed a document to include a businessman among the organizers of the fair on Lenin Square. He'll get 25 places through this, where he will be able to trade all sorts of goodies, from 20 to 31 December. The mayor signed the corresponding decree, explaining their decision by saying that Sergei Rodkin is included among the organizers of the Fair "in order to meet the needs of the population of Christmas products at affordable prices better, to support farmers and to prevent unauthorized trading".

It should be noted that before this attractive locations on Lenin Square were played in the competition, in which anyone could participate.

Sergey Rodkin this year participated in the primaries of the "United Russia" on elections of deputies of the City Duma. He won on the district №7, but he abandoned the race before the start of the campaign. Instead of him, an unofficially backed by the United Russia Alexei Klimov, subsequently arrested on suspicion of pimping, tried to go to the Parliament.

Voronezh Prosecutor's Office demanded the city authorities and the leadership of PAO "Quadra - "Voronezh generation" to dismantle the fair of the businessman Sergei Rodkin in the Kominternovsky district, said the prosecutor's office.

They explained that the ministry considered the collective appeals of the residents of an apartment building on Lizyukova, 85, on the placement of the fair. The prosecutor's office found that eight retail objects of Sergei Rodkin are above the thermal route of "Quadra" and within the limits of its buffer zone.

Recall, that earlier, at the press service of "Quadra" explained that such placement is dangerous for workers and visitors of outlets. Let's note that in 2014 the Arbitration Court of the Voronezh Region has ordered a shopping row, which was located on the site of the pipeline of the company "Quadra", to remove their pavilions. In early March of this year, energy workers asked the court again to demolish dangerous buildings, owned by the businessman Rodkin.

Let's note that earlier the disturbance of inhabitants was caused by the fact that for the budget bill has been organized a parking for the needs of the apartment house, and the surrounding area was also developed (and earlier pavilions of another individual entrepreneur were dismantled from this place). About 3.5 million rubles were spent on the parking in total, according to the mayor's office. However, on January 21 this year, on-site parking, as well as on the protection zone of a heating of "Quadra", appeared trading pavilions. Resolution on the allocation of the fair from the mayor's office received a businessman Sergei Rodkin, previously positioned itself in the media as a manager of the trading house "Molodezhniy", the founder of the market "Nevsky" and member of the board of directors of a large supermarket network.