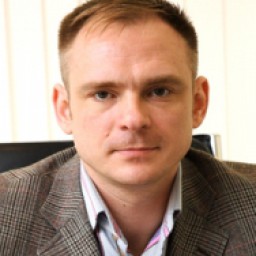 Sergey Uchitel was born in Novokuznetsk. He graduated from Kemerovo State University.

Since November 2000 he has been a managing lawyer at the Bar association Regionservice and in January 2003 he became a co-chairman of the Bar.

Currently he is an arbitrator of the Third Party Arbitration Court at the Kuzbass Chamber of Commerce and an independent legal expert of all-Russian public organizations supporting small and medium-scale businesses, namely Opora Rossii and Delovaya Rossiya. He is also an independent expert of a number of government agencies, including federal ones, and a member of the working group at the Ministry of Economic Development and Trade on the reform of the legislation on cadastral valuation of land.  Uchitel is the author of a number of articles published in specialized Russian periodicals on law, economics, and management. He serves as an expert in business publications and the media.

Lawyer Sharoyko and Sibtorg (until recently headed by Gleb Annenkov, twice convicted of robbery and drug dealing) robbed Terekhov of the former Khoztorg warehouse that united a complex of buildings, covering 3.5 hectares near Kemerovo settlements Pioner and Ishanovo. Within 4 years time Terekhov managed to save the warehouse from devastation and put the local economy on the right track, after which other entrepreneurs came to do business in that area.

Experts can say that Aleksey Terekhov’s business was one of the few places in Kuzbass where small businesses are developing. This is where new jobs are created and regional budget gets its fair share in taxes.

Regionservice lawyers know no decency. Trying to rob a regular business of another Kemerovo company, they resorted to forgery, which is qualified as a criminal offence. Such an outcome is inevitable. Any schemer, who builds their prosperity at the expense of someone else’s business is certain to become a criminal.

Who is their teacher, or, in Russian, uchitel.

Anatoly Skurov, Sibuglemet president, succeeded in his fight for control over JSC Mezhdurechye with two vice-presidents of the holding Valentin Bukhtoyarov and Vladimir Melnichenko. Kemerovo Arbitration Court restored the right for corporate control over the coal asset of the holding for Moscow LLC Transmetkoks, which was under Skurov’s control. Also, Skurov obtained 5.18% of Mezhdurechye registered capital.

Plaintiff’s representatives, Sergey Uchitel and Igor Boglachev, made a statement in court about falsification of evidence, i.e the agreement signed on 1 December 2003. That agreement terminated an assignment agreement, signed in April 2002, under which Transmetkoks received the disputable multiple asset from Melnichenko and Bukhtoyarov. The court excluded the agreement dated 1 December 2003 as evidence after Bukhtoyarov’s statement.

During the trial Uchitel insisted that Transmetkoks was trying to restore its forfeited right for corporate control over JSC Mezhdurechye, since Valentin Bukhtoyarov and Vladimir Melnichenko had not transferred the shares, despite having signed the assignment agreement. Although Transmetkoks purchased the shares from the defendant for 5.3 mln rubles, the latter still owned them.

Sergey Uchitel participated in all disputes regarding profitable enterprises in Kemerovo region. They often resulted in bloodshed.

When in 2001 Uchitel defended his clients’ interests in their fight for JSC Kuznetsky tsementny Zavod, lawyer Dmitry Smokotin, defending opponents’ interests, and Oleg Vedenin, their other representative from Moscow, were shot. Now, when some lawyer is killed in Kemerovo region, journalists who are long-term residents (those who remember about the events of 2001) turn to Uchitel for comments. The latter is reluctant to remember. Nowadays all the disputes regarding enterprise takeovers are resolved in court. So it happened in Gennady Vasiliev’s case.

Kemerovo Arbitration Court refused to satisfy the lawsuit filed by Valentin Bukhtoyarov, vice-president of the holding Sibuglemet, against LLC Transmetkoks controlled by Anatoly Skurov, Sibuglemet president. Bukhtoyarov demanded to invalidate agreement on sale and purchase of 25 % shares of JSC Obogatitelnaya fabrika Antonovskaya that is a part of Sibuglemet.

In December 2010 Bukhtoyarov, who owns a total of 2500 ordinary shares amounting to 25 % of placed shares, appealed to Kemerovo Arbitration court when he found out that 25 % of shares he bought from Transmetkoks in December 2003 were given back to the seller in accordance with the agreement signed on 25 April 2004. The agreement terminated the sale and purchase agreement due to Bukhtoyarov’s failure to pay for Antonovsky shares.

In his lawsuit Bukhtoyarov stated he had no intention to alienate the shares. Moreover, he had not signed the agreement and share transfer order dated 16 December 2009, according to which the disputable shares were transferred to Transmetkoks.

Judging by initial forensic examination, the signatures both in the agreement and the share transfer order did not belong to Bukhtoyarov. Yet Regionservice lawyers defending Transmetkoks interests managed to hold a reexamination that firmly proved that Bukhtoyarov had signed the above documents.

“Considering it was Bukhtoyarov who had to prove anything, there is not a single reliable proof, confirming his statement about not signing the agreement. Such a position enabled us to win”, Uchitel said.