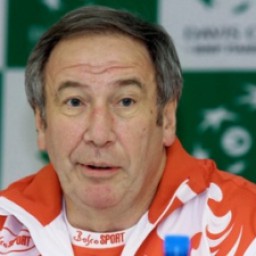 Biography:
Tarpishchev was born on 7 March, 1948 in Moscow. In 1966 he graduated from the State Central Institute of Physical Culture. Has a title of Master of Sports. He was head coach of the Dynamo Moscow City Council Voluntary Sports Society.

1974-1991  head coach of the USSR national tennis team and captain of the USSR team in the Davis Cup.

Medal  In Memory of the 1000th Anniversary of Kazan
Medal For merits in tennis (International Tennis Federation) (1988)
International order of St. Constantine the Great
Order of Peter the Great 1st Class
Order of Lomonosov
Golden Star For loyalty to Russia

Dossier:
In 1988 in Jurmala Tarpishchev got acquainted with Boris Yeltsin and soon became close to the first president of Russia. While being Yeltsin's personal coach Tarpishchev was called ''grey eminence'' behind his back.

Under Tarpishchev National Sports Foundation  received a number of customs facilities. Major of them was free import of cigarettes and spirits as well as export of strategic resources. NSF was the largest Russian importer of alcohol and tobacco. On October 1993 Tarpishchev along with tycoon Vladimir Gusinsky established NTV television channel on that money. Soon Gusinsky and Tarpishchev had a conflict since the tycoon refused to allot two hours per day for sports translations as they had agreed before.

In 1995 a scandalous record of the conversation between Boris Fyodorov, the deputy of Tarpishchev in NSF, and members of Yeltsin's campaign staff was made. Fyodorov said that Tarpischev - he called him Shama - was associated with Izmaylovo criminal gang, businessman Alimzhan Takhtakhunov (nicknamed Little Taiwanese), notorious shadow businessmen Lev and Mikhail Cherny and oil magnate Petr Yanchev. As Fyodorov claimed, Alexander Korzhakov,  the head of the Presidential Security Service, introduced Tarpishchev to Izmaylovo gangsters. Tarpishchev said that his former deputy had told lies and tried to refute accusations, but six months later he was removed from the position of the chairman of the Coordinating Committee on Physical Culture and Sports under the President of Russia and the Russian State Committee on Physical Culture and Tourism. In 1999 Fyodorov at the age of 40 died suddenly of acute heart failure under obscure circumstances.

Former deputy head of the Chamber of Accounts Yuri Boldyrev believed that the Federal Reserve fraud was one of the most flagrant law violation of the mid-nineties. Boldyrev claimed that in 1995 over $ 9 billion were gone away from the Federal budget through sports organizations due to customs non-payments. Practically all the money went through the National Sports Foundation.

Tarpishchev is blacklisted by American Visa Service for " relations with the Russian mafia." In 1996 at the Olympic Games in Atlanta he got  visa with restriction on travel: he was forbidden to travel out of the city. In 2002 at the Winter Olympic Games in Salt Lake City Tarpishchev was allowed to enter the country in a week after the Games started, so he had to miss the IOC session that preceded the Games. In summer 2007 Tarpishchev had the same problems during theU.S.-. Russia Fed Cup semifinal match in Vermont. Tarpishchev was not allowed to enter the U.S. until the last minute. In spring 2010 when accompanying women's national team Tarpishchev had visa problems as well.

On January 2011 Shamil Tarpishchev refused to sign the Ministry declaration on training arrangements for the Olympics - 2012 in London because he believed that state funding was not enough.