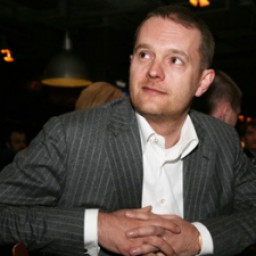 Biography
He was born on May 28, 1966 in Moscow. In 1989, he graduated from the Moscow Institute of Radio Engineering, Electronics and Automation with a degree in electrophysics. He worked as an engineer at the Moscow Institute of Shipbuilding.
In 1993, he was appointed deputy chairman of the board of the Moscow Petrochemical Bank.
In 1997-2001 - Director General of VEO-Invest JSC. After the merger of the company with BK Otkritie (a broker company) in September 2001, he headed the new united company Otkritie Brokerage House.
In 2004-2010 - General Director of Otkritie Financial Corporation JSC. From 2010 - President of this company.
He was twice named Investment Banker of the Year (2006 and 2008).
He was a sponsor of Neschastny sluchai Band (a Russian alternative rock band), financed publishing of Mikhail Zhvanetsky’s books, sponsored movie making of Chapiteau-Show with Peter Mamonov and What Men talk About.
The owner of OpenSpace Internet portal.
Source: Wikipedia


Dossier
Vadim Belyaev started his business as an intermediary in transactions on privatization. According to him, with his help, 3 hectares of land on Kutuzovsky Prospekt in Moscow were sold for only $ 120,000. He was also responsible for privatization of the Moscow oil refinery plant in Kapotnya. Only few people from those who bought it are alive now.
In the 1990s, he met with Boris Nemtsov at the tennis court. They became partners about two years after they had met. Nemtsov ended up working in government agencies, such as the State Property Committee, and took up his own real estate development business in Moscow. In particular, his first project was a building on Krasnaya Presnya where now there is the PIK Group. Since then they have been equal shareholders.
Now the Otkritie Bank's assets exceed $4 billion, and the bank is in the top 20 in Russia.
Source: Business secrets, December 5, 2011

Co-owner of Otkritie Financial Corporation Vadim Belyaev purchased an online portal on culture OpenSpace.ru.
The former owner of the portal was a former Deputy Minister of Finance of the Moscow Region Valery Nosov, who now is under arrest on charges of damaging the Moscow region budget for $ 27 billion.
Source: Gazeta, September 3, 2010

Secular columnist Bozena Rynska told in her blog that once, at the party dedicated to restarting of the supercultural portal OpenSpace, a drunken uncultured person put his hand up her skirt. It was ended with a fight, because all the men defended the bastard at the supercultural party.
“The guards agreed to make him go out immediately”, Rynska wrote. “A security guard, who worked in the wardrobe, even flushed when I told him what had happened. But they needed a sanction of the host of the party. Then I went to Vadim Belyaev, who had bought the portal OpenSpace, as I understand it. Vadim was well familiar to me, he even called me and asked something about the flea markets and invited for dinner. And I said, “Vadim, if a drunken bastard had groped your wife or your daughter putting his hand there, you would have thought that everything was OK and that he was just drunk? Or would you knock him down?” Vadim began trying to get out and said something like, “Well, if My daughter ...”
Source: STRINGER.Ru, October 3, 2010


The private bank Bordier & Cie, founded in 1844, is one of the oldest in Switzerland. In 2011, three new customers from Russia came there and they were very hospitably received. “Mr. George Urumov had planned to open a bank account in Bordier Bank long ago, but he hadn’t found time for this before he came to Switzerland”, a bank manager said in the accompanying document when opening the customer account. The private bank in Geneva well met his business partners, Ruslan Pinaev and Sergey Kondratyuk from London Company Otkritie Securities LTD (OSL), a branch of Otkritie Financial Corporation, as well.
In March 2011, they transferred to the account of Bordier & Cie $ 120 million. A part of this amount was spent for a few days, and clients expressed a desire to withdraw the remaining $ 109 million in cash, in denominations of $ 100. On March 21, the first tranche of $ 60 million was taken to the cash desk.
Then the money, “taken” from the account of the three Russians, was divided by the sum of $ 20 million and put into accounts of false companies of each of them.

Because of all the customers had $ 109 million in the bank, two days later a similar operation was carried out with the remaining $ 49 million, which were divided equally by $ 16.3 million.
After that, the paths of the three Russian lain apart. On November 21, 2011, the former managing director of OSL Sergey Kondratyuk was arrested at Zurich airport at the request of the prosecutor's office of Geneva and spent two months in custody in Switzerland on suspicion of fraud and money laundering. A few days later, in London, George Urumov was arrested and then released on his own recognizance. Meanwhile, Ruslan Pinaev, searched by Russian and British law enforcement bodies, is on the run.
The $ 120 million, which had been in Geneva, in reality, were the result of a complex fraudulent scheme, about which the Otkritie Financial Corporation and its London-based Otkritie International Investment Management Otkritie Securities LTD, where the three Russian traders had worked, sent the lawsuit in the London court. It claims to exact $ 183 million from George Urumov  for misappropriation of the bonuses directed to his subordinates, as well as for unauthorized transactions with debt obligations of Argentina. Urumov completely rejects all charges in his address. He filed a lawsuit against his former employer for unlawful dismissal.
Source: Nasha Gazeta, Switzerland, September 5, 2012


The High Court of London decided to return the real estate, cash and other assets for the sum of $ 28 million to Otkritie Corporation. They belonged to the Panamanian company FO Firmly Oceans, Qast International from the British Virgin Islands and Natalia Demakova, Sergey Kondratyuk;s sister. One of the participants of the proceedings says that there is a villa in Spain, a Bentley, Continental, and Ferrari cars among the assets. Kondratyuk couldn’t be reached for comment yesterday, he detained in Switzerland on suspicion of fraud and money laundering, the Otkritie says.
Earlier, it was stated in the Otkritie that they were able to return the house in London and $ 34 million of these assets. They belonged to Panamanian Dunant International, which worked for George Urumov. The Otkritie consider him the main organizer of the scheme of the theft of funds from the company.
Source: Bloomberg, July 17, 2012