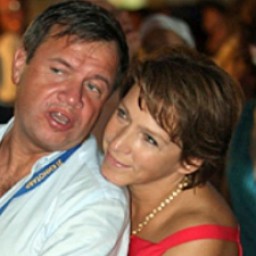 Valentin Yumashev was born on 15 December 1957 in Perm. Yumashev studied at the faculty of journalism of Moscow State University, but later he was dismissed.
Since 1976, he worked as a courier in Komsomolskaya Pravda newspaper, and then he works as an intern in Moskovsky Komsomolets newspaper.

At the present time, he is engaged in real estate development business, owns a half of Imperia Tower in Moscow- City and almost 50% of the business-center’s management company City Ltd. (49.58% shares).

Yumashev also has been seen in lobbying the interests of contemporary Russian oligarchy and the various right-wing political forces.

According to some political analysts and mass media, he was one of the initiators and ideologists of the arrival of billionaire Mikhail Prokhorov to big-time politics through the leadership of Right Cause party. It is believed that this political project was actually the next commercial business project for Valentin Yumashev.

From his first marriage with Irina Vedeneyeva, he has a daughter Polina, who married Oleg Deripaska in 2001. His next (common-law) wife was Svetlana Vavra. Then he got married the second time to Tatyana Dyachenko, a daughter of Boris Yeltsin. Yumashev and Tatyana Dyachenko’ s  daughter Maria was born in April 2002.

Dossier
Until now no one can say exactly who brought Valentin Yumashev to Yeltsin. Most likely, it was Roman Murashkovsky, who served as presidential media adviser at the time. Murashkovsky supposedly told that the journalist Yumashev was a friendly guy, with no political opinions, he sang songs with a guitar and could be useful.

Yumashev looked then as a moderate hippie: greasy torn jeans, a shapeless sweater with sleeves rolled up, unwashed hair, the face covered with pimples.

His first book, "The Confessions on the Given Topic," Yeltsin went to write together with Yumashev to Kirov region.

For a week and a half, they were lying in the hay with a dictaphone or walking slowly in the woods, and Yeltsin himself was dictating to Yumashev all the text.

After the book had been published, no one wondered who Yumashev was and what he handled.

Yumashev lead away Svetlana Varva from her husband, journalist Andrey Vavra. But the friendship between two men was not ruined. On the contrary, under Yumashev’s patronage, the abandoned spouse received a prominent position in the presidential administration. In addition, he combined his new job with walking the dog of his ex-wife and her lover ... After a while, Valentin Yumashev and Svetlana Vavra’s civil marriage was ended. But they stayed in business relations again. At the height of their romance, Yumashev gave Svetlana a press club in one of Arbat lanes. For quite a long time, this firm was being used by Yeltsin family for propaganda attacks against the St. Petersburg clan.

From Moscow GUVD (Department of Internal Affairs) report, classified as "not to print", 27 February 1994: "At 11.35, on the intersection of Vernadsky Ave with University Ave, 3rd Secretary of North Korea Embassy Kahn Dean Hwang, born 1945, driving Mercedes-200 D-087-023, owned by the Embassy, ran the forbidding signal of the traffic light  and collided with Jeep Grand Cherokee M-AR77-243 which was being driven by its owner, Yumashev V B, born in 1957,  registered at Autumn Street, 4-2-2.

As a result of the collision, those who were in Mercedes 200:

- an unidentified man, who looked about 45 years, the identity is being established - died from injuries received on the spot, the corpse was delivered to the morgue-1;

- an unidentified man, who looked about 30 years, the identity was being established - with multiple broken ribs, brain injury, shock of the 3rd degree, was taken to the 64th Municipal Hospital for the provision of medical care, where he died at 14.30.

Verification of the stop”

Alexander Korzhakov recalled: "Yeltsin's second book “Zapiski Presidenta” (Notes of the President) was completed in early 1994. Yumashev said that a lot of money was needed for its publication. As it turned out, several major Russian publishing houses were ready to publish the “Zapiski Presidenta” at their own expense, and even to pay Yeltsin substantial royalties. But Yumashev presented the situation with the publication of the book in such a way that its issue, as he assured, could not be possible without the money of a businessman.

The businessman was Boris Berezovsky. Berezovsky and Yumashev, as it turned out later, had already been linked with doubtful commercial projects. “Have you noticed that the whole of Moscow has LogoVAZ advertising hanging all around the place?” - Yumashev asked me. - So: LogoVAZ is Berezovsky.” During the whole 1993, LogoVAZ was advertising in the popular and needy in money Ogonyok, where Yumashev was deputy editor. Thus Berezovsky financed the early career of Yumashev. Two years later, after the reorganization of Ogonyok, Yumashev became CEO of the magazine, and Berezovsky - its co-owne.

It was Yumashev who got involved Tatiana Dyachenko, who was far from politics, into working in the campaign headquarters. He had to be genius to persuade Tatiana herself. Then he had to persuade her mother. After that he moved to persuade her father. Gradually, the President himself began to listen out for the information received from the analytical group. For a while he began to look at them harder. Afterwards, the group became known as the campaign headquarters.

Already after the resignation, hastily leaving the office of the Head of the Presidential Administration, Yumashev had forgotten some papers in the safe which were, apparently, of no importance to him. There was Tatyana Dyachenko’s dossier among them:

“… when giving her (Dyachenko) information, it is necessary to remember  that she is absolutely dependent and fully controlled by her father. Tatyana immediately begins to interfere with Boris Nikolaevich (Eltsin – ed.) and make “independent” acts which need to be “accurately” advised to her and to keep her feeling permanently offended by her father”.

“Tatyana Borisovna is very imperious and self-seeking… She has inherited the heavy nature of the father and got accustomed to bossing men. This complex is necessary to use in the influence area”.

Yumashev himself was mentioned very briefly in this multipage paper - as a strong man.

In 2001, Tatyana Dyachenko got married for the third time – to Valentin Yumashev. She gave birth to their daughter Maria. According to some reports, after the wedding, Yumashev presented Ogonek magazine to his wife. She published it till 2003 and then she sold it.

As long ago as in 2004, Valentin Yumashev  purchased Maliy Afanasyevsky 7 business-center from the UralSib corporation, as the sources close to CITY JSC and UralSib said (49,58% belong to Yumashev’ structures). Now the owner of the building is Valtania Holdings Cyprus offshore. The name of this offshores is derived from “Valya plus Tanya” – Yumashev’s and Dyachenko’s names. According to SPARC, the Valtania Holdings Limited's representative office has been registered at the address of Maliy Afanasyevsky, 7.

Valtania Holdings also represents Yumashev’s interests in CITY company, which manages Moscow City business center and owns 50% of Fleyner CITY JSC, the owner of Imperia Tower in Moscow-City (the developer is MosCityGroup of Pavel Fuchs). City company acts as the technical customer of the roads, power grids and communications construction, conducted at the expense of city budget.

The sector number 20 is considered to be the main asset of CITY company.  The company is building a hotel and apartments of 180,000 sq. m there.

The Russian Valtania Holdings Limited's representative office is headed by Oleg Grankin, who is also chairman of CITY Board of Directors, he is also the owner of GDO CITY. Grankin is married to Yumashev’s sister and is registered the sole owner of Valtania company.