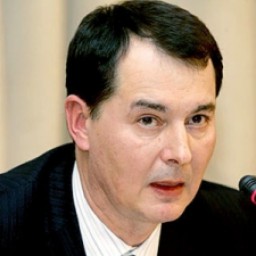 Valery Okulov was born on April 22, 1952 in the city of Kirov. In 1975 Okulov graduated from Navigation Department of Civil Aviation Academy in Leningrad with a degree of engineer-navigator.

From 1975 to 1985 he worked as navigator of An-24, An-12 and Tu-154 airplanes in Sverdlovsk united squadron at the Ural Civil Aviation Department.

On July 18, 1996 he became First Deputy CEO of Aeroflot - Russian International Airlines JSC and was in charge of the organization and management of production processes.

In 1997-2009 he was CEO and board member of the Aeroflot-Russian International Airlines JSC.

On April 3, 2009 Okulov was appointed Deputy Minister of Transport on the order of Prime Minister Vladimir Putin.

He is member of the board of directors of ASTC named after Tupolev. He is a 1st class expert and member of the managing board of the International Air Transport Association. He officially owns 0.0025% of shares of Aeroflot.

His wife Yelena is the daughter of the first Russian President Boris Yeltsin and Naina Yeltsina.

In April 1985 Boris Yeltsin, Okulov’s father-in-law, moved to Moscow from Sverdlovsk. After that Okulov became the senior navigator-instructor at the central office of Aeroflot. Eleven years later he became first deputy general director, and in February 1997 was appointed head of Aeroflot.

Okulov became head of Aeroflot in 1997 when Boris Berezovsky vacated the seat of the head of the board for his henchman Nikolai Glushkov. Freeing the position for Glushkov, Berezovsky had a whole combination to promote Marshal Yevgeny Shaposhnikov from working at Aeroflot to becoming a presidential adviser. But the president’s son-in-law enjoyed the support of Yeltsin and thus was able to fill the position prepared by Berezovsky for a completely different person. In fact, Okulov ditched the oligarch.

In 2009 Igor Levitin, the Transport Minister, said that he offered Valery Okulov, the permanent head of Aeroflot - Russian Airlines, the position of Deputy Minister of Transport.

As political analyst Stanislav Belkovsky aptly pointed out, the attack on Valery Okulov began since the day when the first Russian president Boris Yeltsin, his father-in- law, perished. There were repeated attempts to accuse Okulov of carelessness regarding prevention of drunken flying by crews, of violation of the norms of worload, and, even, almost in all the air incidents.

In 2011 the media reported that the Transport Ministry "forgot" to include in the consolidated income statement assets of the Deputy Minister Valery Okulov. After the error was fixed, Okulov’s income was stated at 15.7 million rubles.