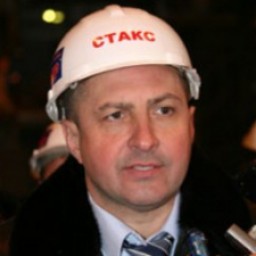 Makushin was born on May 7,  1965,  in the village Nikitovka of Belgorod region. He was a full-time, and then a doctorate student at the  Moscow Institute of Steel and Alloys (MISiS).  He defended his Ph.D thesis in metallurgic engineering in 1994.

Since 1992 he has been the Head of MAIR industrial group.

His hobbies are sport and historical literature.

According to the Moscow and Moscow region Chief Directorate of Internal Affairs, in 1984, Viktor Makushin was arraigned on a criminal charge with physical damage. He seemed to escape imprisonment because of juvenile age, but until 1984 he had been registered delinquent. Many years on, grown up and wiser Makushin was entitled as  Person of the year’, received the honorary diploma for Developing and Introduction of the Unique Technology of Buisiness Management at MAIR group`s plants’.

By 2000, Georgievskiy Valve Plant was driven to bankruptcy and purchased cheaply by Makushin, and in 2001, it was incorporated in the Moscow industrial group MAIR as JSC Arzil. Until January 2008, Makushin had shown little interest in Arzil. He was said to be scared by the criminal case filed by the Georgievsk Prosecutor`s office, which had found multiple violations in the plant`s bankruptcy procedure. However, for some unknown reason, the file has gone into nonexistence, the names of those involved in that dubious affair have been left without spot, and the new owners and top managers remain  respectable and very wealthy people.

Nevertheless, in the end of 2007, Makushin faced the very settling moment when he could freely and safely invest in the plant to increase its capacities and unique output. He approached the local branch of Sberbank of Russia to receive financial support. Having obtained gigantic loans from different banks and financial organizations, Makushin voluntarily made the plant bankrupt, shutdown it, and went into prolonged legal proceedings. Then he filed a bankruptcy petition for Arzil to the arbitrary court. Yet, at the time of his applying to court, only the Georgievsk Revenue Administration and the agencies, controlled by Makushin himself, had any claims to the enterprise.

In 2010, the billionaire Viktor Makushin lost almost all his assets and had to leave the country. The downfall of his enterprise, multi-industry MAIR group, had started with Sberbank loan, followed by law enforcment authorities pressing and filing criminal cases. As a result, Makushin gave most of his companies` shares to Sberbank.

The MAIR group`s story is a standard scheme. First, the debtor company is promptly paying the loan, then problems arise suddenly and the creditor turns faulty, eventually replacing the owner. Along these lines Sberbank has taken a number of other large enterprises.

Another Middle Ural factory seems to go bankrupt. Verkhnesinyachihinsky Metallurgical Plant (VSMZ) is being prepared to shutdown. According to the media, a winding-up committee has been set up for VSMZ; the plant`s directorate is to make a bankruptcy petition to the arbitrary court.

According to the Mining and Smelting Trade Union of the Sverdlov region, VSMZ`s assets are registered to the Cypriot offshore, which granted trust to some Moscow investor. At this time the VSMZ directorate is unavailable. It turns out that phone is cut off for debt, as well as electricity. However, all VSMZ executives have been fired several months ago.

According to our information, by Cypriot offshore is meant MAIR group, the current or former owner of VSMZ.  MAIR group`s is chaired by the entrepreneur Viktor Makushin, and its purchasing of VSMZ goes back to the period from 1998 to 2002. It is known that in 2011, the government of the Russian Federation requested the extradition of Makushin from Cyprus, but in September, the Cyprian court in the city of Limassol denied the request.