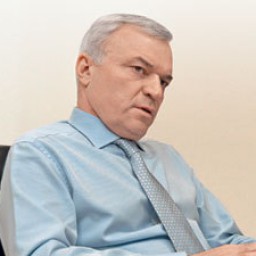 Rashnikov Viktor Filippovich born October 13, 1948 in Magnitogorsk in the Chelyabinsk region. In 1974 he graduated from the Magnitogorsk Mining and Metallurgical Institute, specializing in "Metal Forming"; in 1994, he received a second degree in "Organization of production management".

He began his career at the Magnitogorsk Metallurgical Combine (“MMK”) in 1967 as a mechanic of the repairs shop of metallurgical equipment. He worked as an operator, foreman, master, shift manager, head of a shop, head of production and supply of products.

In 1991 he was appointed chief engineer and first deputy general director of MMK.

In August 1993, he became one of the founders of AOZT "Investment Company" Inreko "(supply and marketing activities).

On March 13, 1998 he was elected to the Board of Directors of OAO “Central Company FIG "Magnitogorsk steel".

In 2000, Rashnikov was confidant of Vladimir Putin in presidential elections;

From June 2002 - Member of the Board of Directors of JSCB "Rosbank". In the Duma elections in 2003 he entered the federal list of "Unity and Fatherland - United Russia". On December 7, 2003 yt was elected, but refused to mandate.

From April 2005 - Chairman of the Board of Directors. Since 2006 - President of OOO "MMK Managing Company".

He takes great interes in mountain and water skiing, hockey. Vladimir Putin prefers skiing in recreation facility of "MMK" in the Chelyabinsk region.

Viktor Rashnikov appeared in the center of a scandal when the Internet site "Magnetic Claw" published materials that the combine's work was dependent to the system of 39 intermediary firms, created with the participation of Victor Rashnikova and his deputies - export prices for commodities in those companies had been artificially undercut and the difference between the actual price and the contract one got settled at Rashnikov. The founders of the firms was either Rashnikov himself, or his deputies. For example, the founder of the firm "Tehnostila" was deputy director Anatoly Zabolotny, the firm "Kanares" belonged to Rashnikov personally. In order to manipulate the railway fares and gate prices for metal, he also used offshore company "TEK and TRANZIT AG". Rashnikov and his colleagues organized the delivery of coal to the plant at a higher cost - through intermediary firms from the Kuzbass. Theft and laundering of the funds was made through the Moscow banks and representative offices of foreign firms, including OOO "Magistral". Rashnikov and the son of the mayor of Magnitogorsk Victor Anikushin were the founders of "Kubanka", through which the funds of department stores chain OAO "Class" had been transferred - part of the monthly salary of the combine workers Rashnikov gave with cards for redeeming at the stores of the chain.
Source: www.compromat.ru

Victor Rashnikov's name was associated with a scandal in 1997 when he and his childhood friend Chairman of the Board of Directors of the MMK Rashid Sharipov removed the director of the MMK - Anatoly Starikov. Sharipov, as head of FIG "Magnitogorsk Steel" (Starikov created it as a holding company structure, controlling shares of Magnitogorsk Iron and Magnitka) then owned 30% of the shares of the MMK and wanted to gain complete control over the enterprise, on that purpose the removal of Starikov was necessary. Soon there was a favorable situation for Sharipov: the old man tried to take credit at the European Bank for Reconstruction and Development for the strategic development of the MMK. Sharipov, Rashnikov and AB "Inkombank" submitted the situation in a disadvantageous way to shareholders, they accused Starikov of violating interests of the plant and made him removed. The new general director of "Magnitogorsk Metallurgical Combine" became Viktor Rashnikov.
Sources: Kommersant # 172 (3256) on 14.09.2005, www.pravda.ru from 21.07.2002

In the late 90's the entire stake in MMC was divided among several owners: the state, the administration of the enterprise, FIG "Magnitogorsk Steel", some industry enterprises and workers. Subsequently, the shares were bought from the enterprise's employees at cheaper prices. Front companies were engaged in buying up; they had been established by leadership of the MMK, in particular by Rashnikov; and its authorized capital had been paid by shares of the MMK. Rashnikov tried to capture 30% shares in FIG "Magnitogorsk steel". He was supported by the Minister of Industry and Energy Viktor Khristenko, who was then a vice-governor on economy of the Chelyabinsk region, he virtually controlled the state stake in MMK (23%) on behalf of the state and covered the frauds committed by the management of the MMK. In order to gain the remaining 30% stake in the FIG, Rashnikov and management of the MMK created a bad construction plan of "Mill-2000" in the MMK . Khristenko lobbied the credit taking for constructions from the European Bank of Reconstruction and Development. The loan caused a split between chairman of the Board of Directors of the MMK, Sharipov and CEO of the FIG- Victor Rashnikov who was CEO of the MMK. Sharipov opposed to enslaving loan, the collateral for it was 30% stake in the FIG. Sharipov realized it was impossible to repay and thus he wrote off the shares of the MMK in favor of the companies controlled by businessman Iskander Makhmudov. Rashnikov ruled the transaction null and void through the court — he had been assisted by the prosecutor of the Chelyabinsk region Anatol Bragin. Sharipov was prosecuted on charges of fraud. Later, the nominal holder of 30% stake in FPG became the company "A Capital".
Sources: www.compromat.ru, "Vedomosti 27.03.2007

In May 2002, Rashnikov tried to hold amendments to rge combine chapter through the Board of Directors in order to reinforce positions of the MMK leadership. The amendments provided an additional issue of shares and possibility of the preferred shares conversation into the voting. However, the State and the Southern Kuzbass, which shares in the the MMK could be diluted as a result of this additional issue, joined their voices and blocked the initiative of Rashnikov.
Source: www.ko.ru

In August 2002, OAO "Magnitogorsk Metallurgical Combine" issued consolidated financial statements according to the international standards. As declared in the paper, some members of the family of Victor Rashnikova had a serious financial interest in ZAO "Profit" which provided 85% of scrappage supply to the plant. In 2001 alone the plant purchased scrappage for 63 million dollars from "Profit" .
Source: Vedomosti 06.08.2002

Rashnikov stayed in the headlines in 2005 when an auction had been held on the sale of a state stake in the MMK. The management of the MMK participated at the auction along with Steel Group "Mechel", which owned about 17% stake in MMK, Novolipetsk Steel, etc. As a result, the auction of the state-owned shares in the combine was won by U.F.G.I.S. Structured Holdings, which bought the stake at a starting price of 790 million dollars, while another company of the group UFG - UFGIS Trading Ltd bought up the stake of "Mechel" for 780 million dollars. Another $ 90 million "Mechel" received as compensation for the waiver of any claims to the management and shareholders of Magnitka. The companies - buyers of the state-owned stake acted in the interests of Rashnikov.
Source: Vedomosti 09.02.2005

Rashnikov's name appeared in the press in early 2007, when the reporting data of FFMS had been published . Based on the documents it was found out that Rashnikov and key managers had no shares of the MMK. In October 2006, 20.71% shares of the MMK was in trust of "Settlement and Funds Centre; 42.27% - in trust of OOO "Mecom", 33.93% - of UFG Structured Holdings Ltd. The reports provided to the Federal Financial Markets Service stated that in 2002 the company Steelnet Investment Management SA became a shareholder of ZAO "A-Capital", which in April 2003 was the owner of 22,30% shares of the MMK. At the time Andrey Morozov, vice-president of the company that managed the MMK appeared to be among the main partners of Rashnikov.
Source: Vedomosti # 16 (1790) on 31.01.2007

In 2007 the MMK was in the sphere of interests of Rosoboronexport. Rosoboronexport was planning to build a holding of special steels and the MMK had to pass under the control of ZAO "RusSpetsStal". The public-private partnership was proposed as a form of interaction. But the MMK had a strong lobby on behalf of Industry and Energy Minister Viktor Khristenko, so he was able to abandon the proposal to enter into the public-private partnership with RusSpetsStal. With Khristenko's assistance Rashnikov managed to evade the deals with “Gazmetall" by Alisher Usmanov and with "Evrazgrupp".
Source: www.newsru.com on August 23, 2007

Rashnikov along with Alexei Mordashov ("Severstal") lobbied amendments to the Tax Code, on which the implementation of scrappage became a subject to VAT. The collectors of scrappage turned out to be the failed side, in particular, the biggest company-collector "MAIR" of Victor Makushin. In the Duma Rashnikov's interest was supported by Deputy Pavel Krasheninnikov.
Source: newspaper "version" from 21.01.2008

Rashnikov's name appeared in the press once again, when retirees and veterans of the MMK took to the streets of Magnitogorsk with placards and accusations of fraud against Rashnikov. They appealed to the law enforcement agencies to initiate a criminal case, as at the end of the 90's Rashnikov made workers of the MMK transfer their shares in trust of the company "Mekom”, and in 2003 the workers were told that their shares had been sold. According to the statements of aged people, their signatures on the transfer documents had been forged.
Source: "Stringer" from 18.06.2008

Victor Rashnikov is ranked among the partners on investment projects of the owner of "ST Development" by Shalva Chigirinsky. Journalists predicted financial losses to Rashnikov in connection with his investments in the reconstruction of the hotel "Russia", which was held by Chigirinsky. In 2008,the Supreme Court made a ruling invalidating the investment contract of OOO “ST Development" on the hotel reconstruction; then they immediately started talking about the fact that the losses incurred by Chigirinsky would impact on his relations with investors. In particular, they rumored that for Rashnikov the connection with Chigirinsky could turn into reputational and financial losses.
Source: RIA "New Region" from 22.08.2008