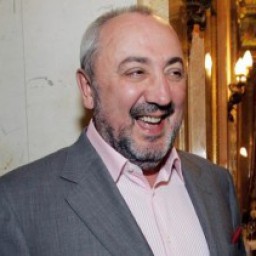 Born in June 2, 1954. He graduated from the Faculty of Economics of the Irkutsk Institute of National Economy in 1975. He worked in senior positions in the system of capital construction;

1980-1989 - the head of one of the largest self-supporting units Irkutsk DSC - control of production and technological equipment, then deputy chief of the Irkutsk DSC, deputy manager of the Irkutsk trust of panel construction and Deputy Chief of Glavyakutstroy of Minvostokstroy of USSR;

1992 - President of СJSC "Rosinvestneft"; he is the founder and leader of a number of other enterprises: LLP "Company" Rosinvestnefteprodukt ", CJSC "Centrinvestservis", OJSC "Baikal Intourist", OJSC MFPK "New City"; in the holding "ST Group" he is the managing partner and a member of the Government Committee on CIS Affairs (1997);

In June 2000 he was elected as a chairman of the board of the Angarsk Petrochemical Company; President, Chairman of the Board of Directors of OJSC "Rosinvestneft"; member of the board of the RSPP; Married, he has two sons. During the implementation of the investment program of the holding "New Town", led by V. Mashitsky, 12 buildings of extra-class total of 60 thousand square meters were built in Moscow in 1991-1997.

In 1999 "Rinko Holding" , created by Vitaly Mashitsky on the basis of "Rosinvestneft", took from SIDANCO 50.3% of OJSC "Angarsk petrochemical company" (APCC) for the debts, which owned 8.5% of shares of "RUSIA Petroleum" (holds the license one of the largest in Russia Kovykta gas condensate field) and a controlling stake in the Khabarovsk refinery. After a year or two APCC was sold to Yukos (now petrochemical company is owned by "Rosneft"), the group "Alliance" of family Bazhaev bought the refinery and the share in "RUSIA Petroleum" - TNK.

He is married and has two children (Paul and Leonid)

Company "RINKO" grew out of Irkutsk Timber Company. In 1989, 35-year-old native of the system of capital construction Vitaly Mashitsky created a Russian-British joint venture "Sibmix International" in Irkutsk on the harvesting of round wood. The company operated quite successfully." For a short time Mashitsky even formed joint projects with the presidential administration, in particular, together with the enterprise on the supplying of products to the Presidential Affairs Management was established a company "Tsentrinvestservis. Unfortunately, we could not figure out the nature of its business. Currently, the share of Mashitsky in this company is represented by three offshore companies, which are also among the founders of RINKO. In total, RINKO has five shareholders, and all are registered in offshore zones - however, Mr. Mashitsky doesn't not hide the fact that, regardless of formal names of the founders, the control of the company is wholly owned by him.

That time the idea of buying "Irkutskenergo" began to appear in some hot heads. Fortunately, then there was opportunities to amass a very good capital easily. So among the applicants of the state-owned shares of "Irkutskenergo" in 1995 appeared Vitaly Mashitsky. Then his company "Rosinvestneft" was specializing in supplying raw materials to the Angarsk plant.

"Mashitsky then earned a lot of money on accounts of receivable APCC, - says Yuri Faleichik -. And it is not strange. Then more than 20 people had the right to sign financial documents at the combine. So there was a contract, heavy for "Angarka" and very profitable for Mashitsky. His company received the right to recover the huge fines for non-existent delay in the payment of oil. The text was written that if there is debt, the interest is blanked first and then the body of the debt.

The Prosecutor's Office of Trento in April 2004 issued a warrant for the arrest of former general director of "Rosvoruzhenie" Yevgeny Ananiev and his ex-wife Olga Beļcova. Ananiev was accused of receiving bribes in 1998 at the amount of $ 18 million - at the sale for $ 117 million of three fighter aircrafts MiG-29 to Peru. $ 5 million he transferred through Swiss banks on a joint account with Beļcova in Italy. As yesterday told RIA "News" the prosecutor of Trento Stefano Dragone (in Italian, his name means "dragon" and at the same time - "well done"), he and his ex-wife appear in the list of the owners of accounts, where the commission from the contracts were transferred, concluded by Mercata with the manager of the president. Besides them in this list is the daughter of Borodin Ekaterina Siletskaya, US citizen Viktor Bondarenko with his wife Ravida, citizens of Russia Andrei Nerodenko with his wife Margaret and Milena Novotorzhkina, Israeli citizen Vitaly Mashitsky, Swiss lawyer Gregory Connor. The prosecutor's office issued a warrant for the arrest of all these individuals, except Beļcova. According to Dragone, Ananiev laundered $ 2.7 million of allocated for the reconstruction of the Kremlin, and Siletskaya - more than $ 5 million. A former employee of "Rosoboronexport" expressed a surprise that Ananiev was associated with Borodin's daughter. "He was placed to the "Rosvooruzhenie" not by someone from the inner circle [former President Boris] Yeltsin and he was never associated with Borodin in the company."

Many inhabitants of Akulinino are addicted to hunting. In January 2012, Sergei Yastrzhembsky, Sergei Chemezov, Vladimir Artjakov, Igor Zavyalov, Sergei Lisowski and Ruben Vardanyan created a non-profit partnership to promote the development of the protected area "Four Seasons" (according to SPARK) - a kind of club, bringing together fans of hunting and tourism.

Early Member of Akulinino Yastrzhembsky - is an avid trophy hunter, member of Safari Club International, is one of the awardees for the extraction of "Big African Five" (elephant, rhino, buffalo, lion and leopard). Chemezov was fond of sports shooting yet in the period of work in Germany, and then switched to hunting. Lisowski on his personal website posted pictures, including a wounded deer and wild boar. Neither the members of the partnership, nor its director did not want to communicate with "Vedomosti".

Among the founders of the "Four Seasons" are also listed the founder of the clinic "Mother and Child" Mark Kurtser, CSKA president Yevgeny Giner and businessman Vitaly Mashitsky. Akulinino Residents say that these businessmen also have areas in the village - close to the rest of the hunters. But "Vedomosti" could not find data about this in Rosreestr. Kurtser and Giner and did not respond to questions "Vedomosti" and it failed to contact Mashitsky.

It should be noted that Vitali Mashitsky - is a native of Irkutsk region. And as reported by sources of Irkutsk, today he has a considerable influence on local politics, including the regional governor Sergei Eroschenko in person. In the past, oil miner, earning millions of dollars on the black gold, Mashitsky was also engaged in metals, and was collaborated with "Gazprom". Today, most of his projects are based on cooperation with "Rostec".

As Mashitsky confessed himself, they are friends with Sergei Chemezov since childhood. It turns out that a serious person represents the jade of Buryatia as a state matter, although the proportion of Rostec is only 25 percent. Hence the conclusion: individuals hide behind Mr. Gevorkyan and CJSC "Granite".

Summing up, we can say with certainty that the Buryat jade - is no longer a state affair. "Russian Technologies" - is just a name. Jade re-division is completed, and in whose favor - is unknown again.