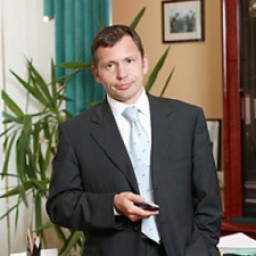 Born in 1969 in Khabarovsk. He graduated from Leningrad Higher Military topographic College.
In 1993 he retired from the Armed Forces
1995 CEO of the company "Vals" on refining oil at the Moscow and Ryazan oil refineries
1997 Deputy General Director of Vnukovo airport on investpolicy
2002 CEO of the international airport "Vnukovo"
2005 Chairman of the Board of Directors of the airport "Vnukovo"
Source: vedomosti.ru

Vantsev with his father, Anatoly was the co-owner of Aviation-Oil Company (AOC), which in fact controlled the entire business of Vnukovo airport, despite the fact that before November 2003 the majority of shares of Vnukovo Airport Plc. was owned by the Federal Agency for State Property Management. Well, the official control of Vantsev was not stated. "Vnukovo-Invest" Plc. and a part of “Vnukovo International Airport” JSC owned “AOC” company, as well as some other companies connected with air transportation.
In April 2002, Moscow Mayor Yury Luzhkov offered Vladimir Putin to transfer the shares of Vnukovo in repayment of Moscow debts. Soon a corresponding decree was signed. Initially, it had been planned to reallocate shares of the airport and transfer into a management of one structure. This was not done, however “Vnukovo Airport” Plc. was chosen as a coordinator and a management company of a project of the airport complex modernization.
Source: "Kommersant-Vlast" from 30.01.2002

At the end of 2008 "Domodedovo Airport Commercial Agency” (DACA) СJSC sued for the debts of airline AiRUnion, where Vantsev was the head of the operational headquarters for traffic management, the structures of “Vnukovo” airport, which acted as a guarantor for a number of obligations of companies "Kraysair", “Domodedovo Airlines” and “Samara”. Vantsev argued that for all the contracts which had appeared during the period from 4 to 7 September 2008, at the time of relocation of transporters from Domodedovo to Vnukovo, were paid off by the company.
Source: Kommersant № 233 (4050) from 20.12.2008

In August 2008, Domodedovo Airport refused to serve Moscow flights of AirUnion due to the debts of its member companies. To avoid a crisis and thousands of untransferred passengers it was decided to transfer AirUnion flights from Domodedovo to Vnukovo, in return for guarantees on debts of AirUnion for service at Domodedovo by Vnukovo airport.
Source: Prime-TASS from 22.06.2010

In 2008, the airline “Kraysair”, a member of the alliance AiRUnion came under distress. Court enforcement officers received 40 writs according to arbitral courts awards on debts to the tax authorities and legal entities. Without waiting for the outcome of the bankruptcy process of "Kraysair”, officers began an inventory of the company property of the first stage: real estate, desks, telephones and computers. The aircrafts were seized. But the company continued to carry passengers on the planes which were in the lease.
In addition, the claim of bankruptcy of "Kraysair” was filed by a leasing company “Ilyushin Finance”. And the head of the trading house “TOAP”, the largest AiRUnion lender, Evgeny Ostrovsky, said that TOAP filed a dozens of lawsuits to alliance airlines for the delivered fuel.
Source: Kommersant (Novosibirsk) № 181 (3998) from 07.10.2008

In December 2008, Vantsev became the largest owner of the airline SkyExpress, with low-cost air transport service, receiving 39% of the shares. The founders of this company were the brothers Boris and Alexander Abramovich. On the basis of their bankrupt assets in the form air alliance AiRUnion the company "Russian Airlines" was created, the head of which Vantsev became. However he decided not to include SkyExpress in its structure, making the company his personal project. Later Vantsev consolidated 75% stake of the company.
Source: Kommersant № 220 (4037) from 03.12.2008

In March 2009, Vantsev suggested that the Government of Moscow should buy 75% minus one share of Sky Express for one ruble. There were talks that in such a way a businessman was trying to receive guarantees of his investments in a company which had large debts. Vantsev would have beneficted from merging with a Moscow company "Atlant-Soyuz”, which was supposed to enter into “Rosavia" - a company that was being created by “Rostekhnologii” and the Government of Moscow. “Rosavia" by that time was also headed by Vantsev.
Source: Kommersant № 45 / P (4100) from 16.03.2009

However Vantsev did not "feather in" with the managers of “Rostekhnologii” and soon resigned from the post of CEO of “Rosavia”, instead the company was headed by Deputy Transport Minister Boris Korol. Vantsev was not only the CEO of “Rosavia” but also owned  "Aviacompania" Plc., which was to become a legal entity of a new carrier, so Moscow bought out Vantsev’s shares from him. The reasons for Vantsev’s resignation were not called, but it was known that he was on bad terms with the deputy general director Igor Zavialov, supervising “Rosavia”. For a company “Rostekhnologii” Vantsev was a man who had a conflict of interests because he was a major shareholder of "Vnukovo" and the company Sky Express.
Source: Kommersant № 69 (4124) from 17.04.2009

In July 2009, Government of Moscow launched an offensive on Vantsev. The head of the City Department of Transportation Vasily Kichedzhi in his letter to Mayor Yury Luzhkov said that the

City government asset stripping process was done through the company “Vnukovo Handling”, controlled by Vantsev. He requested a verification of management's actions at Vnukovo, believing that because of them the city would not receive a controlling stake in "Vnukovo-Handling", which had the right to conclude lease contracts in the new terminal under construction. In other words, the city was trying to consolidate its influence over the airport.
Source: Kommersant № 123 (4178) from 10.07.2009

In 2009, “Vnukovo airport” Plc., controlled by the Government of Moscow, bought 49% stake from Vantsev in “Vnukovo Handling", a single operator for the sale of services at the airport. Package was sold at par value - 500 thousand rubles. Thus, the city secured more extensive control over the airport. It was explained that from Vantsev’s structures, Vnukovo-Invest Plc. and “Aviation Oil Company” sold their packages of “Vnukovo Handling". Vantsev had previously stated that "Vnukovo Handling" - was just a cash processing center and he had had no objection for a package purchase done by Moscow.
Source: Kommersant № 199 / P (4254) from 26/10/2009

Private shareholders of “Vnukovo” tried to protect themselves from Moscow's attempts to increase its influence at the airport. Perhaps this was related to the arrival of Lev Kvetnoy into the board of directors of Vnukovo, who was a Chairman of the Board of Directors of "Gazmetallproekt”. Quite possibly that he came to the board as a major creditor. Kvetnoy had been previously elected to the Board; Vantsev called him an independent director. Perhaps he turned to Kvetnoy for help. The second new member was the candidate from the city government Vasily Kichedzhi.
Source: Kommersant № 165 (4220) from 08.09.2009

In September 2009 the сourt enforcement officers arrested all accounts and the part of the property of Vnukovo airport on claims of DACA, which was included in the group "East Line", as an interim measure. Claims to the airport amounted to 800 million rubles. Vnukovo argued that debts, which DACA wanted to collect greatly, exceeded the amount of guarantee. Vantsev said that he initially did not want to sign a contract of guarantee for the debts of AiRUnion, but the Minister of Transport Igor Levitin had asked about it in person.
Source: Kommersant № 180 (4235) from 29.09.2009

Sources in the companies also claimed that a criminal case was initiated in respect of “Domodedovo Construction Management”.
Source: Prime-TASS from 22.06.2010

In the beginning of 2010, Vantsev announced that still he wasn’t a co-owner of Sky Express, and had nothing in common with the company. There was an opinion among the officials that Vantsev was a dummy figure, and the real owners, who stayed unknown, asked to run the company.
Source: Kommersant № 146 (4446) from 12.08.2010

In the end of 2010, it became certain that Kvetnoy was not only a private shareholder of Vnukovo airport, as Vantsev had stated, but also its beneficiary. Kvetnoy was the main owner of the company "Vnukovo-Invest" and Vantsev - his junior partner.
Source: Vedomosti from 11.11.2010