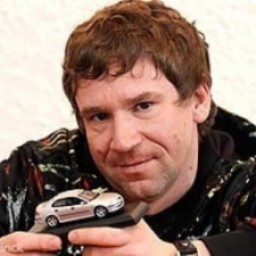 Born in 1975, Vladimir Antonov graduated from the Plekhanov Russian Academy of Economics in 1998, and got his MBA in the Academy of National Economy under the Government of the Russian Federation.

1999—2000 -  AIB Academchimbank, head of development and investment department, Chairman, member of the board of directors

2003 — Incorion Investment Holding Company, member of the board of directors

2002—2004 — Dekabank, Convers Group, Snoras bank, Chairman of the board of directors

2004 —  chairman of the Supervisory Board of Convers Group

In 1999, 49% shares of almost bankrupt Academchimbank were purchased by the ex-chairman of the Informprogress bank Alexander Antonov and his son, former Sberbank clerk Vladimir Antonov.

According to Ministry of Internal Affairs, upon the Antonovs` arrival Academchimbank had focused mostly on money-laundering and encashment.

In the beginning of 2002, the Investigative Committee of Russian Federation filed a criminal case involving Academchimbank and Alexander Antonov as a witness. IC was investigating money-laundering via banks Novator and the Fluran company. This ‘laundry’ buisiness wasn`t a sophisticated one. One office in the Novator bank was occupied by the leader of the left-wing movement Valeriy Sklyar, at that time charged with bombing monuments in Moscow and Moscow region. He grinded out Fluran or Novator`s bills. Later, the agreements were drafted on purchasing that alleged securities by foreign companies. On the pretext of that deals funds were withdrawn from Russia via a number of banks. IC officers had revealed the sum of at least several hundred millions of dollars transferred to the West by this way. The dubious deals involved several banks, including Academchimbank. Investigators found that it was the Academchimbank Deputy Chairman Sergey Ponomarev who held responsibility for operations with Fluran and Novator`s bills. When they decided to question him, it turned out that Ponomarev was murdered in 2000. The banker had $40.000 by him, that had been left untouched. The only thing that disappeared was the file with documentation confirming the purchase of Akademchimbank`s shares. In a month, on August 1, 2000, the crime boss Yuri Fedorov was killed, too.

Meanwhile, Akademchimbank was thriving. The Antonovs` expanding clientele included Boris Sokalsky, a prominent ‘casher’, who had managed to cash a gigantic sum of 17 million roubles since 2003, according to the Investigative Committee.

In the beginning of July 2008, the dead body of a Moldavian business leader Igor Veinberg Gers was found in Kishinev. The murdered man was known to distribute Moldovian wine to Russia.

As stated by the Moldovian police: “the victim had developed a personal conflict with Converse Group owners Vladimir Antonov and Alexander Antonov”. Moreover, they had been directly hreatening Veinberg.

In 2010 Vladimir Antonov`s name became known worldwide. It was after Spyker`s purchase of the Sweden car maker Saab from the US giant General Motors. However, GN set out a condition that Antonov had to be ousted from the Spyker`s shareholders, because the US company suspected Antonov of criminal background.

Nevertheless, Antonov had  invested in Saab`s deal, that his  Sweden partner confirmed. Besides that, the Russian had hired an independent expert to prove the purity of his buisiness.

In January 2011, it was reported that GM allegedly allowed Antonov back as Saab`s shareholder. But then Spyker started negotiating Saab`s sales with Chinese companies. At the same time, one of Vladimir Antonov`s companies purchased Bowler, the British off road vehicles manufacturer.

In 2011, Vladimir Antonov, one of the main shareholders of the nationalized Lithuanian Snoras bank, was recognised as suspect with regard to a criminal case of stripping assets in Latvian Snoras subsidiary bank Latvias Krajbanka. 100 million lati (about $200 million) was revealed to be missing.

Before the police filed against the bank`s directors a criminal case upon the signs of violating  Part 2 Section 196 (“for a person who, being a responsible employee of an undertaking (company) or organisation, commits carrying out intentional acts, in bad faith using his or her authority or exceeding such, if these acts have caused substantial harm to rights and interests of the undertaking (company) or organisation, or to rights and interests protected by law of another person”)

In November 2011, the former shareholders of the Lithuanian nationalized Snoras bank, Russian buisinessman Vladimir Antonov and his partner Raimondas Baranauskas were arrested in London.

In 2012, a British court arrested property belonging the former majority shareholder of nationalized Lithuanian Snoras bank Vladimir Antonov, worth €492 million.  Real estate, securities and accounts are subject to arrest. The court had made given decision in relation to the request from the insolvency administrator of Snoras Bank. Antonov hasn`t been notified and may appeal the court order.