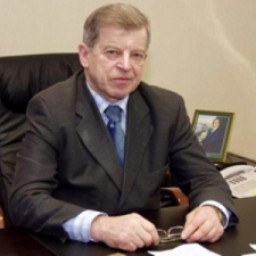 2 July 1939, Tolkachi settlement in Shklov district of the Mogilev Region, Belorussia) studied engineering - first at the Mogilev College of Machine Building (1953-1957), than he took distant course at the All-Soviet Distant Training Polytechnic University. He was trained as a machine operator.

During 1957-1987 Galagayev worked at Yaroslavl-based Krasny Mayak plant, key producer of mechanic vibrators in the USSR. He started working as a lathe operator and was upgraded to the deputy chief engineer of the plant. In 1980-1987 he chaired the «primary party organisation» at the plant.

1987-2005 director general of Yaroslavl-based Balkanskaya Zvezda (trans.: Star of the Balkans) tobaco factory which became one of the largest producors of tobaco items in Russia

2000 member of the legislature of the Yaroslavl region, member of the United Russia faction, chairman of the committee for economic policy

In 2004 Galagayev sold his stake in Balkanskaya Zvezda to Altadis multinational manufacturer of tobacco and cigarettes. He invested the capital into construction business and hospitality industry.

Member of the board of Economic Council of the Yaroslavl Region, since 2003 the chairman of the organization

Galagayev is the richest man in the Yaroslavl Region. In 2011 the Finans magazine ranked him 477 in the list of the richest people of Russia. Galagayev’s wealth is estimated at 4.9b roubles ($170m).

He is married and has got 3 children.

In 1980-1987 Vladimir Galagaev was the partkorg, or the secretary of the party bureau at Krasny Mayak plant. In 1987 he was elected the director of Yaroslavl’s V.Lenin Experimental Tobacco Plant.

Co-owner of Balkanskaya Zvezda tobacco factory Vladimir Galagayev first tried to sell his company to American Philip Morris, but the parties failed to agree on the terms of the deal. After that Galagayev and the company’s management sold the factory to Franco-Italian Altadis group.

By the August 2004, 50% of Balkanskaya Zvezda was sold. At that time Vladimir Galagayev announced his plans to go into the hospitality business. He had been looking for investors and the site of his future hotel in 2001, a year after Altadis made the first buyout offer. In the same year Balkan Star Service company was established as a part of Balkanskaya Zvezda group. Balkan Star Service operated the construction works that began in July 2003. On 5 November 4 star the hotel was opened. The price for a room in the hotel, according to the business plan, was $130-150 per night.

In 2004 Vladimir Galagayev signed the agreement with Franco-Spanish Altadis company about buying out the non-core assets of the Yaroslavl tobacco factory. The proceeds from selling Balkanskaya Zvezda factory were 180 euros with the major portion going to Vladimir Galagayev. He used this money to buy out a number of non-core companies in the construction field, controlled by Balkanskaya Zvezda, including a honeycomb concrete plant (10m euros) and Yaroslvl's lime-and-sand brick plant. Galagayev also bought 14m euros worth 4 star Ring Palace Hotel.

On 3 March 2005, the fire broke out at the dacha of Vladimir Galagayev, member of the regional legislature, in Tverdino village of the Yaroslavl district in the Yaroslavl region. The fire destroyed all the building.

The police found empty fuel jerrycan near the place. The arsonist certainly had a plan. Fellow members of the regional legislature claimed that the arson was a threat. Someone wanted to threaten Galagayev and force him to leave the development business. Galagayev owned a number of businesses in the field of construction. According to a source, the conflict might have arisen over a sandpit, situated near Tunoshna, 12km from Yaroslavl. Galagayev exploited the sandpit, to dissatisfaction of his competitors from other regions.

The arson was called by the regional newspapers a black mark against Yaroslavl business community made by businessmen from other regions.

On 21 July 2011, United Russia party and the organizations of the Putin’s All-Russia People’s Front held primary election of the candidates for forthcoming elections to the State Duma. According to the United Russia web page, there was Roman Galagayev, Vladimir Galagayev’s son, on the list. He is a director general of Ring Premier Hotel LLC.