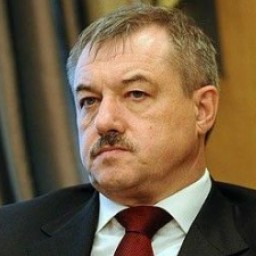 Born on December 8, 1955. In 1975 he graduated from Ural Polytechnic Institution under the Ministry of Ferrous Metallurgy of the USSR, in 1988 - the Siberian Metallurgical Institute n.a. S. Ordzhonikidze. Doctor of Economic Sciences, professor.
Source: vedomosti.ru

He began his career as electrical fitter, and then worked as construction electrician in Sverdlovsk (now Yekaterinburg). In 1975 he headed the civil structure of the Novokuznetsk Railway (Chief of the Novokuznetsk branch of the railroad was the acting governor Aman Tuleyev).

In the 1990's he led the trade and intermediary firms “Sibtorgsin” and" H.M.K. Ltd, and then - the largest profile cut "Chernigovets” in the Kuzbass.

Having collaborated with Vadim Varshavsky - owner of the company "Russian coal" - in 2000's he took over as president and became one of the owners of the holding "Siberian Business Union" (engineering, coal mining, transport, etc.).
Source: bfm.ru

From December 2007 - State Duma deputy, he was elected on a federal list of candidates nominated by the All-Russian political party United Russia. Member of the faction "United Russia". Deputy Chairman of the Duma Committee on Transport.
Source: vedomosti.ru

Member of the International Academy of Ecology and Life Safety.

The main directions of scientific and production activities: Ecological and economic assessment of the coal industry, state action - the development of rail transport in Russia.

№ 234159-5
Amendments to the Federal Law "On state regulation of coal production and use, about the features of social protection of organization’s workers' of the coal industry is" aimed at the relevant committee 21.07.2009

№ 280873-5
On amending the Labor Code of the Russian Federation (on the peculiarities of regulation of workers employed in underground work), the Council of the State Duma (first reading) postponed consideration of the bill 20/09/2010

№ 325624-5
Traffic rules of the Russian Federation; Council of the State Duma (the preliminary examination) decided to appoint a responsible committee, to submit comments, suggestions and comments to the draft, to draft a bill to the State Duma, to include the bill in the tentative program 03/16/2010

In May 2004 CJSC "Salek", part of the union of industrial enterprises of the Siberian Business Council (SBC), which president is Gridin, acquired at auction the right to use the “Yuzhny” coal section. " Gridin also announced the SBC’s plans to increase coal mining in its enterprises.
Source: Kommersant (Novosibirsk) № 95 (2934) from 28.05.2004

In February 2005, Gridin and Governor of Kuzbass, Aman Tuleev signed an agreement on socio-economic cooperation between the authorities of the region and the SBC. The agreement provided for investment in production, increase in wages of enterprises, as well as construction on the shores of Lake Tana, the ski complex of five ski slopes, ski lifts, skating rink, gym and a hotel.
Source: Kommersant (Novosibirsk) № 27 (3111) on 02/16/2005

In February 2005, the SBC by Gridin participated in the auction for the right to subsoil use in the field of solid minerals sector "Erunakovsky-8”. In total, the auction received nine nominations, including by Yuzhkuzbassugol, whose interests turned out to be lobbied by the government of Kuzbass. Governor Aman Tuleyev approached a number of property owners applying and asked them not to participate in the auction. After this part of the applicants withdrew their applications and part of them did not come up for auction. As a result, on the first day of the bidding only ZAO Salek, a part of the SBC, Kuzbassrazrezugol and Raspadskaya were involved, but the latter did not make the auction a single application. Most likely, mine was involved to hedge Yuzhkuzbassugol as an auction could have been declared invalid, if the number of applications for participation in it was less than two. Thus, only Gridin did not obey to Tuleyev and took part in the struggle for the land plot, as Kuzbassrazrezugol also stopped bidding shortly after the auction.

After another bid the auction was postponed to another day, and then Gridin did not appear. In it is not known for certain whether it was his independent decision, or Tuleyev influenced it.

The next day there was only CEO of Yuzhkuzbassugol, Vladimir Lavrik at the auction, he won the auction. he replied evasively to questions about the support of Governor Tuleyev.
Source: Kommersant (Ekaterinburg) № 31 (3115) on 02/22/2005

Nevertheless, thanks to the participation of Gridin in the auction the Russian record in the cost of the sale of subsoil use rights was set - - the final price was 57 times higher than at the start.
Source: Kommersant (Novosibirsk) № 31 (3115) on 02/22/2005

Intense struggle waged also at the auction for the site "Mine Field “Chernigovskaya" in the Kemerovo region. ZAO Salek expected to get the plot, because before that it had already won the auction for the right to develop the site “Yuzhny”, which borders "Pole". But OOO “Shahta № 12” also took active participation in the auction, so that the representative of CJSC" Salek "even had to make a move after their own proposals to win for sure. Gridin explained that new supplies were needed for the stable development of the company after the acquisition of Yuzhny.
Source: Kommersant (Novosibirsk) № 115 (3199) of 25.06.2005

In October 2005, Gridin as a representative of the Yabloko party was involved in the conflict between prisoners and authorities of the prison № 12 in Dubrovlag in Mordovia. The inmates staged a hunger strike to protest against the bullying. Gridin went to the scene and spoke with a representative of the prisoners.
Source: Kommersant (N. Novgorod) № 195 (3279) on 15/10/2005

In November 2005, acting head of the republic of Mordovia Nikolay Merkushino appealed to President Vladimir Putin to make an early vote of confidence for providing him with the power for another term. Putin gave Merkushin a positive response and submitted his application for consideration. Gridin negatively reacted to the nomination of Merkushin. According to him, the decision of Putin meant that the country becomes unmanageable. However, nobody questioned the decision of Putin because Merkushin had always been loyal to the federal government.
Source: Kommersant № 209 (3293) on 11/08/2005

In April 2006, Gridin announced his plans to work together with “Kuzbassrazrezugol" to build a coal port near Murmansk. The companies decided to build a port in half, but did not rule out state involvement in the design stage. In connection with the construction plans in Murmansk SBC had to abandon the intention to build a coal terminal in Ust-Luga in conjunction with oil trading terminal TNK-BP. But as the TNK-BP subsequently abandoned its plan, the choice was made in favor of Murmansk. At the same time, Gridin planned construction of a coal port in Ukraine.
Source: Kommersant (Novosibirsk) № 64 (3395) on 12/04/2006

In February 2007, "New investment and technology" have expressed their desire to buy a third of the SBC. The company sent the petition to the Federal Antimonopoly Service. However Gridin said he was not going to sell part of his company and the resolution of the FAS will only mean that "New investment and technology” will be able to send him an offer.
Source: Kommersant (Novosibirsk) № 29 (3605) on 22.02.2007

In September 2007, they decided to combine the elections on several levels in the republic of Mordovia: the elections to the National Assembly of the republic, district and village councils, and elections to the Duma. It was decided to combine to dissolve the National Assembly. The opposition was confident that this combination may be advantageous to the United Russia party. Elections to the State Assembly of Mordovia also had to go through a mixed system: half of the deputies were elected in single member constituencies, the other on party lists. Gridin described the situation as "disgraceful." Opposition figures considered elections to be non-alternative and boring.
Source: Kommersant (N. Novgorod) № 189 (3765) on 10/16/2007

In 2007 deputy head of Rostekhnadzor, Shamsudin Tuguz suggested the possibility of closures of mines in the Prokopevsko-Kiselevsky district admitting violations of safety requirements. Half of the mines in the area are owned by Gridin. Tuguz caveat that the alternative would be to re-mine. Kemerovo Region Governor Aman Tuleev spoke out strongly against the closure of the mines, citing the possible destabilization of the region's economy. Gridin supported Tuleev.
Source: Kommersant (Novosibirsk) № 192 (3768) on 10/19/2007

As expected, United Russia received a majority vote at the elections to the State Assembly of Mordovia in 2007. According to Gridin, at the stage of placing campaign materials already his party faced with illegal use of administrative resource by "United Russia". The Yabloko party banners were ripped off by someone from the house, where they had been agreed to be.
Source: Kommersant (N. Novgorod) № 223 (3799) on 04/12/2007

In 2008, the Tax Office considered that in 2004-2005 ZAO “Chernigovets" of the SBC holding supplied coal at low prices under the three long-term contracts with firms of Mir Trade AG of Switzerland, Mir Incorporated and Transmix Holding of Canada, and underpaid taxes in budget . In addition, these contracts were considered to be transactions between related entities. Andrey Gridin, the son of Gridin, headed the Mission of Mir Trade AG, while Gridin was a member of the board of directors of the cut. In 2009, the company tried to gain recognition of the decision as invalid. The lawsuit by "Chernigovets» was based on the fact that tax authorities use informal statistics of market prices for coal in the evaluation of the company. In addition, "Chernigovets" stated that the board did not consider the controversial deal, which means that Gridin allegedly had made no decision about the contract with his son.
Source: Kommersant (Novosibirsk) № 31 (4086) on 02/20/2009

In September 2008, the SBC decided to start building a sports complex for the men's volleyball team of Kuzbass. NP “Volleyball Club "Kuzbass" was also established on the initiative of SBC, Gridin was elected as one of the vice presidents of the club.
Source: Kommersant (Novosibirsk) № 160 (3977) on 09/06/2008

In August 2010 Gridin spent two hours at the police station. In the evening he dined with his two sons in the cafe, and masked police raided in and checked the documents of everybody present. Documents of Gridin were called suspicious; all three were taken to the office, and then released. According to police, the police department of Saransk received information that there were armed citizens ranking in the federal wanted list the cafe. Ostensibly, the audit found that there were the leaders of criminal OCG (organized criminal group) in the cafe. But there was only one person kept out of all the detainees in the department, the rest were released. Gridin believed that the incident occurred on the order of the authorities, as the term head of the republic Merkushino at the time was nearing his end, and in 2011 elections in the State Assembly were to be held, and Gridin with Yabloko, according to him, all the time reveals the objectionable acts of corruption and claims actively on them.
Source: Kommersant № 158 (4458) on 08/28/2010

In August 2010, Yabloko has announced the risk of forest fire in Mordovia, threatening the lives of prisoners of 17 correctional facilities in the Zubovo-Polyansky district. According to Gridin, a fire broke on a distance of 200 meters from the prison and it was impossible to evacuate the prisoners: railroad had been dismantled and sold off to unknown a few years ago. However, the FSIN refuted this information, stating that the situation with the fire had been stabilized and paddy had been prepared to evacuate the prisoners.
Source: Kommersant (N. Novgorod) № 145 (4443) on 08/11/2010