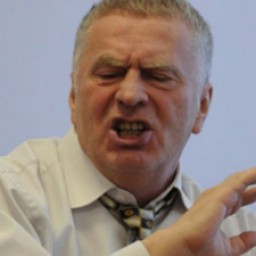 In 1964-1970 he studied at the Institute of Oriental Languages ​​under Moscow State University named after M.V. Lomonosov.

In 1969 he took a year-long practice in the city of Iskenderun, Turkey.

In 1965-1967 he studied at the International Relations Department of the University of Marxism-Leninism.

From 1970-1972 he served in the Political headquarters of Transcaucasus Military District in Tbilisi.

In 1972-1977 he took evening courses at Law School of Moscow State University named after M.V. Lomonosov.

In 1973-1975 he worked at the Soviet Peace Committee in the department of Western Europe.

From January to May 1975 he was fellow of the dean’s office of the Higher School of Trade Unions, now the Academy of Labour and Social Affairs.

In 1975-1983 he worked in Inyurkollegiya (Foreign Legal Collegium).

Since 1990 he conducted party work for the Liberal Democratic Party.

On June 12, 1991 he was nominated as candidate for president of Russia.

In December 1995 he was elected to the 2nd State Duma of the Russian Federation.

In January 1996 he was nominated as a candidate for President of the Russian Federation from the Liberal Democratic Party of Russia.

In January 2000 he was elected Deputy Speaker of the State Duma of the third convocation.

In the presidential election on March 26, 2000 more than 2 million voters voted for him.

In 2008 he ran for President of the Russian Federation.

On April 24, 1998 at the scientific council of MSU he defended his thesis on the topic “Past, Present and Future of the Russian nation”, thus receiving a doctoral degree in philosophy. He is author of numerous books and publications (collected works include more than 50 volumes). He ia member of Russian Union of Journalists.

Zhirinovsky is notorious for his involvement in numerous brawls. On April 8, 1994, he and the guards beat the deputy Vladimir Borzyuk, who had announced his resignation from the Liberal Democratic Party. On September 9, 1995 he dragged MP Yevgeniya Tishkovskaya by the hair and began to strangle her. The woman suffered because she who tried to intervene in a fight between MPs Nicholay Lysenko and Gleb Yakunin. Zhirinovsky also accidentally slapped MP Nina Volkova in the face. Especially famous was One on One TV show of Aleksander Lyubimov broadcast live on June 18, 1995 on ORT Tv channel. Zhirinovsky threw a glass of juice in the face of his opponent Boris Nemtsov, the governor of Nizhny Novgorod, who offered the leader of LDPR the cure his syphilis.

Zhirinovsky is in his second marriage. In 1977 he and Galina Lebedeva divorced, but since 1985 they are back together again. Their son, Igor Lebedev, in January 2000 became head of the Liberal Democratic Party faction in the Duma.

Zhirinovsky repeatedly applied for admission to the Communist Party, but they would not let him join even the army, despite the fact that he worked there in the Political Department. The part refused to admit him allegedly due to the fact that his views were not consistent with the program and ideology of the party. According to some reports, in 1977 he nearly became a member of the underground party. Its members were arrested before the meeting Zhirinovsky was to be present at.

On December 13, 1989 Zhirinovsky at the invitation of Vladimir Bogachev took part in the meeting of the initiative group of the Liberal Democratic Party of the Soviet Union (LDPSS). Zhirinovsky gave the party his new program and became the leader of this organization. He received permission from the District Communist Party Committee and the KGB to hold the constituent congress of LDPSS, which took place on 31 March 1990; he became chairman of the party. On October 6, 1990 there was the second (extraordinary) Congress of LDPSS, during which at the suggestion of Bogachev, main coordinator of the Central Committee of LDPSS, Zhirinovsky was dismissed from his post as chairman and expelled from the party. Zhirinovsky did not recognize the congress and its decision and the party split in the LDP and LDPSS. On October 20, 1990 Zhirinovsky held a conference of LDPSS, during which those behind the previous congress- decision were excluded from the party.

In 1995, Torah Annunziata (a city near Naples) city prosecutor accused Vladimir Zhirinovsky of supplying the Serb Army of Radovan Karadzic with so-called fuel-air explosives and heavy multiple rocket launchers BM-30 Smerch. Zhirinovsky was working with a Slovenian businessman Nicholas Oman, which in turn cooperated with the Srpska Garda (Serbian irregular militia) and Radovan Karadzic. Weapons came from Tula. Karadzic received a toll of 6 million German marks. The money was transferred to an account at Banca del Gottardo, an offshore company owned by Sarmos Establishment Vaduz.

The Italian police, when investigating the scheme of arms supply on several contracts with Bosnia and Kosovo, encountered a structure, which was even bigger than expected. "Most transport was provided with bank guarantees from a Swiss lawyer”, says Giovanni Lepori, Carabinieri general (Italian police). “As soon as we were able to find out who paid for the guarantee, we noticed that all these people are somehow connected with "Al-Qaeda."

Further investigation results of were shocking. The underground organization not only sold weapons to Karadzic, but also to anyone acting on a global scale. Vladimir Zhirinovsky was just one of many suppliers. A small Sicilian community, Gamma centre, turned out to be the coordinator. Michel Papa, president of the company was at the same time head of the Islamic Centre of Catania and the Italian-Arab national association.

In 2000 a Venice court found all Italian companions of Zhirinovsky guilty. If only Zhirinovsky appeared in court, he would also have been convicted.

In February 1996 there was a murder attempt aimed at Aleksander Vengerovsky, former deputy chairman of the State Duma from the Liberal Democratic Party. Vengerovsky said that at first Zhirinovsky saw a competitor in him, then sold his post $ 4.5 million to the Ingush tycoon Mikhail Gutseriev, and when the deputy speaker protested, he was shot in the knee. In an interview with journalist Andrey Karaulov, Vengerovsky directly accused Zhirinovsky of the assassination attempt, citing information received from the deceased Shevchenko and a call from Zhirinovsky, who allegedly wanted to know the outcome of the attack exactly 10 minutes after the shot. In addition, the victim accused those close to the head of the Liberal Democratic Party of several criminal episodes and pointed out that the liberal-democratic members of parliament, Sergey Abeltsev, Michael Musatov, and Sergey Sigarev defiantly refused to give testimony in the case.

Back in 1992 all property of Vladimir Zhirinovsky, according to available records, consisted of only a Volga car (GAZ-2410) and a small one-bedroom flat on Sokolnichesky Val, provided for him be the department of municipal housing in Moscow.

Living entirely on a single salary of an MP, from 1994 to 1997 deputy Zhirinovsky spent just under 12 billion rubles only for the acquisition property and real estate. According to the documents, he is the sole owner of the acquired property. Cited facts are only those confirmed and proven by the tax authorities. At the same time, absolutely all 122 apartments in 44 federal entities Zhirinovsky paid for in cash only.

On September 30, 2004 Iraq Study Group, established by the Ministry of Defense and U.S. Central Intelligence Agency, released a report which indicated that Saddam's Iraq violated the UN-imposed sanctions and sold oil, using a system of double contracts. Vladimir Zhirinovsky was mentioned among others on the list of Russian recipients of vouchers. According to the ISG, in 1999 Nafta-Moscow bought on his voucher, 550 000 tonnes (3.85 million barrels) of oil. In the second half of 2000, Zhirinovsky also received vouchers for 9 million barrels of oil, which were used through Tyumen Oil Company (TNK).

In 2004 Vladimir Zhirinovsky was a witness in the trial over the murder of Galina Starovoitova, who had been killed in her apartment building in St. Petersburg on November 20, 1998. At the time of the murder Ruslan Linkov, an assistant to the deputy, was with her and was shot in the head. The investigation found the killers and the organizer of the murder. They were sentenced to terms ranging from 11 to 23.5 years in prison.

Zhirinovsky was summoned to the city court of St. Petersburg as a witness. He volunteered to participate in the litigation over the murder of Starovoitova after Lyudmila Narusova, a member of the Council of Federation, said in court that Starovoitova and MPs from the Liberal Democratic Party had a serious conflict. Zhirinovsky said that Starovoitova really was for him the main political opponent, but the leadership of the Liberal Democratic Party did not aim to murder her.

Media wrote that the relationship between Zhirinovsky and Starovoitova was so nasty that when he returned to St. Petersburg to testify in the case, on the sixth anniversary of her murder Zhirinovsky made a cynical show at the grave. Although the tomb was on the restoration, the main Liberal Democrat demolished the fence around it, put a table with vodka on the tombstone, started speculating over the nasty character of the murdered MP, and hoisted a bottle of cologne named after himself on Starovoitova’s gravestone. Just to think of it, contracting the murder of a person you hate so much even years after the death is not so rare a thing to do.

Yury Kolchin, the convicted organizer of the murder of State Duma deputy Galina Starovoitova, said during questioning that the contractor was a former State Duma deputy from the Liberal Democratic Party, Mikhail Glushchenko.

Meanwhile, Starovoitova’s assistant had no doubt concerning being involved in the murder, but stresses that one should judge all the parent organizers. "My personal opinion is that Glushchenko should be responsible for the death of Galina Starovoitova. But charges should also be brought against those who gave him orders ", said Linkov. “I would like to hear the names of all of them”, he added.