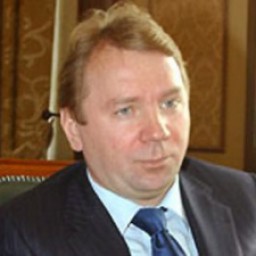 Vladimir Igorevich Kozhin was born on February, 28, 1959 in Troitsk in Chelyabinsk region. In 1976 he began his studies at the electro-physical faculty of the Ulyanov (Lenin) Leningrad Electronic Technical Institute.

In 1980 Mr Kozhin became a representative of the Electronic Technical Institute to the   All-Union Leninist Young Communist League of the Petrogradsky district.

In 1982 he graduated from the Institute and began working at the district committee of the All-Union Leninist Young Communist League.  There he served as an instructor and then became head of department.

In 1986 he began to work as an engineer at the scientific production association Azimuth.

In 1989—1990 he attended lectures at the Business School of the Foreign Trade Academy.

In 1990 he was appointed CEO of Azimuth International ltd.

In 1990 he graduated from the Business School of the Foreign Trade Academy;

In 1990—1991 he was an apprentice at the Baden-Württemberg Academy in Stuttgart.

In 1994 he was appointed head of the Northwest Regional Centre of the Federal Directorate for Currency and Export Control.

In May 1995 joined Our Home – Russia political party, head of St. Petersburg region council of which was Mr Vladimir Putin.

In 1999 Mr Kozhin became head of the Federal Directorate for Currency and Export Control.

In 2000 he was appointed Head of the Presidential Property Management Department.

In May 2008 President Dmitry Medvedev reappointed Mr Kozhin at the position of Head of the Presidential Property Management Department.

He is chairman of the Council of Winter Olympic Sports Association Presidents.

He is married. His spouse, Alla, is a relative of Ms Lyudmila Putina. In 1991—1996 his wife was a family dentist for the Putins. His son Igor is chairman of the board of directors of Roscommunenergo, minority shareholder of one of RAO ES subsidiaries, and Gazprom group manager.

In 1993 Mr Vladimir Kozhin was offered to be head of the Association of joint ventures and later chairman of a businessmen forum. At that time Mr Vladimir Kozhin started lobbying the interests of large Western companies and enterprises in Russia.

To avoid paying VAT of two and a half million dollars to an American Otis Elevator company it was necessary to have a special order of the Russian government. Mr Vladimir Kozhin was pushy enough to get it. He lobbied for the order together with the deputy mayor and head of the Commission on enterprises with foreign investment, Mr Vladimir Putin.

Mr Kozhin also promoted interests of another company, Rothmans Tobacco, imported equipment of which was tax exempt thanks to the efforts of the same group of people.

Recommended by Mr Putin, in 1994 Mr Vladimir Kozhin was appointed head of the Northwest Regional Centre of the Federal Directorate for Currency and Export Control.

According to the investigation, in July 1995 Mr Kozhin booked a trip to Bulgaria for him and his wife. He paid the travel agency, St. Petersburg-Holidays, 3.975 thousand non-denominated rubles through the Northwest Regional Center that he was head of. The St. Petersburg prosecutors are still investigating the criminal case against Mr Kozhin and his former accountant, Ms Fedorova, who are accused under articles 170 and 293 of the Criminal Code of the Russian Federation.

In 2002 construction of a new sky-resort for the rich began in Lunar Glade (Lunnaya Polyana) on the western slope of Fisht Mountain, in the Caucasian State Natural Reserve. The development of protected area was carried out under the disguise of a wildlife research unit.

The media publicized a transcript of the meeting held on July 13, 2004 on the issue of building «Biosphere». The chairman was Nikolay Borisenko, at the time a First Vice-President of the Rosneft. According to the transcript, it was decided to hand a land plot in the reserve over to Dagomys Recreational Complex (state unitary enterprise) for «further gratis use». Dagomys is a lower organisation of the Presidential Property Management Department.

On September 9, 2006, Kozhin sent a private memorandum to Minister of Natural Resources Yury Trutnev: «The Presidential Property Management Department provides operational management of the building of «Biosphere» research unit. The project has high priority». Kozhin asked Trutnev to give as soon as possible all necessary approval to building activities in the protected area. He also disclosed the name of the company that paid for the project, NK Rosneft public company.

On September 22, 2006, Kozhin sent another memo to Trutnev: «The President of Russian Federation has assumed control over building of the road connecting Chernigovskaya village (Apsheronsky District of Krasnodar Region) with «Biosphere» research unit… The works are funded by the subsidies of federal budget… in the sum of 400 million roubles».

In the end a three-storeyed chalet appeared on the slope of Fisht. Ka-32 military helicopters were used to bring building materials to Lunar Glade. Each helicopter did at least 10 flights every day. In 2003 one of the helicopters crashed after collision with a dangerous rock. 9 were killed. In 2004 the cargo fell down, killing a workman.

Local springs were destroyed, due to miscalculations and poor manangement of the development project. When in 2006 Vladimir Putin decided to visit the resort for skiing, the water had to be delivered by helicopters.

In summer 2007 the forest was cut down to make an opening, several hundred metres in length and 30 metres in width. 559 trees were sawn off, beech, sycamore, mountain ash and fur tree. The police department of Maykop District of Adygeya Republic opened the criminal proceedings (case №5070431). The damage was estimated in the sum of 21195351 roubles ($750000). When the investigators decided to question some high-ranking officials from Moscow who ordered to cut down the forest, the case was requested by Moscow where it was shelved. No one has been punished.

It was rumoured that purple-suited CEOs of KB-Engineering Company and Russian Investments Company were a little more than puppets of a sinister fugitive Boris Berezovsky. In 2005 VTB-Capital  acquired Petersburg-City Company. Experts said that Andrey Molchanov sold his stake in the asset because his business interests overlapped with the interests of a high ranking figure in the Kremlin beau monde, head of the Presidential Property Management Department Vladimir Kozhin. Papers wrote that people saw Molchanov flee to London where Boris Berezovsky has languished. It was also in the papers that a high-ranking Kremlin official had met privately with former CEO of Vozrozhdeniye Peterburga Company Sergey Mironov. The latter asked the former to do him a favour. As idle talkers say, Molchanov soon came back to Moscow.

In 2010 the ecologists examined a draft of the notorious development project, conceived by the Presidential Property Management Department. The plan stipulated the construction of so-called health and fitness complex (in fact, a new residence of Russian President) in the territory of a unique natural area on the coat of the Black Sea, called Utrish. It was the Presidential Property Management Department that planned to ruin nature.

DAR Foundation for Regional Initiatives, a little known company controlled by oligarch Leonid Michelson and United Russia deputy of the State Duma Leonid Simanovsky, was chosen as an umbrella company (used to pump money through). However, the title page of the project of «Health-and-fitness complex in the resort of Anapa in the Krasnodar Region» points to the employer and customer of the construction of a new state residence in Utrish. Below «approved by» typed line there is a signature of Vladimir Kozhin.

After examining the project the ecologists arrived at the conclusion that the building works threatens a unique diversity of plants and animals and will lead to the brutal  distortion of landscape.

The documents, obtained by the Novaya Gazeta, prove Vladimir Kozhin, who is in charge of the presidential property, signed the papers concerning the construction of the «palace for prime minister» in Gelendzhik (Krasnodar Region). These are the investment contract (№ УД-2009д made June 10, 2005) for investment in a holiday-hotel in the vicinity of Praskoveevka village, near Gelendzhik (Krasnodar Region), and a supplementary agreement to the contract, made November 10, 2008.

The subject of the construct was investment in the building of a guest house in the territory of a land plot of 740 square metres made by Lirus public company, a full subsidiary of Rosinvest LLC. Rosinvest Company was established in 2005 by initiative of Vladimir Putin, who entrusted this job to Nikolay Shamalov, co-founder of the famous Ozero cooperative society and a shareholder of Rossiya private bank. The shares in the bank belong to Yury Kovalchuck and the companies controlled by Gennady Timchenko - both Putin's old friends.

Lirus also used to own a stake in SOGAZ Insurance Group. The rest of the Group belonged to the bank Rossiya (via IK Abros LLC), Gazprombank and Aktsent Firm, allegedly owned by Mikhail Shelomov, a son of Putin's cousin.

A supplementary agreement was signed in November 2008 with the purpose of changing the owner due to the crisis. According to the agreement, a new investor was chosen instead of Lirus - company called Indokopas, whereas «Troops unit 1437» of the Federal Protective Service became the developer. Indokopos belongs to Rirus Company, controlled by Nikolay Shamalov.

On January 14, 2011 the Federal Anti-Monopoly Service granted the petition to merge Rirus and Indokopos in a single company. The merger agreement was signed by Vladimir Kozhin, who had denied any involvement of the Presidential Property Managing Department in the construction works in the vicinity of Gelendzhik on the coast of the Black Sea.