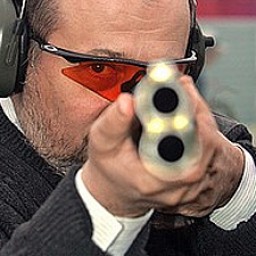 Born May 7, 1956 in Ivanovo. He began working in 1975 as electromechanic in «Yuzhkuzbassugol».

In 1978 he graduated from the Siberian Metallurgical Institute on a speciality «engineer-metallurgist».

In 1992 he graduated from the Academy of National Economy with a degree in economics and management.

He began his career in 1975 in an electrical union «Yuzhkuzbassugol». On graduating he worked in the NGO Tulachermet, where he rose from an improvised steelmaker to deputy chief of the shop.

Since 1986 - Deputy Chief Engineer, and since 1989 - Deputy Director of the Karaganda Metallurgical Combine ON Soskovets;

Since 1993, he joined the Board of Directors of several leading Russian metallurgical enterprises;

Since 1998 - Chairman of the Board of Directors of OAO Novolipetsk Metallurgical Combine;

In 2007, he acquired a 14.42% stake in Bank Zenit through offshore companies «Silener Management»

Professor of the market problems and economic mechanism department of the Academy of National Economy under the RF Government, the author of 16 monographs and more than 150 scientific publications.

Laureate of the Council of Ministers of the USSR in science and technology in 1990.

Commander of the Order of Merit,

President of Shooting Union of Russia. Master of Sports.

The main asset is a controlling stake in Novolipetsk Metallurgical Combine.

For the first time the name of Vladimir Lisin got into the field of view of media in the late 80's, when Lisin, as deputy director of the Karaganda Steel Plant, Oleg Soskovets (later Minister of Metallurgy of the USSR) established a Soviet-Swiss company «TSC-style», which drove abroad substandard metal of Karaganda metkombinata using loopholes in the legislation and general chaos in the "reconstructed" country. Meanwhile percentage of defected goods at the mill increased dramatically, allowing Lisin to earn his first big money.

In 1991, Oleg Soskovets moved to Moscow. Lisin followed him and moved to the capital. However, Lisin always denied his friendship with Soskovets, saying that they met only a few times in the city. But whatever he said it was Soskovets due to whom a future oligarch Lisin met with those who helped him setting his own business - Brothers Michael and Leon Cherniy, and Sam Kislin. In the first years of cooperation Lisin helped their foreign affiliates buying on the cheap products of Krasnoyarsk, Novolipetsk, Magnitogorsk Metallurgical Plant, Sayan and Novokuznetsk aluminum smelters. Then, Lisin became member of the boards of directors of those enterprises. In addition, he first began the practice of tolling - plants paid for raw materials with finished products (mainly ferrous metals), which Lisin and his partners sold for export, but without paying customs duties. Turnover was hundreds of millions of dollars.

In late 1992, Lisin was involved not only in black, but in non-ferrous metals business. His new companion David Reuben helped him in this, together with brothers Cherniy they created a group the Rans World Group (TWG). Later they were accompanied with Oleg Deripaska, who was making his first steps in business then. In 1993, Lisin became a full partner of the TWG. Under the group's control was a majority largest metallurgical enterprises in the country. Meanwhile, the primary defender of tolling was the same old Oleg Soskovets, who had becoame a deputy prime minister by that time.

In 1995 several assassinations occurred in the metallurgical industry. Those killed were leaders of companies who had interests in aluminum plants, controlled by Lisin. The Commercial Director of the Sayan Aluminum Plant had almost been killed. Lisin was a member of the Board of Directors of the Plant.
«Lone shooter» - "Russian Forbes", December 2004

But then he broke up with his former companions in a fairly quiet way (at least without shooting). By the time the position of TWG got sharply weakened. It is noteworthy that the fall of the group happened a few months after Oleg Soskovets scandalously left his post in the government of Russia. The then head of the presidential administration, Anatoly Chubais and Prime Minister Viktor Chernomyrdin were not going to support Lisin's business. But Lisin still managed to take control of NLMK when the business was divided.

In November 2005 brothers Rubeny from the UK sued Lisin, alleging that he gained control of the NLMK by secret transfer of shares from the management of a nominee under the control of his own firm. However, that judicial story was quickly ended. Lisin managed to resolve the conflict peacefully, calling for help Oleg Deripaska and Vladimir Potanin. The first prevented the brothers Cherniy from bankrupting the factory. The second did not interfere Lisin's repurchase of shares in NLMK from foreigners (Potanin owned 50 percent stake of TWG).

However, they say so far that Lisin was only a nominal owner of all the "facribs-plants-ships». Ostensibly his patron Soskovets was still standing for him, as well as brothers Cherniy together with Izmailovskiy OCG (organized criminal group), which in 90-es "covered" and "milked" NLMK. It is believed that for Izmailovskiy bandits Lisin got a Moscow factory "Ruby" and Gorbunov Palace of Culture, better known as "Crust". Izmailovskiy authority Anton Malevskii was earning an income up to $ 15 million. Someone named Aksen also looked after the shares of Izmailovskiy, after the death of Malevsky (he was fond of exotic sports) led the OCG.
"So steel was bought. Steel tycoon Vladimir Lisin can shoot in all senses" - Stringer, 13.03.2002, Lipetsk juggling "- The interviewer, 15.10.2008

Lisin is not fond of loud public scandals, he prefers settling all disputes quietly. Indicative is the history of Lisin's relations with Vladimir Potanin. After having agreed about collaboration, the partners quickly became fierce rivals. Potanin himself torn relationship and immediately went on the offensive - challenged in a court sale of assets of NLMK - Refrigerator Plant "Stinol", set auditors against the plant. Lisin, in turn, bought the securities of Norilsk Nickel. But then the oligarchs agreed on division of spheres of interest.

Lisin repeatedly clashed with the governor of Lipetsk. The last conflict occurred in 2008, when Lisin claimed the governor's office. By the way, Lisin had been aiming at the governor's chair since 1998, when his candidacy was considered for the post of head of administration of the Lipetsk region, but then Lisin himself refused the nomination and supported an alternative candidate Michael Narolin. In 2002 everyone expected that Lisin would again put forward his candidacy in the gubernatorial race, but businessman back pedaled - according to the Kommersant, Lisin felt that the Kremlin would support Oleg Korolev. They even signed the settlement agreement. Korolev pledged to stop the information war against NLMK, Lisin — did not get nominate for governor post.
Kommersant, February 19, 2002

But in 2008 the oligarch still decided to catch up. However, it was not only because o f the unrealized ambitions. They said that Lisin went to the gubernatorial elections in order to get out of Izmailovskiy control, who began to behave particularly brazen after the death of their leader Malevsky. They said even Mobs on jeeps came to Lisin just like in "good old" times and demanded to leave the plant, as well as to pass reins of power to "Rumelko" ( "Russian Metallurgical Company"), in which actions of criminal authorities were placed.

During elections the main rival to the head of NLMK became acting governor Oleg Korolyov, a prominent advocate of workers. Lisin's election campaign was on the brink of a foul. One of the episodes of the election struggle nearly cost to Korolev the governor's chair. In November, 7 during a rally at the central square of Lipetsk, two unknown persons began to trample on Russia's flag in front of the rostrum, on which Korolev was staying, the flag was burnt. The amazed face of the governor was shown to the entire country. They commented that Korolev had no control over the situation in the area. As it turned out, the vandals that outraged the flag were employees of NLMK and acted on behalf of some of the Lisin's image-makers. Then Alexander Voloshin intervened in the conflict of oligarch and governor. Lisin was even suggested a position of senator, but he felt that the position was too small for him. They even said that Lisin had an audience with Putin, arguing he was ready for the regional politics. But then President recalled the story of the sale of plant Stinol (Lisin sold a profitable enterprise, and never paid credit to the state). As a result, the billionaire kept a role of "gray cardinal".

Lisin had never gone to the conflict with the authorities - Putin even gave him the Order of Merit. They say the billionaire established close ties with the Kremlin - in particular with the manager of President Vladimir Kozhin. Their friendship began in the Graduate School of the Academy of Foreign Trade, in which Kozhin Lisin and studied in Soviet times.

Creation of Mechel case was ascribed to Vladimir Lisin, it caused panic in the stock markets. Then Vladimir Putin sharply criticized the steel plant Mechel for selling coking coal on higher price to domestic enterprises than abroad. Russian actions started falling in price rapidly. They said the president complained to the principal client of "Mechel" - the head of NLMK.
«Lipetsk juggling "- The interviewer, 15.10.2008," Mechel got stormed and raged "-" Kommersant ", 24.07.08