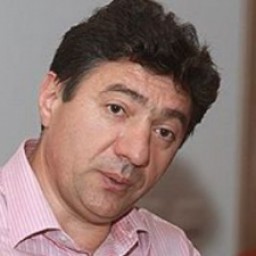 Bio:
Vladimir Pekarev was born on 4 November 1958  in Noginsk city.
In 1976 he started his career as a mechanic at Noginsk founding machinery plant, then he worked at Soyuzenergolegpromavtomatika production association. He worked as a tailor and a fitter at Noginsk garment factory.
By the end of the 1980s he had started his own business. He founded a tailoring cooperative  and managed some other cooperatives.
In 1997 he was appointed director-general of OST-Alco closed company. He was also elected to   Moscow legislature.
In 1998 Pekarev graduated from Institute of Management, Economics, Law and Informatics with a degree in global economy.
In 1999 he chaired the board of directors of OST companies Group that  produced beverages, now registered as OST companies Group closed company.
In 2000 he graduated from Russian Academy of Management.
In 1999, 2003 and 2007 he was elected to the State Duma.
In 2010  Pekarev earned 7.98 million rubles. According to his income declaration, he owns an apartment building measuring 675 square meters  and a 175-meter apartment, provided to Pekarev as a deputy. He owns Mercedes-Benz AMG car.
Pekarev is married and has two children.
Source: bfm.ru

Dossier:
In 1997  in the suburbs of Moscow several people got poisoned with vodka produced by OST-Alco company. Pekarev  was about to lose his licence to produce alcohol, but, nevertheless, he managed  to  convince regulators that the vodka had not been produced by his company, it had been counterfeited, while a junior school teacher and a hospital surgeon who had died of poisoning  had been alcoholics. To make himself absolutely safe Pekarev used his connections beacame a member of Moscow legislature. The authorities, however, did not leave him alone. In 1997-1998  financial and economic activity of OST-Alco was  inspected about 40 times, once by  minister of taxes and fees Boris Fyodorov.  In 1999, trying to avoid  court persecution,  Pekarev became a member of the State Duma and joined  the Committee on Budget and Taxes, a haven for all the lobbyists in the State Duma. As a Committee member  Pekarev became known for proposing to reduce the unified social tax for enterprises. Pekarev explained that inflation in the country had decreased, so the social tax should be reduced, as tax money was intended for  Pension Fund and Health Insurance Fund; since  the people of Russia had got richer they needed smaller pensions. Vladimir Pekarev proposed another bill, too. He complained  about  "consuming extremists", people who, in his opinion,  exercised  their consumer rights  too often, and  proposed to restrict their rights.  Meanwhile, Pekarev's persecution  was suspended.

By 2003  Ost-Alco company, located in the Moscow region, had paid not a penny of taxes. The company that had a 77 million rubles tax debt,  was not even included in tax list of  the Moscow region or the Central Federal District. Prosecutors and revenue service did not care about that, either.

Pekarev repeatedly dissociated himself from his own company and even applied to court for protection of his "good name" from "detractors".

In September 2008 Vladimir Pekarev received 70% of OST-Alco Private Enterprise LLC, operated by  OST Group, having signed a deed of gift with his wife. According to Pekarev, thus he demonstrated to creditors of OST-Alco company, that he was ready to take personal responsibility  for the debts of the wrecked company.   OST-Alco was to pay 800 million rubles to Noginsk tax office. All assets of the company, such as production line, buildings, land, accounts receivable and finished goods, were arrested.

In summer 2010 employees of  Petrovsky Distillery LLC,  one of the largest distilleries in Europe, located in the Ivanovo region, went on a hunger strike protesting against constant violations on the part of the  management. While managing the company through his wife, Pekarev  did not pay workers' wages for months, although he had enough money. An inspection showed that alcohol had been partially seized from the production line bypassing control system. That alcohol was used for producing cheap vodka of poor quality that later was sold illegally. It turned out that Pekarev's managers pushed employees of the plant to insist publicly on returning the licence after it had been withdrawn. Pekarev made his managers to file for bankruptcy.
Source: YouTube, 10 October 2010

In August 2010  Pekarev sold OST-Alco,  the main asset of OST Group, and  70% stake in OST Group of Companies to Real company in Kabardino-Balkaria. In July Real  arranged a merger between OST Group of Companies and  Geocom company. Global company was established then. But in early August Pekarev's sisters filed a claim for invalidation of the company restructuring. Experts agreed that Pekarev initially arranged that deal to dilute the stake of OST Group of Companies. Company restructuring was said to be a pretext for depriving minority shareholders of their stakes and withdrawing debt-burdened assets, as Sberabank demanded 316 million rubles of the company by a court action.

In October 2011, when Vladimir Pekarev was nominated for Moscow regional legislature, it turned out that Pekarev was associated with  nephew of a pharmacy tycoon Igor Bryntsalov, the chairman of regional  committee  of  United Russia. Igor Bryntsalov headed Pekarev's supporting bloc, while Bryntsalov's wife officially  owned enterprises of OST Group of Companies.   Ivan Zhukov, the deputy chairman of  Moscow regional legislature and the head of United Russia   faction in the State Duma, was a member of Pekarev's bloc, too.  Head of Noginsk district of the Moscow region  Vladimir Laptev was Pekarev's closest ally and business partner. It was Noginsk district where Pekarev first carried out  privatization and resale of the land in the Moscow region.  Investigating authorities doubted that Pekarev's operations, such as privatization of   Chapaevsky state farm, were legal. However, Noginsk prosecutors refused to bring an action against  Pekarev. It is noteworthy that in 2011 head of Noginsk prosecutor's office Vladimir Glebov   was put into prison.

Member of Moscow regional legislature and head of district office of United Russia Vladimir Polikarpov, the former co-owner of  OST-Alco distillery in Chernogolovka and a manager of OST Group of Companies, was Pekarev's  most loyal supporter. Mayor of Chernogolovka Yuri Filippov, a co-founder and a former co-owner of  OST Group of Companies, and mayor of  Balashikha Victor Samodelov, deputy director-general of OST-Alco distillery in Chernogolovka,  were Pekarev's staunch allies, too. During the elections to Moscow legislature Pekarev was also supported by head of Pavlovsky Posad district Andrei Lyutoyev, although Lutoyev had never worked for OST.  Nevertheless, he owed to Pekarev and Bryntsalov, as they bribed Pavlovsky-Posad officials to make Lyutoyev the head of the district.