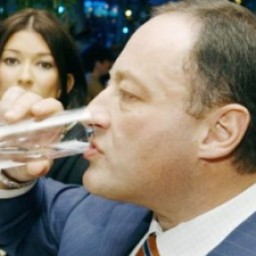 Bio:
Vladimir Iosifovich Slutsker, also Moshe Shlomo Slutsker, was born on 27 August 1956  in Moscow. In 1979 he graduated from Moscow Institute of Railway Engineering and got engaged in scientific research at the bridge engineering department  of the Institute. In 1985 he received doctor's degree in technics.
In 1979-1988 he worked for the bridge engineering department of  Moscow Institute of Railway Engineering.
In 1988 – 1993 he was the director of Ronar Projects  British  company that exported industrial equipment to the USSR, and later to CIS countries . He also headed  Acron Oil Trading Swiss company
In 1993-1998 was the vice-president of Intermedbank.

During 2005 he served vice-president of the European Jewish Congress (EJC).
In 2008  he represented  Russia in European Friends of Israel international parliamentary organization that brought  together over 1,000 leaders and members of parliaments of EU countries. Slutsker was a member of the Executive Bureau of the EFI.
Since 2006  Slutsker has been deputy chairman of the Joint Commission on national policy and relations between the state and religious associations under the Federation Council.
It was rumoured that at the end of the 80s Slutsker had emigrated from Russia and even had "received the Swiss or Italian citizenship."
Slutsker is divorced. He has two children, son Mikhail and daughter Anna. After the divorce they were left  with their father by Moscow court decision made in  March 2010.  In July 2011  Olga Slutsker recovered a judgement  in Khoroshevsky court of Moscow and the children were allowed to live with her.

In 1987-1994  Slutsker headed Ronar Projects British company   that supplied the USSR and then  CIS countries with industrial equipment. Reports say that in 1992 Slutsker  " got engaged in oil and metal  trading and sold both food production and construction equipment and technologies." Slutsker was appointed vice-president of Intermedbank founded in 1993.  In February 1998 its bank charter was cancelled for "violation of bank legislation''.

In November 2004  Slutsker was elected president of the Russian Jewish Congress. Reports say vice-mayor of Moscow Vladimir Resin masterminded that, as he was called " Slutsker's patron in politics."
Source: InoSMI.Ru, 1 March 2005

On 10 April  2005 general Anatoly Trofimov and his wife were killed before the very eyes of their 4-year-old daughter. Trofimov was security chief of Finvest  group founded by Vladimir Slutsker and Hambardzum Safaryan.

The Federal Security Service analysed phone calls made by Trofimov and his wife and came to the conclusion that former officer of the Federal Service special units Balashov, now Vladimir Slutsker's employee, had most probably committed the murder.

Investigators gave an account of the conflict between the owners of Finvest  in which the retired general unexpectedly got involved. Vladimir Slutsker suspected Hambartsum Safaryan of concealing his profit share. The relationship between shareholders got strained. For three years Trofimov, who was brought to the company by Slutsker, stayed away from any internal conflicts as he did not to put under threat his personal life and his family. But on 14 March   2004 after a phone call from an unknown well-wisher a dummy bomb was found in the attic of the Slutsker's mansion. It made quite a stir and rumours about "attempted assassination of the prominent member of parliament " were going around. Trofimov did not resist saying to "the prominent member of parliament"  that his frame-up had been made in a very stupid manner. In response Slutsker blamed Trofimov for "colluding with Safaryan" and asked him to return a card of assistant member of the Federation Council and get out.
Three weeks later  officers of the Federal Security Service detained two Slutsker's security guards who confessed to planting the bomb in the attic by Slutsker's order. They also claimed that  Slutsker had been present at that.

At night  after the detention  unknown attackers smashed the glass of Trofimov's car and thus tried to make him go outside the house. Four days later Trofimov was killed by ''a man with saltatory gait''   very similar to the gait of Slutsker's chauffeur.
Slutsker was the only person who refused to give any testimony to the murder pleading his parliamentary status.
Source: Antikompromat, 5 December 2006

In 2005  director-general of Alice Invest publishing house, editor of VTV TV-company and chief editor of Jeans magazine Oleg Lourie   published online an article that covered  Slutskers' business and pointed out his involvement in the murder of FSS general Anatoly Trofimov. Lourie was reported to demand 25 thousand dollars of  Slutsker "for removing materials from the site ".  He allegedly got 15 thousand.

In 2007  Lourie was prosecuted, but this fact became known only in 2008. Lourie himself regarded that as intimidation. He did not admit his guilt  and  in anticipation of being arrested  he wrote in his blog that "a certain high-ranking official had instituted proceedings against him" and that it had been"his revenge for a number of articles published three or four years ago". Lourie stated that publications had not been "directly related" to those who sent him to prison.

On 26 January  2008 Lourie was summoned to the committee of inquiry. There he was detained on suspicion of extortion and fraud. On the same day he was indicted for fraud and   Moscow court  gave sanction to his arrest. On 20 June 2008 Lourie's case reached the trial.

In 2006  Slutsker and businessman Aleksei Kozlov were business partners. They were co-owners of Finvest company. In 2007 Kozlov intended to go out of the business and withdraw his assets. As journalist Olga Romanova, Kozlov's wife, stated, "Kozlov made such a decision because of the murder of the Federal Security Service officer and security chief of the company Anatoly Trofimov and his wife, as well as because of a conflict between major shareholders."

According to Romanova, when Kozlov let Slutsker know of his plans, Slutsker threatened to "make short work of him''. In summer 2007 Kozlov was arrested on charges of fraud. In March 2009 Moscow court found Kozlov guilty and sentenced him to eight years of imprisonment. Kozlov pled not guilty and stated that the conflict between him and Slutsker should have been settled in civil court, but Slutsker had  turned it into a criminal case by clever string-pulling.

In 2010 Olga Romanova  applied to the Prosecutor General's office. She stated that the charge against her husband Aleksei Kozlov had been trumped up by Vladimir Slutsker' order. Slutsker refused to comment on her statement. Kozlov, who was at the moment  serving his term  in the colony, said he was willing to wait for a criminal case against former member of the Federation Council Vladimir Slutsker  "for years''.

In September 2011 Aleksei Kozlov was released from custody in the courtroom. His case was submitted for reconsideration. The Supreme Court allowed an appeal of Slutsker's lawyers. The judge held that in 2009  Kozlov had been prosecuted illegally and thus should be released.
Source: RBK, 20 September 2011