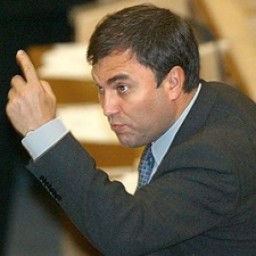 Vyacheslav Volodin (born 4 February 1964, Alexeyevka workers’ village in the Saratov region) earned a degree from the Saratov Agriculture Mechanization Institute in 1986. He studied Law at the Presidential Civil Service Academy in 1995. He holds PhD in Technical Sciences, and a doctorate in Law.

1990 member of the Saratov city council

On 16 April 1996 Volodin was appointed deputy governor of the Saratov regional government under governor Dmitry Ayatskov.

On 19 December 2003 Volodin was re-elected to the Forth Duma from the United Russia party list, where he represented Balakovo, Saratov region

In February 2009, Volodin became head of the department of State-building of the faculty of Public Administration of the MSU.

On 21 October 2010, Volodin was appointed deputy prime minister, chief of the government's staff and deputy head of the commission for modernisation.

Vyacheslav Volodin is a professor. He authored a number of articles in central press and in the press of the Saratov region, along with two books: Regional Legislature: Organisational and Legal Basis (1995), Local Self-Government in Russia (1994).

Order of Merit for the Fatherland, Forth Class (2006)

In 2006, 26 members of the State Duma (lower house of parliament) asked the Prosecutor General’s Office to probe into sources of income of the Duma’s deputy speaker, Volodin, after in February 2006 magazine Finans ranked Volodin the 351st on the list of the richest Russians with the net worth of 2.7 billion roubles ($90 million). The MPs asked prosecutors to compare figures in Volodin’s income declaration with the value of securities he owned. According to chairman of the board of Buket Group Vladislav Burov, Volodin owned stakes in two enterprises of the group, NZhK and Armavir MZhK, both fat-and-oil processing factories. Burov estimated the value of the securities as “no more than $10-15 million”.

A group of oppositional members of the regional legislature obtained a letter received from imprisoned Gevorg Dzhlavtyan, senior official in the Saratov region, accused of committing crimes under Article 285.3 of the RF Crime Code. During 2001-2004, Dzhlavtyan used to serve as a minister of the regional government and advisor to governor Ayatskov, responsible for road building. In the letter Dzhlavtyan described himself as a victim, suffering for other people’s sins. He said that back in 2002 Vyacheslav Volodin formed a criminal group, involved in kickbacks for getting funds from the federal budget. At first, the size of kickback was 5%, and then it increased to 6%.

In 2006, it emerged that Volodin owned shares of Solnechnye Producty Group. Analysts estimated his wealth at $10-95 million. Solnechnye Producty consists of vegetable oil factories in Moscow and Saratov. Volodin was a fellow student of the founder of the mayonnaise empire Vladislav Burov, both Volodin and Burov are natives of Saratov. Burov, a graduate of the faculty of Physics, was a trade union functionary at the Saratov State University, whereas Volodin was a trade union functionary at the Mechanization Institute. Both were elected to the Saratov legislature at the same time. Burov left politics to open his own business (trading), while Volodin became vice-governor under Ayatskov.

On 9 August 2007, Saratovsky Rasklad newspaper run an article, alleging that deputy speaker of the State Duma Vyacheslav Volodin had injured a woman while spear fishing on Princess yacht with the fellow members of the United Russia party in the Saratov Region. The woman injured was the director of Nadezhda LLC, Anna Molodkina.

It turned out later on that nothing was true in the article about the spear fishing but a singe fact. A woman was indeed injured by a harpoon. Vyacheslav Volodin’s response was immediate. A few hours after the article was published, the Prosecutor General’s office opened an investigation into the case. A blow delivered by Volodin to the newspaper was incomparable to real threat to Volodin’s public image. However, by taking decisive measures Volodin helped out his old business partner Vladislav Burov, president of Buket Group. He was linked to the accident during the spear fishing. Volodin did not take part in it.

In November-December 2008, Volodin was embroiled in a number of political scandals. One of them followed a contest that had taken place in a Saratov secondary school. Schoolchildren had been offered to write a poem about the United Russia party. In a notebook, where the information about the contest appeared, there were poem about Volodin.

In 2008, a video of the Saratov Central state TV station appeared on the internet, showing the awards ceremony of the Best School Class contest. At the event, pupils read out laudatory poems about the United Russia political party and Volodin and sang thanksgiving praises to the achievement of the party: “…It was Volodin who ordered to find our best class”.

On 7 November 2009, Valery Rashkin from the Communist Party clashed with head of government’s administration Vyacheslav Volodin. During a rally, the member of the parliament, secretary of the Central Committee of the CPRF for personnel, accused Volodin, along with several other statespersons, who “committed coup-d’etat in 1991”, of “at least six crimes committed against the people of Russia.”

Volodin, who was also a top official in the United Russia party, took offence at the allegation and filed a libel lawsuit, which he won. In June 2010, the Court of Saratov’s Leninsky District ordered Rashkin to pay one million rubles (around US$32,000) as compensation for defamation and moral damages.

Vyacheslav Volodin has gained the reputation for tough actions against the media. He filed 11 defamatory lawsuits. As a result of Volodin’s interference, communist MP Valery Rashkin was fined to 1 million roubles ($32,000), journalist Vladimir Spiryagin was sentenced to cleaning steets, whereas former minister of the Saratov Region government Dzhlavyan and journalist Eduard Abrosimov, who wrote about an injured lady, got prison terms. The results of Volodin’s affords could be seen everywhere in Sartov, in the streets, at the local university, student’s halls or hospitals. On the walls of the building billboards appeared, saying that it was United Russia that had financed construction or renovation works. The billboards contained also portraits of Vyacheslav Volodin. Many people in Saratov were made to believe that Volodin had invested his own money in the city.

After a dean of the faculty of History in the local university criticized the United Russia party boss for construction faults in the new university building, he was fired. Despite the fact, that the dean’s office is elective, “Volodin demanded that the rector of the university should suspend Doctor of Historical Sciences, professor Velikhan Mirzekhanov from his post,” wrote the colleagues of the ill-fated dean. To fulfill Volodin’s wishes, the rector fired Mirzekhanov and dissolved the whole faculty of History, whose head dared to defy the secretary general of United Russia.