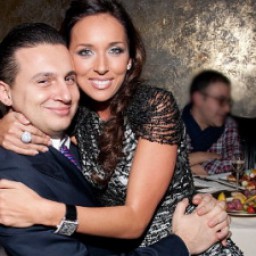 Yan Abramov was born in Baku on 4 December 1977. His father is a famous banker and businessman Rafael Abramov. After Yan finished a secondary school in Baku, he went to the USA to pursue his education. Besides Russian, he speaks fluent English, Spanish and Portuguese.

In 2001, he took part in establishing Russia-U.S. Business Council. Later on, he began to publish the magazine “America Illustrated”, together with Konstantin Borovoi.

Since 2002, he has been the chairman of the board of “New Technologies” Open JSC and has headed Moscow Fireworks Association.

“New Technologies” Open JSC, led by Yan Abramov, has set up production of so far the most popular traumatic weapon in Russia - Osa (“wasp”).

For a long time, Abramov was one of the most eligible bachelors in Russia. In 2006, he married Russian popular singer Alsou (daughter of the oil baron Ralif Safin), who gave birth to two daughters.

Fireworks business of Yan Abramov (his friends call him Yanik) was established with support from his relatives, and its turnover is incomparable with the turnover of his clan.

In 2004, he appeared in the high society for the first time. At Ferrari-Maserati party in Moscow’s Tverskoi Proezd Street, Yanik was introduced as the partner of Kseniya Sobchak, daughter of Yeltsin’s crony Anatoly Sobchak.

Then, Yarik brought Mariah Carey to Russia and, to the amazement of many, showed her many attentions, and even launched fireworks in her honour.

On 18 March 2005, editor of the investigative department of the newspaper “Express Gazeta” Vladimir Pozharsky together with his colleague Dmitry Lifantsev took pictures of the builders’ knocking off the window frames of the hotel “Rossiya” in Moscow, which was going to be demolished. While Pozharsky was choosing the right angle, a luxury car slowed down beside him. With the window of the car put down, Yan Abramov, who was in the car, grabbed the camera and pulled it inside the car. Pozharsky’s hand was pulled into the car up to his elbow. “Drive!” Abramov said. The driver stepped on the juice, and Pozharsky was dragged behind the car. By a miracle, the journalist did not break his hand, but he stroke his head against the door. Having gone a few metres, the car stopped.  After Abramov realized he had been unable not take away the camera, he removed the flash card. Having left the robbed Pozharsky on the roadside, the car drove to the area that was cordoned off by securities. Armed with carbines, the securities surrounded journalists who run up to Pozharsky and, having hanged to their arms, dragged them to the hotel. One of the journalists, Rustam Solntsev, was punched in the stomach twice. Moreover, his wallet and video camera disappeared.

Vladimir Pozharsky reported to the police. The criminal case was opened. A police detective explained, “Abramov’s actions are classified as mugging and are punishable according to the Criminal Code by three to seven years in prison”.

On 18 March 2006, singer Alsou married businessman Yan Abramov. Crème de la crème of all Russia were invited to the wedding. The mayor of Moscow Yury Luzhkov handed a marriage certificate. The relatives and friends presented the couple with a Bentley, jewellery and a country house. The ceremony took place in the state central concert hall “Rossiya”, the largest in the city. The couple spent their honeymoon on the island of Fiji.

In 2006, a group of young sportsmen picketed the local legislature in a Siberian city of Gorno-Altaisk in a protest against possible re-election of Ralif Safin as a representative of the legislature of the Altai Region in the upper house of the parliament. The picket was held without the permeation, and the local legislators, returning to work after lunch, looked surprised. The young men unrolled the large sheets of Whatman paper with the slogans: “Safin, return our money!” “Shame on Safin” and “Don’t trust Safin”. They also distributed leaflets, containing the story of wedding of Safin’s daughter with banker Yan Abramov. According to the leaflet, Safin spent $15 million on his daughter’s wedding, while sport in the republic was in utter neglect.

On 11 September 2008, the police, together with the prosecutors, search six markets of AST Group, including Evroaziya market and Sino-Arab market. Simultaneously, a branch of the bank “Mestny Credit” (MK-bank), situated inside the market “Novy AST”, was searched. “Turnover from selling the smuggled goods was accumulated by a single company that then laundered the money and distributed them between the bank accounts. We searched the office of the bank, because it is located on the territory of the markets, and many vendors use it,” said a source in the police.

The chairman of the board of the bank and its co-owner is a businessman Rafael Abramov (father of Yan Abramov).

The searches were part of the major investigation, launched in spring 2005. At that time, the police found 29 wagons full of the goods smuggled from China. They were bound for a military base of the FSB near Moscow.

Singer Alsou together her husband Yan Abramov and two daughters are going to move in a luxury country house in the posh Rublyovka area. The house in Rublevo-Uspenskoye High Road will have been completed by the end of this year.

Currently, the singer and businessman’s family dwell in Alsou’s parent’s 3-storey house. Before moving there, the singer’s family lived in a residential complex “Triumph Palace” in Moscow.