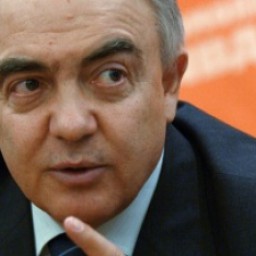 Yuri Kalinin was born on 28 October 1946 in Pugachev in Saratov region. In 1979 he graduated from Saratov Kursky Law institute.

In 1970-1988 he worked in GUIN, what is now the Federal Prisons Service (body of the Ministry of Justice)

In 1988-1992 he worked in the central administrative office of the USSR Ministry of Internal Affairs and Ministry of the Interior of Russia.

In 1992-1997 Kalinin headed Federal Prisons Service of Russia. In May 1997, he was removed from office due to alleged financial abuses that were not confirmed during the investigation that followed.

In 1997 he was deputy head of a Ministry of Justice department.

In 2009-2010 he was deputy minister of Justice of the Russian Federation.

Since March 2010 he has been representative of Penza region Legislative Assembly in the Federation Council of the Russian Federation Federal Assembly.

Order of merits for the Fatherland, II degree

Order of merits for the Fatherland, III degree

Order of merits for the Fatherland, IV degree

Order of the Red Banner of Labour

Distinguished Lawyer of the Russian Federation (2004)

In May 1997, after a probe into GUIN, Minister of the Interior Anatoly Kulikov ordered to remove Kalinin from office for alleged financial abuse. But Prosecutor General’s office found no evidence proving the allegations that for a toll Kalinin concluded dubious agreements with private companies that cooperated with GUIN.

Since 2004, media began to mention Kalinin in its reports more and more often. That happened because of the increased attention to correctional institutions, the situation in which grew worse and worse. In 2006 a human rights activist Lev Ponomarev said that with Kalinin heading the Federal Prisons Service 40 torture zones were established in Russia. Ponomarev called the head of FSIN the author of a sadistic system for control and suppression of the prisoners.

In 2006 a prisoner in Perm region sent a letter to Vladimir Putin complaining about the conditions of detention. A large-scale inspection of FSIN facilities in Perm region followed. But Kalinin retained his post, and the conditions in Russian prisons and penal colonies still left much to be desired, and still have not improved much.

“To end all speculations about the conviction of Khodorkovsky, including the threat to his life, we decided to put him in a cell for solitary confinement. There he will be safe”, said Kalinin, adding some details, “the prison administration has a statement in which Kuchma (the inmate that attacked Hodorkrvsky) reported abuse by Khodorkovsky and disclosed other details of their relationship."

Such openly provocative statements caused a strong reaction from Khodorkovsky's lawyers. "This is an absolute, obvious lie. This is not consistent with what was originally said by Kuchma in the explanations,” said the lawyer, Genrikh Padva. "The attack on Khodorkovsky was preplanned and was used as a pretext for solitary confinement. This is a punitive measure for physical and psychological pressure” said the lawyer, Yuri Schmidt.

In 2008 Kalinin justified actions of prison guards in Kopeysk in Chelyabinsk region, who beat four prisoners to death. Having visited the colony, Yuri Kalinin met with the governor of Chelyabinsk region, Petr Sumin. Head of the Federal Penitentiary Service said that the use of batons by the guards was justified.

Andrei Vavilov prematurely left the Federation Council and his seat as representative of the Legislative Assembly of Penza region was filled with former Deputy Minister of Justice Yuri Kalinin.

In 2011 Kalinin became the first deputy chairman of the Federation Council for Cooperation with the Accounts Chamber of the Russian Federation.