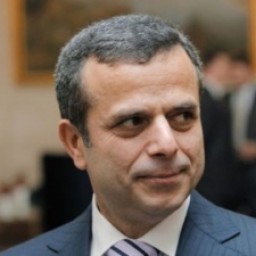 Born in Krasnaya Sloboda village in the north of Azerbaijan on September 8, 1966.

Father Bension was the shoemaker and had five sons whom he accustomed to craft since childhood. Zarah sewed hats — well-known "caps-airdromes" which were on sale in the market in the neighbor Azerbaijan city Cuba.

17 years old (in 1983) Zarah left to Moscow where his two uncles and the cousin had business.

In 1993 he registered firm "Iliev" supervising the part (15 hectares) of Cherkizovsky market in Moscow.

In 2000 Iliev’s firm got 57 % of AO «Wholesale-retail shopping center "Moscow"», owning premises at the former Moscow ball-bearing factory in Lublino, subsequently converted under trading-market center "Moscow" with the area of 200 000 sq. meters. The second proprietor of AO "WRSC "Moscow» is the Government of Moscow.

In December, 2000 he created the company «Safra Tool».

In 2005 together with Zurab Tsereteli he created the company «Gorod Chudes».

Iliev arrived to Moscow at the age of 17. At first he delivered cognac to the shop at Lubyanka, and in the beginning of 90’s he purchased several trading containers in the Izmailovsky market under the scheme existing in the capital markets and attained the right to rent them.

In 1993 Iliev registered "Firm Iliev" which began to supervise a part of Cherkizovsky market. Operating firms «Old AST» and «New AST» of his companion and partner Telman Ismailov were located nearby. The known sportsman, the trainer of Russian national team on free-style wrestling Omar Murtuzaliev became the general director of "Firm Iliev".

In summer, 2000 Iliev’s company "Ilion-trade" got a controlling interest in AO WRSC "Moscow", the civil-engineering project of a trading complex in Lublino. In December, 2000 the company «Safra Tool» was created to manage TC "Moscow". Till the end of 2003 investments for Iliev’s new projects passed through it. Additional issues were distributed on the closed subscription between physical persons. The same company owns the large centers «Electronic paradise» and "Panorama".

In October, 2002 "Safra" redeemed building of "Eleron" on Kashirsky highway which subsequently was transformed into the biggest automobile hypermarket in Europe "Moscow". To attract customers Iliev patented and realized rotating construction of seven chained blinking cars.

«Cherkizovsky market» under the decision of the authorities was going to be pulled down in 2003. Here it was decided to construct offices, habitation and trading complexes. But decision performance was postponed, ostensibly, because of impossibility to solve an issue with numerous tenants quickly.

In 2004 the company «Industrial food complex Arbat», registered by Iliev in 1992, got a block of shares of Interprombank.
Source: "Russian Forbes" from 02.2006

In 2004 furniture center "Grand" got new owners. At first names were not discovered, it was said to be one of the owners of "Cherkizovsky" market, and also the owner of shopping center "Moscow". However everyone said that the center was purchased by Iliev. The same secretary, as in "Grand" answered the phone in Iliev’s reception.
Source: "Vedomosti", 10/18/2004

Iliev changed the concept of "Grand": now not only furniture was on sale, but also the hypermarket "Elektroplaza" by company "Eldorado" and a huge carpet shop Art de Vivre were located there.

Together with Iliev one more member of diaspora of mountaineers – God Nisanov supervised "Grand".

In February, 2005 Iliev, together with Zurab Tsereteli, created the company «Gorod Chudes», Nisanov became its head. The company was engaged in the project of development of Nizhniye Mnevniky where Tsereteli received the land site for the construction of "Russian Disneyland».

In May, 2005 in the territory of Baku factory of leather products the leather-tailoring factory "Gene-deri" was opened. Iliev helped his brother Yarukhom, the co-owner of the enterprise, with this project. The fact that Iliev had business with relatives, and even pulled them behind himself, was considered by some people as his lack.

In November 2005 Nisanov on behalf of OOO "Biscuit" got hotel-monument "Ukraine" at the Moscow government
Source: "Russian Forbes" from 02.2006

In the summer of 2006 there was an explosion in the Cherkizovsky market, 10 persons were lost and 55 injured. The explosive worked out in trading rows of market "Eurasia". The basic version was "commercial competition» of the diasporas working in the markets of Moscow. Firm "Iliev" officially didn't concern this site.
Source: "Vedomosti" from 8/22/2006

In June, 2006 assistant head of Rosprirodnadzor Oleg Mitvol together with the deputy of the State Duma Alexander Khinstein and the deputy of Moscow City Council Sergey Mitrokhin tried to get to construction site of the shopping center "European" at the area of Kievsky station which was realized by Iliev, but they were not allowed to by employees of private security company. Khinstein’s hand was pinched with the gate, and concrete dust was poured to others. Khinstein and Mitvol considered building as illegal; it was supposed that it could lead to a collapse of the underground and environmental contamination. They came to building site with the order of Rosprirodnadzor for check. Mitvol also believed that the chief of the Municipal Department of Internal Affairs of Moscow Vladimir Pronin was personally interested in building as his son was the co-owner of ZAO «Kievsky square» which builds up TEC "European". In mass-media there was the big scandal which did much noise, connected with violence to Mitvol and deputies, however soon it calmed down.
Source: "Kompaniya" from 7/14/2006

Soon the Office of Public Prosecutor filed criminal charges concerning security guards of TC "European", PSC "Lonvik" which did not allow Mitvol to the construction site.
Source: "Gazeta.ru" from 7/17/2006

The case was closed in favor of the builders; in October 2006 Company «Kievsky Square» won from nature protecting Office of Public Prosecutor.
Source: solomin, 11/17/2006

Before complex examination of building object was executed by which results it followed all necessary norms. Most likely, it turned out because during holiday Iliev together with Nisanov could organize a coalition with other Mitvol’s foes. Even Khinstein changed his mind. He declared that he was happy with results of examinations.

Thanks to Iliev and Nisanov, ganging up against Mitvol, scandalous details of his bulldozing to summer residences of well-known people in Moscow suburbs, and also the company "Sakhalin-2" got to mass-media. Office check of Mitvol and campaign for his discharge from a post began.
Source: solomin from 12/22/2006

After opening of TC "European" Iliev and Nisanov began to demand much of the tenants: they were obliged to show financial documents, to open business and property structure. Such approach was caused by careful attention of the authorities to TC. Iliev and Nisanov began to show such scrupulousness right after purchase of hotel "Ukraine", a historical monument of Moscow. The importance of the project forced them to become more attentive to the reputation.
Source: solomin from 12/14/2006

In 2007 Yury Luzhkov put an end to disputes on destiny of the Cherkizovsky market, having signed the order about prolongation of rent term of its territories till 2009. Actually the authorities surrendered to Iliev and its diaspora. The head of Moscow Department of the consumer market and services Vladimir Malyshkov officially declared that the market would be closed step by step. Instead of bazaar authorities decided to build up a new housing estate. Thus, the market still remained with former owners. It’s clear that such a favorable decision was caused by good relations of Iliev and his companions: on the eve of decision-making they were noticed driving on the cars to the mayoralty.
Source: solomin from 7/30/2007

In November, 2007 one of hotel "Ukraine" towers fell down. It was found out that it was connected with non-observance of specifications even at its building. But campaign against Iliev and Nisanov aimed to take away their business was started. The objects of real estate constructed by them regularly became objects of interest of different groupings. The tower collapse took the campaign to the new level.

In 2008 businessmen and their families were threatened with physical violence. They applied to police. The group of malefactors was detained as a result and investigation concerning organizers of a crime began.
Source: solomin from 6/5/2008

By summer of 2009 Cherkizovsky was closed. The day before Iliev with his partner Telman Ismailov, the head of AST group had disagreements which reasons it was not known about.
Source: "Interlocutor" from 6/16/2009

Ismailov immediately faced problems: it was found out that in the Cherkizovsky market, in the territory presumably supervised by Ismailov, there were illicit goods. A criminal case was brought against AST. The market was closed, the goods was partly confiscated. At restaurant "Prague" belonging to Ismailov, searches took place.

By then Cherkizovsky was closed for ever.

Iliev’s success factor, according to many experts, is that the partner in many projects is Vladimir Putin’s friend Ilgam Ragimov. His personal office is located in restaurant "Venice" belonging to Iliev and Nisanov.
Source: "Sobesednik" from 8/4/2009