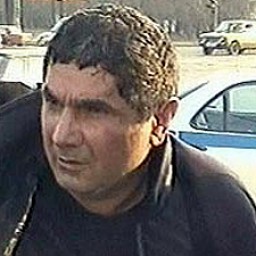 Zakhary Kalash (according to some reports, in 2005 he changed this name to Kniazevych) was born in 1963 in Tbilisi. The media also refers to him as "Shakro Jr." or "Shakro-young." He has dual nationality - Russia and Georgia.

According to several media, as well as to information of Russian law enforcement officials, whose statements are quoted by the media, Kalash is one of the leaders of organized crime in Russia, “general of Russian criminal underworld”, and " thief in law ". According to these data, Kalash at different times was considered the leader of the "Solntsevskaya," "Izmailovskaya" and "Bratskaya" organized criminal groups. At the same time he was engaged in restaurant and hotel business, as well as real estate transactions.

In 2000, after three unsuccessful attempts on his life, Kalash left Russia and settled in Spain. According to Spanish law enforcement officials, he led an organized criminal network "Clan of the Eleven”, he also was one of the leaders of the Russian-Georgian mafia, operating on the Spanish resort of the Costa del Sol. He had extensive connections to criminal groups in Russia and other CIS countries.

In 2005, Kalash left Spain after a large-scale operation of the local police, entitled "Wasp". Then the Spanish judge Fernando Andreo ordered an international arrest warrant for Kalashov. In May 2006, Kalash was detained in the United Arab Emirates (UAE). A month later he was extradited to Spain, where he was brought before the court. In this regard, the media noted that the Russian bureau of Interpol did not send the request for extradition of Kalashov from the UAE to Russia.

In October 2006, Kalash was sentenced in absentia by the Tbilisi City Court and sentenced to imprisonment for a term of 18 years.

On November 23, 2006 during a meeting with Kalashov in the Madrid prison Soto del Real, a prominent Russian lawyer Alexander Gofshtein was detained. According to Spanish police, Gofshteyn passed Kalashov’s orders outside the prison, and transported large sums of money belonging to criminals from Russia to Spain. Along with Gofshteyn nine people were detained, including Oleg Vorontsov - in 1996 Adviser to the campaign headquarters of President Boris Yeltsin, a merchant, and a member of the International Olympic Committee.
Source: lenta.ru

Kalash was a defendant in high-profile criminal case involving a duty to the company AvtoVAZ.In 1993-1996, the company experienced cash shortages, while other companies owed AvtoVAZ considerable amount of money. The authority of Togliatti, Alexander Vogel (Fox) decided to take advantage of the situation and suggested AvtoVAZ’s leadership to recover the debts for fees.
Source: Kommersant № 236 (2121) on 16.12.2000

AvtoVAZ concluded a formal agreement with OOO "Kolorit", that was controlled by Vogel, under which the right to recover the debts passed to "Kolorit". Then Vogel included other firms in the list that had either paid off to AvtoVAZ some time before, or were going to do it, and he presented the situation so that it was he who recovered the debts of those companies and charged fees. The fees were paid in a form of expensive cars mostly that were sold and the money was cashed in the Moscow banks (OOO "Vertex", OOO "Dores" and OOO "Oldar") controlled by the thieves in law Jalil Dzhendoyan (John) and Kalashov. Togliatti crime boss Sergey Ilyin was also connected to the fraud gang. Thus, the criminal group "earned" about 120 million rubles. The debtors confirmed that no one had beaten the money out of them.
Channel: Kommersant (Samara) № 239 (3078) on 22.12.2004

But over time, the criminal group has become at odds. Vogel wanted to take 50 percent of revenue, John and Kalash were against, Ilyin also stood on their side. Therefore, Vogel concluded a new agreement between AvtoVAZ and "Dinamika", controlled by him; its director was James Razbegin. Under the contract, "Dinamika" was entitled to claim debts of 38 companies amounting to 130 million rubles. The work started on the same lines, but secretly companions Vogel.

When the first arrests of members of the fraudulent group had begun, Jacob Razbegin disappeared. The witness in this case was Julie Styazhkina, the chief accountant of one of the companies-debtors "Warranty-2" was found murdered in a forest near Togliatti. Dzhendoyan agreed to cooperate with investigators and was killed as well. In August 1997, Ilyin was killed.
Source: Kommersant № 236 (2121) on 16.12.2000

In autumn 1997, following the results of a special operation by MIA "Cyclone" a criminal case was instituted on the above-mentioned contracts. Vogel, Kalashov and Razbegin were charged with fraud and forgery.Vogel was also shot. They failed to prove the involvement of Kalashov to any of those crimes. As a result, only Razbegin was convicted to a three-year imprisonment for fraud.
Channel: Kommersant (Samara) № 239 (3078) on 22.12.2004

Zakhary Kalash, being a well-known thief in law, has often appeared in the field of attention of the media, police and competitors from the thieves environment.

In January 1998, Kalash together with criminal authority Ded Hasan organized a meeting of thieves in the Rostov city of Shakhty to determine who will be an authority in the region, but the police prevented it.

In April 1999, Kalashov was detained at the casino "Crystal" in Moscow, and then the police found 33.5 grams of hashish. Prior to that, Kalash had been tried three times already, on this reason he was in the focus of the law enforcement agencies’ attention. On the night of detention Kalash smoked hashish in the casino, which was the reason for his detention. Kalash was brought to police station #37, where he was detained for ten days. He himself claimed that the drugs had been planted by the police. Soon after that Kalashov was released.
Source: "Kommersant» № 66 (1710) on 20.04.1999

In the second half of the 90’s, after several attempts on his life, Kalash left Russia. He headed the criminal group in Spain, on the outskirts of the Costa del Sol. In 2006 he was arrested in the UAE, being internationally wanted by Spain on charges of money laundering. Kalash drew the attention of Spanish law enforcement officials in June 2005, when the famous large-scale operation "Wasp" was held, aimed at the capture of the representatives of the Russian mafia in Europe. Then, 30 representatives of Russia and Georgia were arrested, all on charges of laundering money by investing in real estate - villas in the resorts of the Mediterranean. They failed to catch Kalashov, but he was put on the international wanted list.
Source: Kommersant № 81 / C (3412) on 10.05.2006

The former FSB Lieutenant Colonel Alexander Litvinenko played an important role in the arrest of Kalashov, who had passed information to British and American intelligence agencies that Kalash was an agent of the GRU (Main Intelligence Directorate), and worked with the Kurdistan Workers Party, which was considered a terrorist organization, maintaining large military bases in Iran and Syria and trading weapons in these countries.
Source: Forum.msk.ru from 09.11.2009

The arrest of Kalashov led to the criminal war in Russia. His companion Aslan Usoyan (Ded Hasan) put Lasha Shushanashvili (Rustavi) to temporary rule the empire of Kalashov. The leader of another gang, Tariel Oniani disagreed, and tried to discredit Lasha. According to one version, this confrontation led to the murder of mafia boss Vyacheslav Ivankov (Jap), supporter of Ded Hasan.
Source: Rosbalt from 02.11.2009

After having been detained in the UAE Kalash was extradited to Spain. According to Spanish police, he led the group, and most of its members were detained during the operation "Wasp".
Source: "Kommersant» № 104 / B (3435) on 13.06.2006

The Spanish authorities charged Kalashov with trade in arms, drugs, human beings, extortion of protection to entrepreneurs engaged in banking, restaurant business, refining, trading in metals and wood. They also believed that there were funds going to Spain from the capital's three casinos under the control of Kalashov. No taxes were paid for that money; it was used to acquire property through the companies established for this purpose - Sunnivest 2000, Elviria Invest, Megrisa, Megabetta V and N, Inmboliarios Estepona, etc.
Source: Rosbalt from 02.11.2009

Suspects claimed Oleg Deripaska was among the participants of money laundering. Investigators also believed that his companions Cherney and Iskander Makhmudov were also implicated.
Source: GZT.RU from 10.12.2009

With regard to the case of Kalashov another 11 people were arrested on suspicion of money laundering, among them Oleg Vorontsov, a former adviser to Boris Yeltsin, Mikhail Mdinaradze, Secretary of Kalashov, Konstantin Asatiani, property manager, employee of the tax service - Ascencio Carlos Fernandez, the loan officer Luis Ignacio Ballesteros Reda , bank employee and a relative of the wife of Oleg Vorontsov - Angel Blanco Y??ez.

According to the Spanish press, the detainees had been preparing Kalashov’s escape from Pre-Trial Detention Facility. No obvious evidence of this is given; it is known that at first they wanted to release Kalashova on bail by legal means. Also, the Spanish press believed that the supporters of Kalashov covered the tracks of his criminal activities by forging documents.

Even the lawyer of Kalashov, Alexander Gofshteyn was detained. He was suspected of meeting Kalashov in prison to transmit his instructions to the companions at large, as well as sending large sums of money for Kalashov. Suspicions appeared because of the wiretapped talks of Kalashov with his lawyer, he haв conducted his business for many years and came to organize the defense. The investigation concluded that the relationship of Gofshteyn and Kalashov were beyond the relationship between an attorney and a client.
Source: Gazeta.Ru of 24.11.2006, “Argumenty nedeli” from 30.11.2006

The prosecutor claimed for 7 years and three months of imprisonment for Gofshteyn and a fine of 530,000 euros; while for Kalashov - 12 years and two months in prison and a fine of 32 million euros. It was decided to interrogate the colleague of Gofshteyn, Alexander Padua to be a witness.

In March 2010, Trial Chamber of Spain unexpectedl released Kalashov on bail of 300,000 euros on the eve of his sentencing on charges of money laundering and the organization of criminal groups. He was barred from leaving Spain, but foreign journalists believed that nothing could interfere Kalashov from escaping.
Source: Kommersant № 37 (4337) on 04.03.2010

In June 2010, the Spanish court sentenced Kalashov to 7.5 years of imprisonment and a fine of 25 million dollars. He was found guilty of money laundering and the organization of criminal groups.
Source: k-Online from 01.06.2010

The lawyer of Kalashov, Alexander Gofshtein was acquitted. The verdict to Kalashov stated that he would be expelled from Spain as soon as he serves three-quarters of the sentence. By the time of sentencing he had served a half of it. Before the court adjudicates the claim, he stays at large.

The Georgian authorities were also going to attain the extradition of Kalashov after bringing in a verdict, as early as 2005 he was sentenced in absentia to 11 years of imprisonment under the Georgian law according to which defendant can be convicted not for a specific crime, but because of being a member of a criminal group.
Source: GZT.Ru from 01.06.2010